Product Manager Tessa Cooper left FutureLearn, only to come back a year later, in this post she explores what she's learnt since returning.

Product Manager Tessa Cooper left FutureLearn, only to come back a year later, in this post she explores what she’s learnt since returning.

I left FutureLearn a year ago to pursue an opportunity at Comic Relief. A few months later though it struck me how much I missed the incredibly talented team I’d left behind, and how much I longed to be working back at a company where I felt I could make a real impact on a mission that matters to me.

When I discovered that FutureLearn were expanding, I jumped at the chance to rejoin them. I’m now the Product Manager for our newly formed team focusing on Partner Experience. And to follow up from the post I wrote 18 months ago I thought I would reflect on some of the things I’ve learnt (or re-learnt) since I returned.

Good thing come in small packages
When I left FutureLearn the product team was still one large team of 25 people. Stand-ups were becoming cumbersome, not everyone had the chance to talk in retrospectives and planning was being done in dribs and drabs. The biggest and best change is that the team is now split into five individual team: four product teams with roughly five to six developers, one designer and one product manager in each, plus a fifth data team. Having small teams enables people to work more collaboratively, to have their voice heard in meetings and to feel like they can make a difference on the product. And most importantly it helps teams to build up trust with the people they are working with.

Growing teams require strong leadership
No-one in a leadership role can be perfect, but in returning to FutureLearn I’ve realised that those leading the team are pretty nifty, particularly when it comes to growing the company. They’ve worked hard to embed a culture where teams feel responsibility for their work, where anyone at any level can challenge and be challenged. As we grow they aren’t trying to micro-manage but instead focus on setting ‘the big picture’ and trusting the people they’ve hired to make the right decisions. And in turn everyone gets to lead on stuff in their own small way – whether it’s through making a change in our process, mentor someone else, or volunteering to organise a talk or a learning hour. Joel, our CTO, once shared this video with me which I think sums up this type of leadership nicely.

There is no escape from meetings
Even in a relatively small company I’ve learnt that there is no escape from meetings. Meetings are a bugbear for almost everyone, in any type or size of company. But it’s important for people not to become complacent and simply accept that this has to be the case. In many instances meetings are unavoidable, but you can make them better and more productive through having a strong facilitator (at FutureLearn members of the team take it in turns to facilitate each other’s retrospectives and we are trying apply this to meetings more generally), keeping to time and focusing on the purpose for the meeting. Like most companies, we’re still grappling with this at FutureLearn but I hope that we can make some positive changes to the way we do meetings.

The biggest hurdles are always still to come
It turns out that no matter how big or complicated the thing you are working on now is, there will always be bigger hurdles in the future. As we grow our platform, our courses, our partners and our team, the problems we face are becoming bigger and more gnarly. There is always a risk that as things grow that stuff becomes too complex and we forget the real reason why we were doing it in the first place. We are trying hard to make sure that we continue to keep things simple. And that with everything we do we aim to bear our mission in mind and focus on the problem we are trying to solve. There is so much we could do and so many routes we could take but it’s important that we do not lose sight of the end goal. 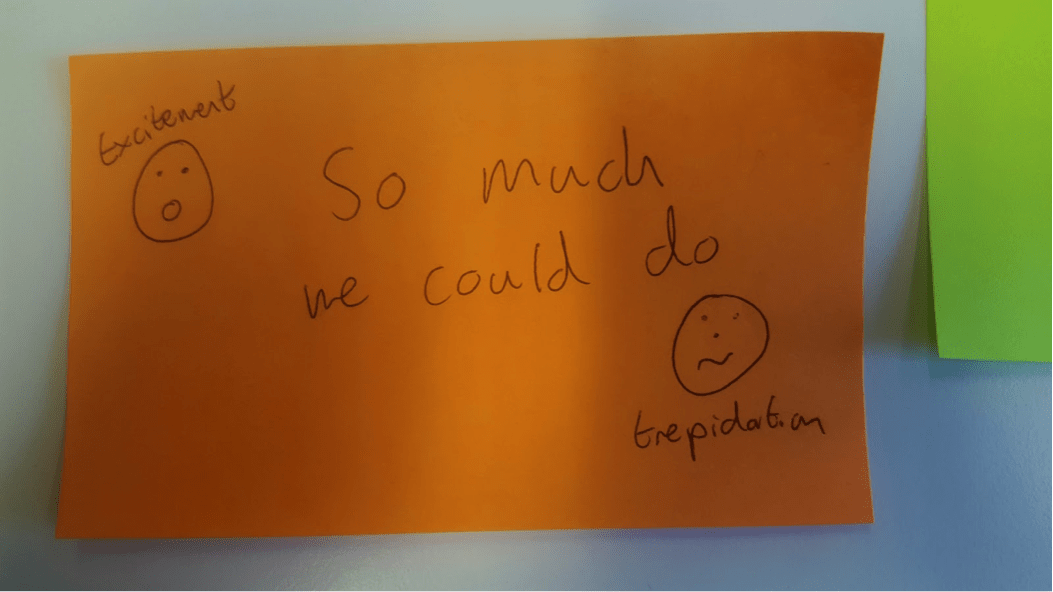 When you’re in startup mode everything feels like it should be celebrated. Everything is new territory. Everything is exciting and the moments to high-five (if you are that way inclined) are endless. But now that FutureLearn is maturing I worried that the opportunities for celebrating might have dwindled out. Thankfully I couldn’t have been more wrong. Most of the releases which are mentioned on Slack get this kind of response: 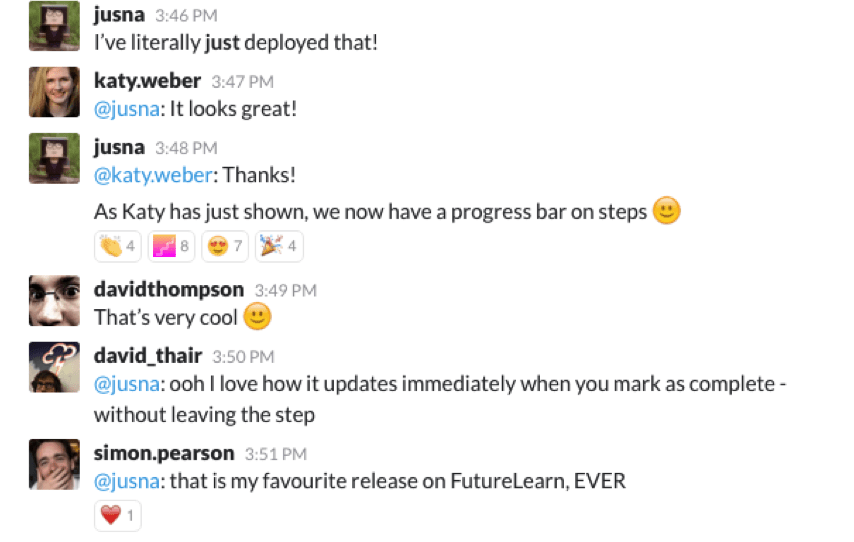 We still have celebrations after our fortnightly Friday meetings. And as our user base continues to grow rapidly I hope we continue to celebrate at every given opportunity. There is always time for celebrating.