FutureLearn has now been based at the British Library for six months. To celebrate, the team share six of their favourite things about it. 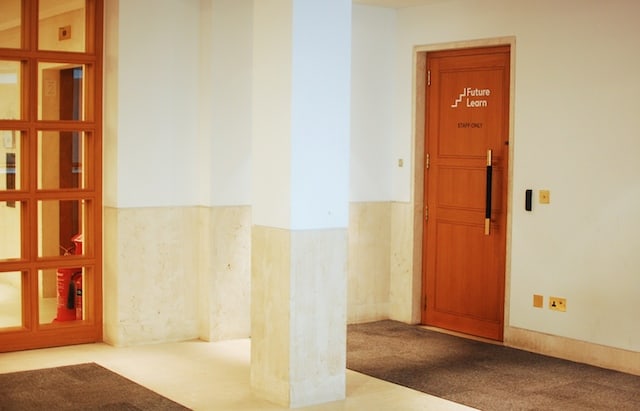 Tucked away next to the Humanities Reading Room in the British Library is an unremarkable door bearing the word ‘FutureLearn’. But once you enter you’ll discover the big, bright space that is the FutureLearn office. It’s like our own secret startup lair!

This week, it’ll be six months since we moved here. I don’t think any of us are tired of walking through those doors each day and being able to work from such an inspiring place. To celebrate, we thought we’d share six of our favourite things about the British Library:

Every corner you turn, there’s another place to learn something new: the entire library filled with books (obviously); the British Library exhibitions and events; and the recently opened Newsroom.

The British Library receives a copy of every publication produced in the UK and Ireland, creating a collection of over a 150 million items. These not only include books, but also newspapers, maps, drawings, music scores and patents. Together, these require almost 625 km of shelves!

For starters, we have the beautiful King’s Library right outside our office. It’s a glass tower within the library building, containing a collection of 65,000 printed volumes assembled by King George III. There’s also the Sir John Ritblat Gallery, which exhibits treasures as diverse as the Magna Carta, the Gutenberg Bible, Shakespeare’s First Folio, and handwritten lyrics by Lennon and McCartney.

Besides the obvious books, there’s so much more art in and around this building: busts of great authors and architects; fascinating sculptures like Bill Woodrow’s ‘Sitting on History’; and even mind-bending 3D artwork like Patrick Hughes’ ‘Paradoxymoron’.

Before we moved into these offices, we were all working from the Open University’s Camden office, with each team spread out over multiple floors. While the design and marketing teams were lucky enough to work on some of the higher floors, the development team were based in the windowless basement, which for obvious reasons got the nickname ‘The Submarine’. It’s a simple thing, but the development team especially are quite thankful for finally being able to work in a place with windows!

The British Library is the largest public building constructed in the UK in the 20th century, and the second largest library in the world (the largest is the Library of Congress in the US). The building was designed specifically with the library in mind by the architect Colin St John Wilson. Although it’s not all visible to the outside eye, the total floor area of the library spans over 112,000 square metres, spread over 14 floors – 9 above ground and 5 below.

We’ve brought the FutureLearn design aesthetic into our offices, as we were keen to create an inspiring and colourful environment in which to work our magic. So from the carpet to the chairs to the columns that run throughout our space, you’ll find our bright, bold colour palette of pinks, yellows and oranges. We’ve even added our product vision to the sides of the columns, to remind ourselves what our principles are and why we do what we do. 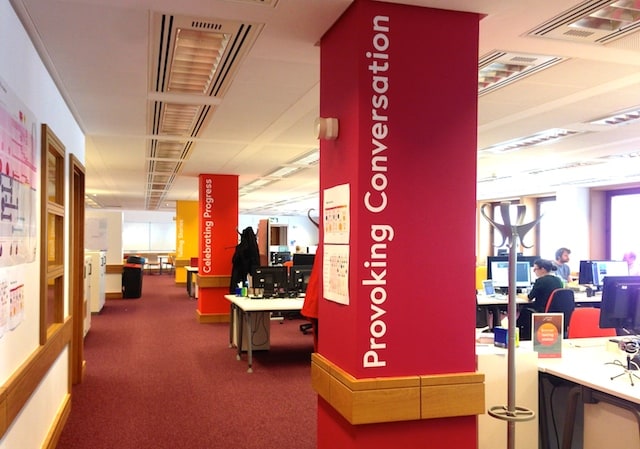 The British Library is obviously a place of learning, with nearly 1.5 million people visiting each year. Although it’s a library, beyond the Reading Rooms you’ll rarely find you get shushed here – the public hallways and common areas are always full of activity and conversations.

This also means it’s a perfect spot for us to do user testing – with so many visitors, we can easily find participants for our sessions. Check out our previous post about guerilla testing for more.

6. We’re surrounded by Kings Cross and London beyond

We’re in the heart of London’s rapidly developing ‘Knowledge Quarter’, with The Francis Crick Institute for medical research being constructed next door; institutions like the Wellcome Trust across the road; and Google moving its European headquarters to a massive new ‘Googleplex’ here in 2016. There’s also Central Saint Martins College of Arts and Design, MacMillian Publishing and the Guardian just up the road.

We love to learn and collaborate, so we’ve begun actively sharing knowledge with our neighbours and others in the London tech scene. We’ve been exchanging notes with the likes of GOV.UK, Poetica and Songkick. Our transport-friendly location also makes it easy for our partners from around the world to easily pop in and visit.

We’re always up for a chat, so if you work for an interesting startup and would like to exchange some tricks and tips – and get a glimpse inside the British Library – do get in touch.

Thinking of specialising as an oncology nurse? Here's everything you need to know to support …

Category: Career, General, Wellbeing, What is

Hoping to land a teaching role? Take a look at the top 10 job interview …