Find out more
Home How bad is the state of deforestation?
Published on December 8th, 2021

Learn all there is to know about deforestation, as we explore the current state of our forests, what the future holds for them and some deforestation solutions. 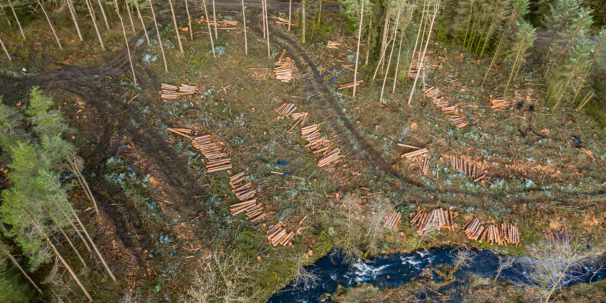 Forests are a marvellous display of nature; these lush environments are home to many amazing creatures and plants, making for some of the most biodiverse locations on Earth. However, due to many man-made threats, these forests are becoming further at risk, and they need our help.

These forests make up 30% of our entire planet, and deforestation is at the top of our ever-growing list of threats to our planet’s survival. Read on to find out what deforestation is exactly, why it is so harmful, the current state of our forests and some deforestation solutions.

Before we explore all there is to know about deforestation, let’s start with a definition. The term deforestation is used to define the removal of forests from land for the purpose of non-forest related activity. Deforestation is essentially any human-driven removal of trees or forest space.

This includes any destruction of trees and forests for human needs and desires. The ecosystems that forests create play a key role in Earth’s survival, so deforestation is incredibly harmful. Forests are one of our most valuable resources on Earth; they provide us with clean air, materials, food and more. Forests even provide natural habitats for a range of animals and help support biodiversity. And yet, we are on track to lose all of our forests due to deforestation levels.

But it’s not too late. We can achieve environmental justice by implementing sustainable practices.. Introducing efforts to counter the negative effects of deforestation could save our forests, and we will explore some deforestation solutions throughout this article.

Unfortunately, many different activities contribute to deforestation, the majority being intentional. Let’s take a look at some of the driving causes of deforestation:

This is the largest cause of deforestation; it makes up for 70% of total deforestation around the world. Agriculture includes any process of cultivating plants or livestock, and a lot of it takes place on forest land. The main offenders of deforestation in the agricultural sector are beef, soy and palm oil.

Many farmers are turning to sustainable agricultural methods to promote a less harmful way of food production. Agriculture and forestry make up 24% of global greenhouse gas emissions, so it’s clear how vital sustainability in agriculture is.

Another factor contributing to the clearing of our forests is urban sprawl – the growth of buildings and developments over large expanses of land. Building precious forest land contributes to many negative environmental factors, and also strips wildlife of their habitats.

With the global population soaring, we are seeing a more and more rapid expansion of urban buildings to house the increasing number of people. As well as having negative effects on our forests, we can expect to see increased pollution and energy use in this space too. We can help reduce the impact of urban sprawl with sustainable construction practices.

Our Governing Urban Adaptation Under Climate Change course offers a great opportunity to learn more about sustainable cities and development.

Although mining may not be the first thought when considering the destruction of forests, it’s a large contributor to deforestation. In order to mine, significant amounts of trees and vegetation must be cleared and burned. As a result, mining is responsible for almost 10% of Amazon deforestation alone. Gold mining, in particular, is common within the Amazon forests, and unfortunately, the effects are long-lasting.

Why is deforestation so harmful?

We already know that deforestation has a huge negative impact on the environment, but let’s look at that a little closer. What exactly are the negative effects of deforestation?

Trees have the capacity to absorb 48 pounds of carbon dioxide each year, making them a huge line of defence against climate change. To find out more about how we can address climate change, check out our Climate Change: Solutions course.

Forests are more than just beautiful and relaxing environments – they are an essential part of keeping the planet alive. One of the effects of deforestation is the reduction of oxygen production. Trees are good at “cleaning” the air by producing oxygen via photosynthesis. Since trees tend to be large, their contribution to oxygen production is significant, and the mass destruction of trees eliminates any oxygen they’d potentially be producing otherwise.

The collective variety of life forms and ecological roles they play is referred to as biological diversity. As we explored in our 6 ways you can prevent extinction blog post, biodiversity is key to keeping our planet alive. Forests provide habitats for over 80% of wildlife on land, and destroying these habitats results in animal endangerment and ultimately extinction.

Forests are home to many different species, all at risk of losing their habitats when faced with deforestation. However, it’s not just the threat of habitat loss that animals face. Deforestation also presents reduced food sources for herbivores, increased contact with humans and increased risk of predation.

How bad is the state of deforestation?

With the current rate of deforestation, we can expect to lose the entirety of the world’s rainforest within the next 100 years. This is a terrifying thought that really showcases the danger of deforestation. We’ve explored the harmful effects of deforestation, so you can see why this would be detrimental to Earth’s survival.

For these animals, it’s not too late for us to step in and help bring them back from endangered status. If you’d like to learn more about how we can protect wildlife, check out our Ecology and Wildlife Conservation course.

As we mentioned briefly, the current rate of deforestation puts us in a position of potentially losing all of our forests. It’s time for change. With how much impact deforestation has on the planet, and the benefits that forests provide, we can see how crucial it is to reduce deforestation.

Deforestation was a hot topic at COP26, and it seems as though the event has had a substantial positive impact on the prospects of our forests. World leaders at COP26 have committed to ending deforestation by the year 2030. The aim is to work collectively to end forest degradation whilst delivering sustainable development.

Additionally, the recent United Nations food systems summit brought discussions regarding food system transformation to the core of biodiversity and climate agendas. With initiatives like these, hopefully we can reverse the harm caused by deforestation, save our wildlife and encourage the positive impact that trees and forests have on the environment.

How to prevent deforestation

As you can see, the current state of our forests is a pressing issue that needs to be addressed. Naturally, we want to do our part and help put a stop to the effects of deforestation. So, what are some deforestation solutions?

Thankfully, trees and forests are incredibly good at restoration and recovering from damage. We can make use of their skill and start rejuvenating forest land in need of attention. There are already many charities and organisations taking part in ‘plant a tree’ initiatives to help boost our forests.

As well as replanting and restoring our forests, we can also make an active effort to preserve ancient forests. Old-growth forests, or ancient forests, are untouched forests that have reached a significant age with minimal disruption. Since they have never been logged, their biodiversity is fully intact, and it’s important to make sure that these important forests remain untouched.

You could help make a difference and encourage sustainable forest practices by being environmentally conscious with your food choices. Making an effort to avoid food with a negative environmental impact could help reduce the 70% of global deforestation resulting from agricultural practices.

Take palm oil, for example – it is a major driver in the agricultural deforestation area. Palm oil can be found in many products you find on supermarket shelves, so a lot of people consume it day-to-day without realising the effects.

Soy is also another large contributor to deforestation – this product is mostly farmed as a means to feed livestock, and the farming of soy is detrimental to the environment. Eating meat has a negative impact on the environment, so eating less, or even no meat at all is a great way to encourage sustainability through your diet.

To learn more about positive changes you could make to your diet, check out our Sustainable Food Teach-Out course.

Another main cause of deforestation is logging, which is the process of cutting down trees for timber. Timber is used for a variety of paper and wood products, which are often recyclable. You can help reduce logging demand by reusing and recycling materials, lessening the need for more materials to be sourced.

As well as lessening the need for logging, recycling also saves energy and reduces any harmful effects on wildlife that waste often causes. As the Christmas period is fast approaching, why not start thinking about some sustainable Christmas gift ideas?

Forests are essential to our planet’s survival and bring a wealth of benefits to humankind. It’s important that we all do our best to prevent any further damage done to their precious biodiversity. Change is needed to divert the current trajectory of deforestation, but we can work together to make that change.

We hope that this article has provided you with a strong understanding of deforestation and its impact on Earth. If you’re passionate about making a difference in this area, check out our Environmental Justice course.