Head of product Matt Walton takes a look at some of the numbers we’ve been seeing from week one of The Secret Power of Brands.

Last week FutureLearn began running its first course: ‘The Secret Power of Brands’ by the University of East Anglia. It was the first time that we’d seen a massive number of people all begin a course together and we’ve been keenly watching the numbers in order to understand how people are using FutureLearn and consider how we can improve it.

It’s early days, but we’re very encouraged by what we’re seeing and we’d like to share a few insights.

Where do our learners come from?

We’ve seen learners from more than 130 countries on this course alone, borne out by the extremely cosmopolitan flavour of the discussions. Whilst the UK represents a large chunk of our audience, we also have a significant number of people learning in India, China, Australia, Russia and the USA, as well as mainland Europe. 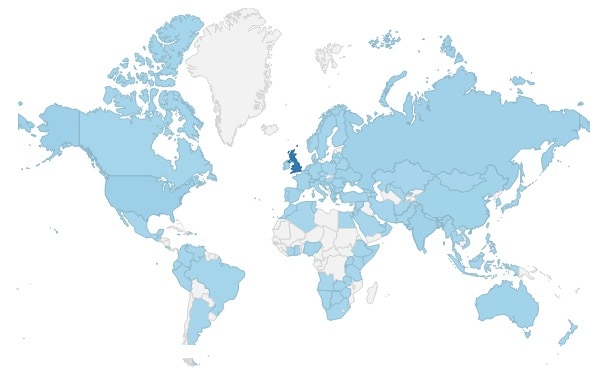 When do they learn?

Because we have learners from all over the world, there is activity across the course throughout the day. In the UK, our biggest market, 7-9pm looks to be the most popular time to learn, although people are visiting steadily through morning, afternoon and evening. Monday was our biggest day, with lots of learners keen to get started. We also saw a little peak on Sunday evening, with people clearly keen to finish the week’s activities.

How often and how long?

We saw people visit 2.5 times on average, suggesting that people work through the course in two or three sessions per week and that they return to see how conversations are progressing – something you can also observe by seeing some familiar faces reappearing in discussions.

The typical length of a visit is around 20 minutes. Bear in mind that this is an average and so some people are probably making shorter visits, whilst others will be spending much longer. We’re particularly pleased with this, as a typical website would be more likely to see an average of something like two or three minutes per visit.

Looking specifically at video steps, the average time on page is consistently significantly higher than the length of the video, which suggests that people watch the video and then spend time reading and joining in with the conversation around it.

Whilst there is a significant number of users who are “just looking” (something we’ve been expecting, particularly on our first courses since we’re new and people want to see what FutureLearn is all about), nearly two thirds of users are actively engaging with content and using the “Mark as complete” button. Typically, a learner is marking three quarters of the steps as complete.

Of the people completing steps, over half of them are also engaging socially, a statistic that we’re also incredibly proud of as conversation is a key part of the learning process, whether you participate or just read others’ comments. The level of social interaction we are seeing isn’t far away from many social networks.

What type of device did they use the site on?

Something else we’re pleased about is that nearly a quarter of our visits are from tablets or smartphones. From the start, we designed FutureLearn so that all features would work elegantly on any device, no matter what size screen, allowing people to learn “anytime and anywhere”. We’re now seeing that this is a reality and that learning is not something that people are doing just at their desk, but also on their sofa and whilst out and about. 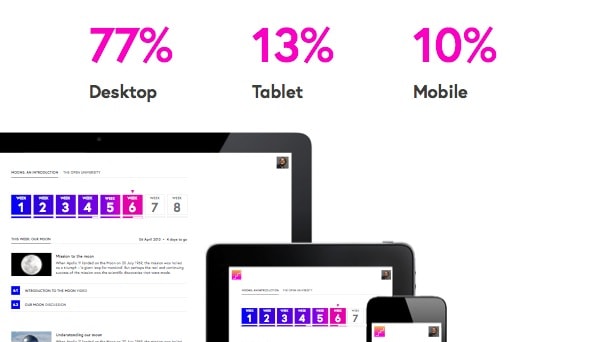 Our initial impression of the first week of ‘Fairness and nature’ by the University of Leeds, our second course which began this week, is that the trends above are being repeated. It’s too early to tell how week two will compare, but we’re pleased that we seem to be on the right track. We’ll share more soon and in the meantime, please keep your feedback coming.