Dr Dominic Bryan, Lead educator of Queen’s University Belfast’s upcoming free online course and Director of the Institute of Irish Studies, discusses why studying the role of crowds and demonstrators continues to fascinate and is the focus of the new course, ‘Identity, conflict and public space: contest and transformation’ on FutureLearn. 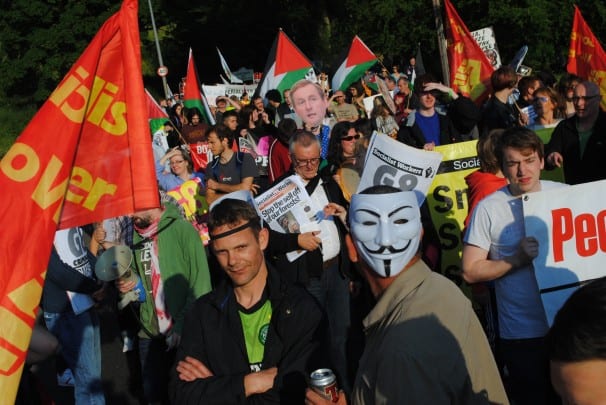 It has been an extraordinary few years for watching the stand-off between people power, in the form of large numbers of people meeting to protest, and the forces of the state. In late 2010 we saw the development of a wave of protests in what became known as the Arab spring. In August 2011 protests in north London became rioting across the city and other parts of England. In September 2011 the Occupy Movement quickly spread from New York to urban centres right around the globe. And in February 2014 Ukraine became increasingly destabilised as the forces of the State struggled to react to different groups supporting either closer ties with Europe or with Russia.

Much has been made of the role of social media in these mass gatherings. But in the haste to view these gatherings as enabled by some new-fangled gadgets we can sometimes forget that the power of large gatherings has been central to politics in the modern era. As ‘publics’ demanded recognition after the demise in the power of monarchies and ruling elites, as cities and transport, particularly in the nineteenth century, enabled large numbers of people to gather in one location, so the potential of people power became clear. Social movements became reflected on the street and those in power – the state, needed to develop laws and policing institutions to control the demonstration.

The new FutureLearn course from Queen’s University ‘Identity, conflict and public space: contest and transformation’ explores the power in a crowd. Why are parades and protests important in global politics? What is it about a crowd that give participants a sense of empowerment, which politicians then long to harness, and the forces of the state fear.  We have seen pictures of police in Kiev, New York, Cairo and London using different levels of force, but have also have seen pictures of them backing away or standing passive in front of people controlling public places.

The difficulty for those protesting and demanding change is that the power of those gatherings is equally problematic for them to harness. Large crowds are almost by definition diverse with a range of different motivation bringing them together. And the emotional potential that appears to be released through participation is likely to drain away when it becomes obvious that the power of the gathering is not sustainable.

In the course ‘Identity, conflict and public space: contest and transformation’ we draw on examples from around the world. But Queen’s University sits in Belfast, a city with 200 years’ experience of attempting to cope with protest and conflict on the streets. Coming to terms with managing public space has been central to the story of our city but also to so many around the world. Long before the Twitter feed, crowds created history.