It is common when working with a large number of dimensions (i.e. many columns in the data) to avoid \(l_p\) dissimilarity measures such as Euclidean distance, and prefer alternatives such as cosine similarity.This is because such dissimilarity measures fail to be discriminative as the number of dimensions increase. To explain things in a very hand-waving fashion, as the number of dimensions increase, points (from finite samples from some distribution) end up getting farther away from each other. The result is that in high dimensions, all points are a long way from all other points, and the difference in distances from a point to other points becomes a less useful way of distinguishing similar from dissimilar pairs. (In the general \(l_p\) case, some researchers who have paid a lot of attention to this phenomenon claim that you can avoid this if you reduce \(p\) fast enough as you increase dimensions, so you end up working with very small, fractional \(p\) values. Most practitioners just use cosine similarity.)If this seems odd to you, don’t worry – it seems odd to everyone. It turns out that our intuitions about distances that we have from visualizing the behaviour of sampling from distributions in one, two or three dimensions simply do not serve us very well in higher dimensions.

Hierarchical clustering algorithms iteratively combine or divide clusters with use of the chosen proximity measure.

Divisive clustering works analagously to agglomerative clustering, but Begins with all data vectors in a single cluster which is then iteratively divided until all vectors belong to their own cluster.Let \(S(C_i)=\{\langle \Gamma, \Delta \rangle : \Gamma \cup \Delta = C_i \land \Gamma \cap \Delta = \emptyset \land \Gamma, \Delta \neq \emptyset\}\). In words, \(S(C_i)\) gives all binary splits of \(C_i\), such that neither resulting subset is empty.Characteristics of both types of hierarchical algorithms are: – A heirarchy of clusterings is returned – The final clustering is not chosen by the algorithm

If we record the proximity values whenever clusters are divided or split in the above hierarchical algorithms, we can form a tree structure known as a dendrogram. A dendrogram gives an overview of the different sets of clusters existing at different levels of proximity. An example is given below.

The above dendrogram has a property called monotonicity, meaning that each cluster is formed at higher dissimilarity level than any of its components. Not all clustering algorithms will produce monotonic dendrograms.

Selecting a clustering from the hierarchy

Since hierarchical clustering algorithms do not provide a single clustering but rather a hierarchy of possible clusterings, a choice is required about which member of the hierarchy should be selected.Visual or analytic analysis of dendrograms can be used to make this decision. In this case, an important concept is the lifetime of the cluster, where this is the difference between the dissimilarity levels at which a cluster is merged with another and the level at which it was formed. We would seek to use the clusters present at a level of dissimilarity such that all clusters existing at that level have long lifetimes.Another option is to measure the self-proximity, \(h\), of clusters, making use of set vs set proximity measures. For example, we might choose to define self-similarity as:\[h(C)=max_{X,Y \in C} \big(d_{l_2} (X,Y)\big)\]Where we remember that \(d_{l_2}\) is Euclidean distance. We would then have to specify some threshold value \(\theta\), for self-similarity such that we take the clustering at level \(L\) in the hierarchy if at level \(L+1\) there exists some cluster, \(C_i\) such that \(h(C_i)>\theta\). In this and the following paragraph we treat the first layer in the hierarchy as the clustering where all vectors are given their own cluster, and the last when all vectors are assigned to the same cluster.A popular choice is to try and read the self-similarity threshold from the data. For example we might choose the largest layer such that the following condition is fulfilled:\[d(C_i,C_j) \geq max\big(h(C_i),h(C_j)\big)\]In words, the last layer where the dissimilarity of each pair of clusters is greater or equal to the self similarity of each of the clusters in the pair. 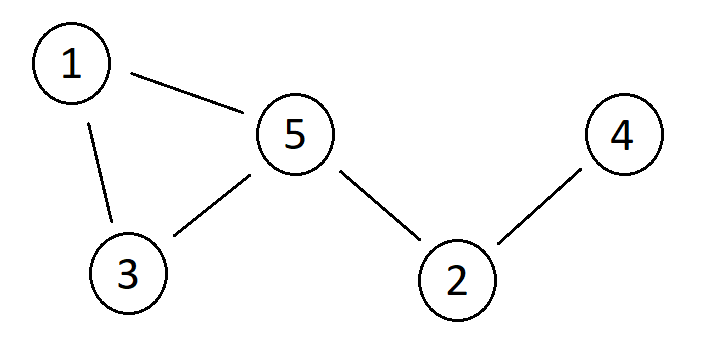 Which can also be represented by the adjacency matrix:\[\begin{bmatrix} 0 & 0 & 1.12 & 0 & 2.73 \\ 0 & 0 & 0 & 2.48 & 2.96 \\ 1.12 & 0 & 0 & 0 & 1.70 \\ 0 & 2.48 & 0 & 0 & 0 \\ 2.73 & 2.96 & 1.70 & 0 & 0 \end{bmatrix}\]A subgraph of a graph \(G=\langle N_G, E_G \rangle\) is another graph, \(S=\langle N_S, E_S \rangle\) such that \(N_S \subseteq N_G\) and \(E_S \subseteq E_G^*\) where \(E_G^*\) are the edges in \(E_G\) such that they connect a pair of nodes both of which are in \(N_S\). In proceeding, we will assume that all subgraphs are such that \(E_S = E_G^*\).A subgraph, \(S=\langle N_S, E_S \rangle\), is maximally connected if all pairs of nodes in \(N_S\) are connected by an edge in \(E_S\).We are now able to explain how basic graph clustering proceeds as extensions of the basic sequential and hierarchical clustering algorithms explained above. We first decide on some property \(f\), of subgraphs (examples will be given below), and use this as an additional constraint in the sequential or hierarchical clustering algorithms.In the sequential algorithm, a datum is added to a cluster so long as the proximity measure satisfies some threshold. In basic sequential graph clustering, we would also check that the cluster resulting from the addition of the new data has a corresponding sub-graph that it is either maximally connected or satisfies some property, \(f\).In the agglomerative hierarchical clustering algorithm, we choose which clusters to merge based on their proximity measures between current clusters. In basic hierarchical graph clustering, we do the same but consider only pairs of clusters such that the cluster resulting from their merger has a corresponding sub-graph that it is either maximally connected or satisfies some property, \(f\).Basic examples of properties of subgraphs that can be included in \(f\) include:Obviously, \(f\) might include logically complex combinations of such properties, such as that a subgraph should have node degree of 4 or edge connectivity of 3.

Optimization-based clustering methods specify a loss function. This loss function will take as arguments the training data and cluster assignment, and the aim will be to find the cluster assignment that minimizes the loss.For example, the clusters may be identified with probability distributions taken to have generated the training data. The loss function is then the negative log likelihood of the training data given the clusters. We minimize this by finding the set of generative probability distributions (their parameter values, and perhaps the number of distributions) that make the data the most likely. Data vectors can be identified as ‘softly’ belonging to particular clusters in the sense of having different probabilities of being generated by the different distributions. We will see how this works in the next few steps.It should be noted that this form of optimization-based clustering is not the only one. As well as thinking of clusters as generative distributions and datum membership of a cluster as the probability it was generated by the particular distribution, other optimization-based methods exist. For example, fuzzy clustering algorithms are typically optimization based.
© Dr Michael Ashcroft