In this article, Dan discusses Henry V’s route through Northern France on his way to meet the French at Agincourt in 1415. 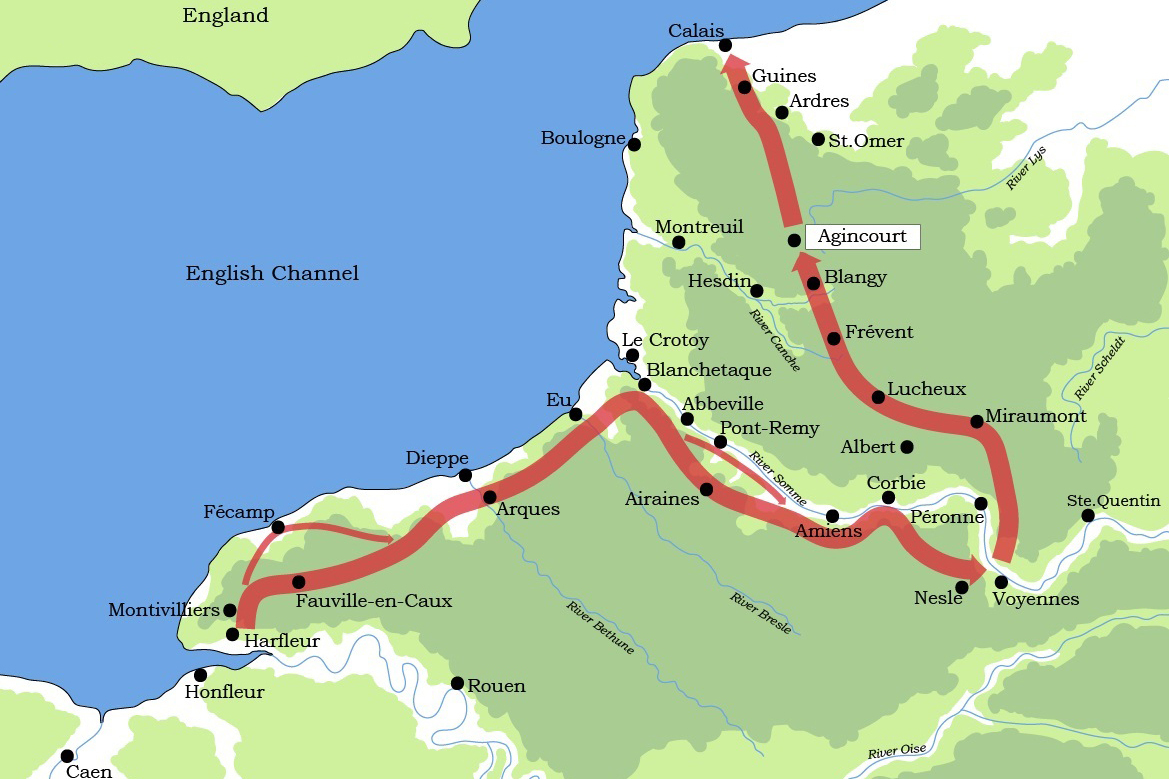 Reasons behind returning to England after Harfleur

According to Tito Livio Frulovisi, the author of the Vita Henrici Quinti (The Life of Henry V) written in the late 1430s, the king’s brother, Thomas, duke of Clarence, argued that it would be to the ‘greater glory of the king’ (translation from Curry, 2009, p.56) that the army should be transported by sea back to England from Harfleur, as the French were gathering in large numbers and their own ranks had been depleted during the siege. Henry was said to have replied that he wished to visit the territories which were his by inheritance as king of France. Furthermore that he trusted in God to protect the army and wished to avoid the claim that he ‘had taken flight on account of my fear and had thus abandoned my right (to the French throne)’ (ibid, p.56). Another consideration, although not mentioned by the chronicles, was the greater availability of shipping at Calais to transport the army back to England.The army left Harfleur on 8 October on its march to Calais, which coincided with the second quarter of service for the army, which started on 6-7 October. Henry may have been mindful of the fact that he had not had enough cash to pay his soldiers for the second quarter but had had to give them jewels as security for future payment. Therefore there was financial sense in cutting the campaign short and returning to England.

The dangers of an overland route

The English intended to reach the safety of Calais as soon as physically possible: the chronicle Gesta Henrici Quinti (translated in Taylor and Roskell [eds] 1975) spoke of an expected eight days but that would need the army to march very quickly. Henry did not aim to make any further conquests. There were risks in an overland route, too and these risks were brought home soon after the army left Harfleur, with the English suffering one death and having three soldiers taken prisoner in a skirmish as they passed the town of Montivilliers. We also know that some of the army fanned out towards Fécamp, and there were further losses there.

By 11 October the main part of the army had reached Arques on the River Béthune, an unwalled settlement but which was overlooked by a castle to the south of the river. The anonymous author of the Gesta states that Henry drew up his forces in battle array before the castle, with the defenders firing their guns in response. There was to be no attack on the town, however, with the inhabitants striking an agreement whereby in return for victuals and free passage across the river, their town would be spared from being sacked. This agreement also had the great advantage the English could cross the River Béthune with ease without being delayed by a potentially costly siege. The English army was obviously too large for any town to offer meaningful resistance and a similar negotiation and agreement was made at the town of Eu on 12 October.On 13 October, the army marched near to Abbeville intending to cross the River Somme at the ford at Blanchetaque. But Henry had been told that a large French army had already gathered on the northern bank. Therefore he did not chance a crossing: taking a large army across a river was always a dangerously exposed manoeuvre. It does seem that some French troops had already managed to get ahead of Henry and had good intelligence of his route.

Searching for a river crossing

Henry and his army were therefore obliged to move inland to search for an undefended crossing point on the Somme. This proved to be difficult as the French were determined to block their passage by destroying bridges and guarding fords. As a result of this, the English were forced to make a significant detour by following the course of the river upstream.

View Course
This delay meant that the army began to run low on food, with their ability to live off the land hindered by the French who deliberately wasted the territory to deny it to the enemy. The army appears to have avoided the city of Amiens by marching southwards to Boves on 16 October (3 miles to the south-east of the city), whose inhabitants negotiated a settlement with the English, which included the provision of food. The following day a skirmish occurred outside the garrisoned town of Corbie, with the English able to drive off the attackers. Following this the English army moved south-eastwards towards Nesle. At this point French forces were concentrating in Péronne.

Intelligence of a possible French attack

The French army had been tracking the English from the north bank of the Somme and were already contemplating battle. According to the Gesta Henry had gleaned something of their plans from prisoners. That had prompted his order near Corbie that all the archers should provide themselves with a stake six-feet-long and sharpened at both ends. They were to plant these stakes in front of them against the cavalry attack which the French were intending to give.In the 1980s Dr Christopher Phillpotts discovered a French plan of battle in the British Library (BL Cotton Caligula D V, folios 43v-44r). The commanders mentioned in it suggest this was a plan for a battle nearer the Somme, not for Agincourt itself. This document states that the French intended to organise their army into two battles of dismounted men-at-arms preceded by companies of gens de trait (crossbowmen and longbowmen). Cavalry were also to be placed on the wings of the battles with the intention of driving off the English archers. We do not know when and how the plan came into an English archival collection but it is interesting to speculate that it had already fallen into English hands during the Somme march and was the stimulus for Henry’s order concerning the stakes.The French tactics at Agincourt followed the same plan of overriding the English archers, but, as we shall see, there were reasons why on that occasion it did not prove effective.On 19 October the English army was finally able to cross the River Somme, most likely near Bethencourt to the south of Péronne. This had needed a diversion of almost 80 miles since the aborted crossing at Blanchetaque. According to the author of the Gesta, Henry had sent out scouts who discovered two narrow causeways by which to make the crossing. The French had broken the causeways in an attempt to prevent the English from using them, but the latter were able to cross in single file to establish a bridgehead on the other side.

Henry then ordered that the causeways should be repaired with materials such as wood and straw. This greatly increased the speed at which the army – still large and with many horses and much equipment – could pass over the Somme, an important consideration as the English were vulnerable as they crossed, but it is still likely to have taken hours.The crossing of the Somme was a significant event as it allowed the English to get back on course towards Calais and meant that the French commanders had less time to gather troops to oppose the invaders. On the following day, on 20 October, French heralds were sent to Henry to inform him that they would offer battle to the English before they could reach Calais.The Burgundian chronicler Enguerrand de Monstrelet also records that a council took place in Rouen on the same day, with Charles VI, the Dauphin and many of the French nobility present, where the decision to confront the English on the battlefield was decided. It is possible that Aubigny-en –Artois was the proposed location of the battle, but that Henry did all he could to avoid moving in that direction. Therefore he ended up being intercepted instead at Agincourt.The English army continued on its march towards Calais, whilst the French continued to mobilise their forces. That there were skirmishes is suggested by the fact that some English soldiers were taken prisoner on 21 and 23 October: this is revealed in the post campaign accounting materials. The English crossed the River Ternoise at Blangy on 24 October.The Gesta then states that as the English ascended the hill on the other side they observed the ‘grim looking’ ranks of the French army (ibid, p.32) further up the valley. Henry therefore drew up his army in battle array, expecting the French would give battle that day. The Gesta and other chronicles place his battle speech and other preparations on that day.However, the French did not show any intention of engaging, because they were still waiting for troops to arrive. Therefore at nightfall Henry stood his army down and went to camp at Maisoncelle. The French camped at Ruisseauville.Between them lay a plain between the villages of Azincourt and Tramecourt. It was there that the battle was to be fought on the following day.

Hi there! We hope you're enjoying our article: Hundred Years’ War: The March Towards Calais
This article is part of our course: Agincourt 1415: Myth and Reality