Skip main navigation
Home / History / Medieval History / Agincourt 1415: Myth and Reality / What Do the Chronicles Tell Us about Agincourt?

What Do the Chronicles Tell Us about Agincourt?

In this article, Dan Spencer reflects on what medieval chronicles tell us about the battle of Agincourt - and why historians treat them with caution. 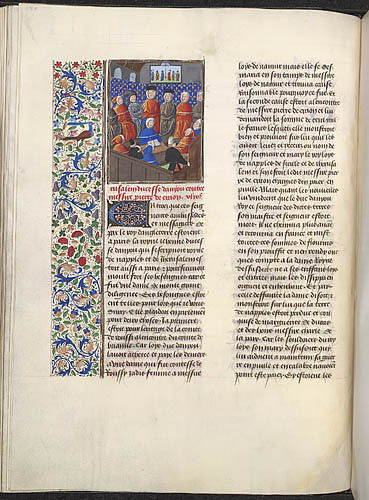 A type of source that we have for the Agincourt campaign is the chronicle, essentially narrative accounts with events in chronological order. There was a long tradition of such history writing in medieval Europe, especially in religious circles since churchmen were the most literate members of society and well read in the bible, classical and earlier medieval works. In the fourteenth century we also see the rise of the vernacular chronicle, most notably the Chroniques of Jean de Froissart, written in French, which celebrated chivalric deeds by recounting them (as well as making a few up!). In the first half of the fifteenth century the first chronicles in English started to appear, such as the ‘Brut’, which traced the origins of England back to its legendary Trojan foundation, and the Chronicles of London which organised the material by the mayoral year, always inserting the name of the mayor and sheriffs. Remember that there was no printing at this point. All of the texts we have were written out by hand. Whilst, for example, the ‘Brut chronicle’ exists in multiple copies, the Gesta Henrici Quinti (deemed the best account of the campaign of 1415) exists only in two copies. In most cases the chronicles were only ever intended to be read by a very small number of people, such as the writer’s monastic community or a noble household. Most writers were also wholly dependent upon second hand information. A good example is Thomas Walsingham, a monk at the Benedictine monastery of St Albans. He wrote various chronicles, continuing the tradition of his religious house for historical writing, but for the war in France he was dependent upon the information he picked up from visitors to the monastery and stories circulating.

Agincourt in the chronicles

The battle of Agincourt was an important event in English, French and European history which meant that it is discussed in many chronicle accounts written within 50 years of the event. These differ on national lines. In brief, English chronicles focus on the amazing nature of the victory and God’s support for the English whereas French and Burgundian chronicles, such as the Histoire de Charles VI (c.1415-22) written by a monk at St Denis (which had a tradition of historical writing like St Albans) and the Chronique d’Enguerran de Monstrelet (1447), written by a Picard author, seek to apportion blame for the defeat. We also need to be aware of when the text was written. Walsingham and the Monk (or Religieux) of St Denis were writing quite close to the event but Monstrelet’s chronicle dates to the 1440s as a continuation of Froissart’s Chroniques. Hindsight, especially Henry V’s acceptance as heir and regent of France in the treaty of Troyes of 1420, affected the way French writers wrote about Agincourt.

‘During this great assault the most serene brother of the king, Humphrey duke of Gloucester fought bravely and without caution. Having been pierced by the point of a sword, he was thrown to the ground half dead. His brother the king himself put his feet astride the legs of Humphrey. For the renowned duke fell with his head against the king’s feet but with his feet to the enemy. In this position the king fought most courageously for a long time so that his brother might be carried safely away from the enemy to his own men.’ (Curry, 2009, p. 69).

‘Also the noble duke of Gloucester, the King’s brother, pushing forward perhaps too vigorously on his horse into the conflict, was grievously wounded and cast down to the earth by the blows of the French; for whose protection the King being determined, bravely leapt against the enemy, defended him with his own body, and snatched and guarded him from the enemy, sustaining dangers scarcely possible to be borne.’ (Ibid, p.73)

Take note of how both these accounts expand on the narrative provided in the Gesta Henrici Quinti, the account of the campaign written in 1417 by an anonymous priest who was actually present on the campaign:

‘And our duke of Gloucester, Humphrey, the king’s youngest brother, a brave prince, like as he gave, in part received. Fighting in the king’s `battle’, he was seriously wounded. And no wonder among so many furiously wielded swords, spears, and axes! After his arrival at Calais, however he soon recovered, God be praised.’ (ibid, p.39)

This is an eyewitness account but we can see that the story was circulating in England soon after the battle, since it is also found in the Liber Metricus of 1418, written by Thomas Elmham, a monk of St Augustine’s Canterbury. Interestingly, Henry V stayed at his abbey en route from Dover to London in November 1415 after the campaign.

‘The brother of the king, the noble Duke Humphrey, was wounded in the groin. Gore flowed down from the sword. Having fallen to the ground, the king stood over him to assist him. He was in this battle the defender of his brother.’ (ibid, p.49)

Historians use chronicles with caution

View Course
Chronicle accounts of the battle of Agincourt are fascinating but we need to use them with caution. They often provide differing accounts of the same event, and that presents considerable challenges for the historian. It is tempting just to heap up their narratives together but when they give differing versions, we have a problem. Also chroniclers had little idea of the reality of numbers but tended to use figures for effect. Many different figures are given, for instance, for army sizes, French dead and prisoners, some of which are totally unrealistic. In general English sources tend to ascribe larger numbers to the French than do French writers. Two French chroniclers even say the French army was smaller than the English army. The advantages and disadvantages of using this type of source can be illustrated by examining the surviving accounts from the period, where the writer claims that they were present at the battle, which each provide evidence of varying interest and quality.

The anonymous author of the Gesta Henrici Quinti (1417) appears to have been a member of a priestly order attached to the royal household. His main purpose in writing the chronicle, which runs from Henry V’s coronation on 9 April until November 1416, was to glorify the king as a devout Christian prince blessed by the approval of God. The author took part in the expedition and so provides a comprehensive account of the campaign up until the day of the battle. He states he was at present at the battlefield but was confined to the rear of the English army as he ‘…was then sitting on a horse among the baggage at the rear of the battle’ (ibid, p.35). Therefore, despite being at Agincourt, he was undoubtedly reliant on the second-hand accounts of other participants in the engagement. Also the narrative actually includes a great deal of religious invocation which is not surprising given the priestly origins of the author and his purpose. This often overwhelms the military detail. You can get a flavour of this by looking at a translation into English from Latin of the Gesta’s narrative of the battle.

Another apparent eye witness account of the battle is provided by John Hardyng’s Chronicle (first version 1457 and second version 1464). Hardyng was born in the north of England, possibly Northumberland, in 1378. By his own testimony, he claimed to have served with Sir Robert Umfraville on the 1415 campaign to France. Yet no evidence has been found for his participation in the expedition from the surviving muster rolls, and he only mentions his presence in the second version of his chronicle. It is questionable therefore whether he actually served on the campaign at all. Furthermore both versions were written up more than thirty years after the battle, about which they have very little to say.

Two further accounts are provided by writers from Picardy, Jean Waurin and Jean Le Fèvre (1444-1460s). According to Waurin he was fifteen at the time of the battle with the French army, whereas Fèvre was nineteen and with the English army. It appears that Le Fèvre was in the service of the heralds, whilst it is unclear whether Waurin was a combatant or not. Both men, however, wrote their chronicles at least thirty years after the battle, and drew heavily upon the work of another chronicler, Enguerran de Monstrelet, whose work was finished in 1447. This problem of borrowing, together with the desire of the authors to present a pro-Burgundian account of events, means that their testimony also needs to be treated with care. But they provide the best account in terms of military content.

Another problem is how historians of the sixteenth century, especially Edward Hall and Raphael Holinshed, used such medieval chronicles as they could access in order to write their histories. Holinshed’s work of 1577 and 1587 was used by Shakespeare. But both Hall and Holinshed gave their work a sixteenth-century flavour and we should always go back to the chronicles of the period rather than relying on these later works.

Curry, A. The Battle of Agincourt: Sources and Interpretations (Woodbridge: The Boydell Press, 2009). This book includes translations of all the key documents relating to the Agincourt campaign.The link takes you to Amazon.co.uk [accessed 16 October 2015]. Taylor, F. and Roskell, J. S. (eds.), Gesta Henrici Quinti: The Deeds of Henry the Fifth (Oxford: Clarendon Press, 1975)
© University of Southampton 2015