Let’s talk about one real-life example of using the tree method. How can we use tree methods to classify the houses? 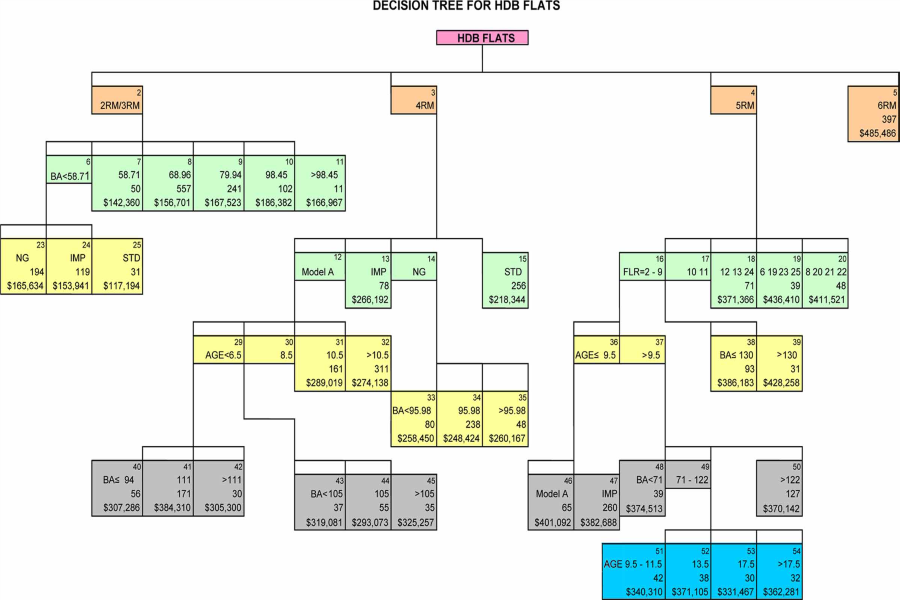 Let’s talk about one real-life example of using the tree method. How can we use tree methods to classify the houses?

The figure above is the decision tree results for Housing Development Board (HDB) in Singapore. We will go over this application one by one together to extract some meaningful interpretations!

This project was to aid the flat purchase. We have the data regarding flats registered with the Housing Development Board (HDB) in Singapore. Our goal of this analysis is to decide which flat is the best to buy.

We start the flats split by the number of rooms – 2RM/3RM, 4RM, 5RM, and 6RM. In the figure, orange colors indicate the first split. According to this decision tree, your decision should start with how many rooms you would like to have.

But aren’t you curious about how we decided to start from the number of rooms? To build the decision tree algorithm and get the final result, we will try many different ways of splits and find how we finally have the purest leaves in the end! The computer will do all this hard work by doing many trial and error.

Now, let’s look at the second split that the algorithm concluded from many trials and errors. Light green indicates those.

Turn your attention to the center four boxes colored in light green. It is the second split for the subgroup of 4RM. This second split used model types. Model A, New generation (NG), improved (IMP), and standard (STD) are all model types of the flat.

The last five light green boxes on the right are the second split for the 5RM group. The second split used the flat location in terms of floor. For instance, FLR=2-9 means the flat is between the second and the ninth floor.

We can continue this kind of splits using different attributes and build the entire tree. The table below summarizes the final classification tree, and the attribute used to split in each level. Note that the attributes are all different according to the subgroup.