Eczema belong to the most common diseases in dermatology. From a pathophysiological point of view, an eczema is a non-infectious, cell-mediated inflammation of the superficial skin layers. It may develop spontaneously, however, often exogenous triggers are important. We distinguish three common subtypes: allergic or irritant contact eczema and atopic dermatitis. The two subtypes of contact eczema may differ in their appearance, localisation and in their mechanisms and causes. 75 to 80% of cases are caused by irritants, 20 to 25% by contact allergens.

Allergic dermatitis or eczema is triggered by contact allergens. Contact allergens are typically small molecules with a low molecular weight, so-called haptens. The immunological mechanism behind allergic contact dermatitis corresponds to a delayed type (or type IV according to Coombs and Gell) hypersensitivity reaction. 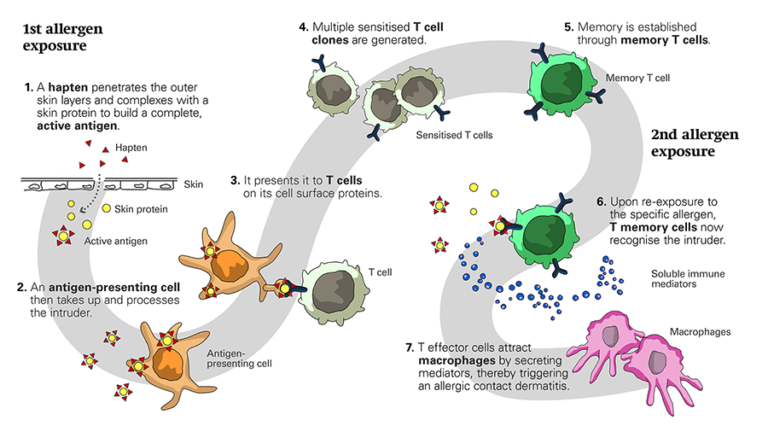 As in immediate type allergic reactions, at a first allergen exposure the body may become sensitized.

Only at an ongoing or subsequent exposure to the same allergen, allergic symptoms occur.

Some haptens (eg as nickel) may directly bind to the MHC molecules of APCs and thereby easily induce sensitization. Some fragrances (eg limonene) are so-called prehaptens, which spontaneously turn into allergenic molecules if exposed to oxygen. Finally, prohaptens (eg para-phenylenediamine) are substances that are metabolized into the allergenic compound within the patient’s skin.

In irritant (non-allergic) contact dermatitis, the skin barrier is primarily disturbed, resulting in inflammation mediated by innate immune mechanisms. Common irritants include water, soaps, detergents, cold temperature, mild acids and alkali, as well as ultraviolet radiation. At the affected site, the skin burns, turns red, dry, and finally scales; painful fissures and crevasses may arise. It is mainly confined to the site of exposure to the irritants.

Atopic dermatitis, on the other hand, has a strong genetic background and typically occurs for the first time during early childhood. It may be triggered by irritants, food allergens, and microbial antigens. Indeed, due to an impaired skin barrier, patients with atopic dermatitis are more sensitive to irritants (eg frequent washing, soap use, and cold dry weather). In some patients with atopic dermatitis, the skin condition may be aggravated by food allergens. Bacterial or fungal overgrowth may trigger inflammation and complicate the skin condition through additional infections. Finally, the frequent use of topical medications and care products may result in sensitization to some of its components. An allergic contact dermatitis may be superimposed onto the atopic dermatitis, further aggravating the skin inflammation.