In step 1.5 we looked at wound healing mechanisms, this step focuses on the theory behind what we can do to enhance and speed up this process. Professor Finn Gottrup shares some interesting examples of effective wound management below.

Higher levels of oxygen in the air have been linked to increased collagen production – oxygen plays an important role in wound healing and prevention of infection. We will now look at a couple of studies which investigate this link.

Bacteria was injected into the skin of dogs and the formation of abscesses was observed. It was found that as the concentration of oxygen in the air was increased, the size of the abscess would decrease (and almost no abscess would be formed at 45% oxygen).

This experiment compared the effects of antibiotics to oxygen treatment. E. coli was injected into guinea pigs, and they were placed in varied situations (outlined in the table below). Guinea pigs placed in a low oxygen concentration (12%) would have a larger area of necrosis. Necrosis decreased slightly with administration of an antibiotic. The highest success was observed in guinea pigs placed in high oxygen concentrations who were also given an antibiotic: producing very low or no necrosis at all. 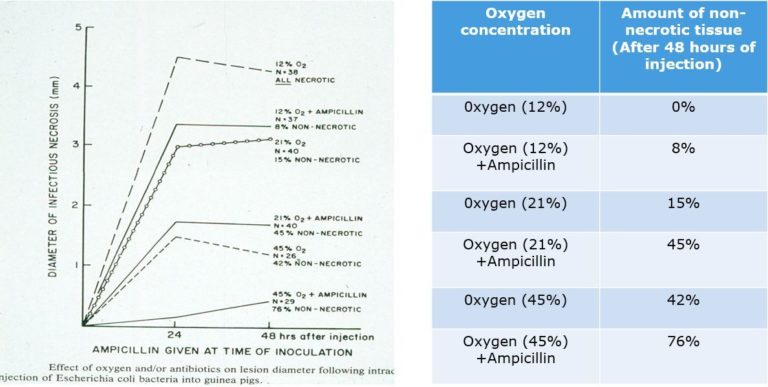 Systemically applied normobaric oxygen is a clinical method of oxygen treatment. It can involve the use of a Hudson mask (an example is shown in the image below). Subcutaneous tissue oxygen tension is a powerful predictor of wound infection. The graph below summarises the results of an experiment comparing the rate of infection versus level of oxygen administered post-operatively. Overall it can be seen that almost half of the patients were infected when lower levels of oxygen were administered, and infection occurred much less frequently as levels of oxygen perfusion increased.

A second clinical study investigated 500 patients undergoing colorectal resection. They were divided into two groups to receive either 30% (Group A) or 80% (Group B) inspired oxygen during the operation and for two hours after. The arterial and subcutaneous partial pressure of oxygen was significantly higher in group B. The rate of wound infection was found to be 11% in group A and 5% in group B, suggesting that perioperative administration of supplementary oxygen is a practical method of reducing the incidence of wound infections.

There has been an ongoing debate of the advantages and disadvantages of providing supplemental perioperative oxygen.

Some papers do not make it clear if they support either side, such as High Inspired Oxygen Fraction and Surgical Site Infection. Read the articles and tell us what you think. The links are also provided in the see also section below.

Hyperbaric oxygen therapy is the use of oxygen at an ambient pressure higher than atmospheric pressure. Oxygen at high pressure can enhance tissue function and fight infection under certain conditions.

By using hyperbaric oxygen therapy, you increase the diffusion radius of oxygen into the tissue by a factor of 2-4. This means a higher volume of oxygen can enter the tissue, which as described leads to more effective wound healing and infection prevention.

Have you used oxygen treatment in your clinical practice? Share your experiences and thoughts on the technique in the comments section below.