Antimicrobial therapy and its development over the years.
View transcript
9.4
Hello. My name is Rose Cooper, and I will be introducing you to antimicrobial stewardship and explain the rationale for it in wound management. I will do this by dividing the topic into four parts– the development of antimicrobial therapy, what is antimicrobial resistance, the scale of the problem of antimicrobial resistance. And lastly, we’ll look at, what can be done? In other words, we’ll introduce you to antimicrobial stewardship. We’ll begin by learning about the development of antimicrobial therapy. Initially, ancient civilizations would have relied on local materials, but would not have understood the causes of infections.
57.7
They would probably have tried out various combinations of locally-available materials, continued using what worked, and discarding what was ineffective. Broadly, these materials are classified– as shown in the slide– to animal, vegetable, and mineral. Of course, we can’t be too sure about the recipes they used because very little documentation survives from ancient civilizations. During the 19th century, development of the chemical industry provided a wide range of agents that could be used in clinical practice. Some of these were disinfectants that were used at relatively high concentration on inert surfaces. Some were used in a more dilute form and hence, could be used as antiseptics on human tissue. There are several landmarks in the control of wound infection.
117.5
In the late 19th century, Ignaz Semmelweis, who worked in a hospital in Vienna, first used chlorinated water and then chlorinated lime to persuade doctors to wash their hands between examining patients in obstetric wards. And he was successfully able to reduce mortality rates from puerperal fever, otherwise known as child bed fever.
145.7
Another disinfectant or antiseptic that was used on human tissue was introduced by Lister. He soaked dressings in carbolic acid, and applied them to compound fractures. He continued this practice, which eventually led to the development of antiseptic surgery, where he used carbolic acid to clean the surgical instruments. And sprayed it into the hospital operating theatre to reduce infection.
175.9
All of these developments were not fully understood until Robert Koch introduced the germ theory of disease in 1876. This made it clear that the causative agents of infections were microbes. It was then possible to think of selective methods to kill those pathogens. Considering the limitations of antiseptics, it was understood that they were broad spectrum agents, often oxidising or denaturing in nature. Hence, they would cause an adverse effect on human tissue, in addition to killing pathogens. During World War I, Alexander Fleming documented some of the limitations of antiseptics in treating military wounds. Using Cressy’s hole experiment, he compared the activity of various antiseptics, and showed that they were inactivated relatively quickly by body fluids. And that they impaired leukocyte activity.
246
The painful nature of iodine had been known since its introduction into clinical practice during the American Civil War. More recently, the possibility of allergic reactions of some antiseptics has been noted.
263.4
The use of antiseptics started to diminish after the publication of two important studies in 1985. Considering the mode of action of antiseptics using two animal models, which clearly showed that they coagulated human proteins. That convinced many people to stop using antiseptics directly on wounds. In the early 20th century, Paul Ehrlich established a principle of antimicrobial chemotherapy by using dyes to selectively stain protozoa and not human tissue.
303.6
With this differential effect, he realised that you could attach an inhibitor to a dye and could get it directly to the site of the infection to kill the pathogen directly. This approach was known as magic bullets, and the idea was to selectively kill the pathogens, and not affect the host. He developed Salvarsan, which was used in the treatment of syphilis– one of the leading causes of morbidity and mortality at that time. The discovery of penicillin was a major step forward. It took some time to produce it on a large scale and to use it in clinical practice. But it had a significant impact in treating wounds. And thereafter, we’ve had a period of 70 years where its been used successfully.
353.3
And a whole range of antibiotics have been discovered. Since the Second World War, there are some other topical agents that have been introduced into clinical practice. Iodine has been modified to a slower release form, thus being less painful in its delivery. Some newer agents like octenidine and PHMB have been introduced as well. And some ancient remedies like silver and honey have been reintroduced into clinical practice. The most recent class of a new product is one that relies on producing reactive oxygen species using an enzyme system. Today, we have a wide range of antimicrobial agents that are important in wound care.
403.1
But we need antibiotics that not only treat wound infections, but also to prevent infection and to decolonise multi drug-resistant strains. We have a range of antiseptics or biocides and their uses are illustrated in this slide.

Antimicrobial agents have been in use for a long time. Ancient civilisations used agents such as honey and herbs, which were naturally available and proven to have strongly beneficial effects.

The late 1800s was an era of discoveries which established the association between disease and species of bacteria. This encouraged experimentation with possible treatments, especially with a sudden increase in cases of syphilis and gonorrhoea.

• Robert Koch used experiments to prove that the bacterium Bacillus anthracis was the cause of anthrax.

• Joseph Lister played a significant role in preventing surgical infections by using carbolic acid. He used this to prevent wound infection for a patient with a compound fracture of the leg.

• Paul Ehrlich discovered Salvarsan, an arsenic-based chemical which proved to be an effective treatment against syphilis.

• Alexander Fleming is credited with the discovery of the first antibiotic, Penicillin. This saved many lives during the second World War and paved the way for discovery of other antibiotics. 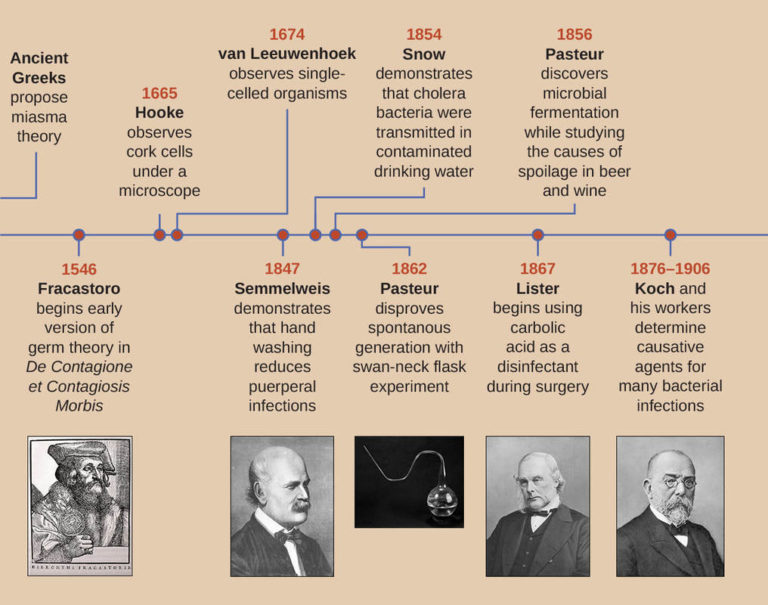 After watching the video, reflect on the following:

Please share your thoughts in the comments section and explain your reasoning.