Watch Paula Marti from DEIMOS, explain how satellite data can be brought together and automatically processed for projects.
View transcript
8.4
My name is Paula Marti. I work for Deimos Space UK. We’re a space company and we work on the different stages of our satellite mission. In particular, my group is the Earth Observation group. We do analysis of satellite data. Satellite data is very difficult to find, download, process. However, us and other commercial companies are trying to make this process easier for the average user so the data is ready to be used for applications. Our latest project is called SAFIY. It’s about trying to locate and count palm trees in Dubai, Abu Dhabi, and some other areas of the country. How much water they need, how much taxes do they want to charge, or how many data we’re going to produce.
54.6
So satellite data is perfect. We can acquire big areas at once. And that also allows for monitoring. So you can do it many times through the year. So we’re using techniques that are using robotics or in self-driving cars that allows finding objects in images. We need training data that are at the moment images and that they are already labelled with what we know is in the image. So we feed this to the algorithm. It takes hours, days. We can pass new images that is never seen before. And it should be able to pick up objects that are known to it. The data sets that we use are really big.
89.6
So they are images, but they are not just the three colour RGB images. They can have up to 12 different colours. And the latest data that we use is WorldView-3 . A 30-centimetre resolution means the smallest object that we can see is 30 centimetre. So one image can be about 100 gig or more. It’s very interesting that we’ve learned through this project that it’s not viable anymore to do computation locally. What we have to do is work in the cloud. So the images are not anymore downloaded to your computer to do the analysis. You have to concentrate on your algorithms working well, your data being of a good quality, and your outputs as well.
129.5
For all this infrastructure, now we don’t have to worry anymore. We can just hire it.

The Earth Observation Applications department in Deimos Space UK develops systems and algorithms that derive information from satellite imagery. Watch Paula Marti explain how satellite data can be brought together and automatically processed to meet the needs of a customer using the example of SAFIY. There are many satellites providing data at different spatial and temporal resolution in different spectral bands (eg red, green, blue, near infra red). Satellite imagery analysis techniques can extract information from the data that cannot be necessarily seen by the naked eye, such as vegetation health or soil moisture content. In other scenarios, the information in the image can be easily interpreted by a human (eg finding buildings) but automation is needed in order to cover large areas (eg find all buildings in a city). Automated techniques tend to use powerful algorithms that are often derived from the robotics and computer vision sectors, and are also being used in new developments such as self-driving cars.One example of a Deimos project that creates information from satellite data is SAFIY. The aim of the project was to automate the production of geospatial information based on satellite data, to aid the planning and monitoring of urban change in support of UAE Government initiatives such as Smart Dubai. It also aimed to establish a strategy to facilitate data sharing primarily amongst government departments. Deimos Space UK worked together with Ordnance Survey International and in partnership with Mohammed Bin Rashid Space Centre (MBRSC). 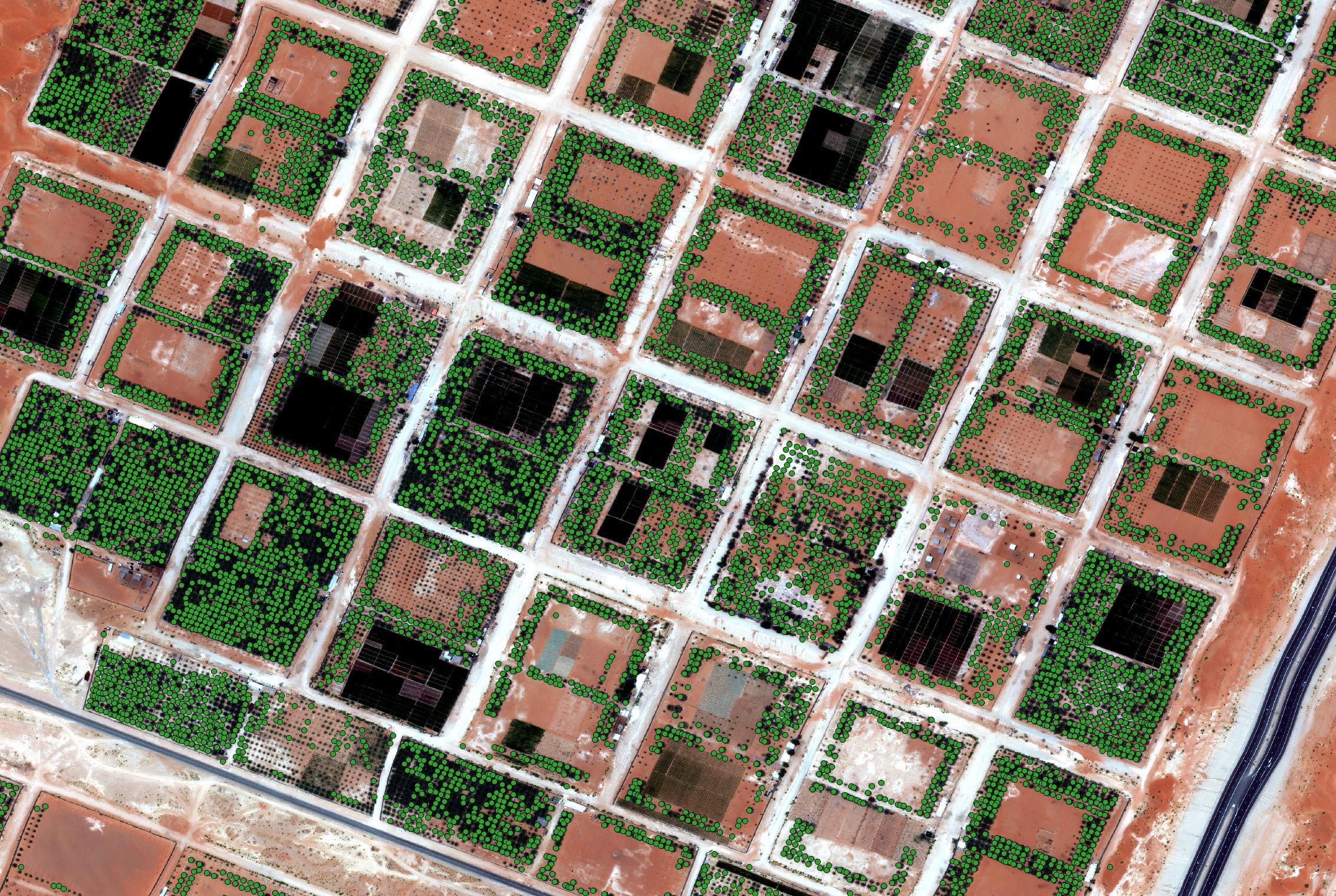 During the first phase of the project, SAFIY automated the extraction of features such as roads, water, vegetation and buildings from 1-metre resolution Earth Observation data acquired by the Dubaisat-2 and Deimos-2 satellites. During the second phase of the project, the focus was on monitoring vegetation, in particular mangrove forest and palm trees. In order to count individual palm trees higher resolution data at 30cm from WorldView-3 was used.Satellite imagery can cover large areas and also contain data in many spectral bands. This means these data files are big, ranging from a few gigabytes each to more than 100GB. Large amounts of computer storage are required, together with memory and processing power capable of running the algorithms and capacity to move or download large images for processing. The most effective way of working with this volume of data is to use cloud computing resources. This gives access to configurable resources which can be rapidly provisioned over the Internet.

Hi there! We hope you're enjoying our article: Spotting palm trees from space
This article is part of our course: Big Data and the Environment