Find out more
Home / Healthcare & Medicine / Genetics / Why Biology Matters: The Genome and You / Genome, determinism and future: further material

his activity deals with three extremely interesting concepts with plenty of implications of strong social concern.

All three are research fields in their own right, and several popular science books have been written about each of them. They are: free will and determinism; the biological effects of culture; and the genetic future of humankind. They are not part of ‘hard’ science as many of the other chapters are, but are related to the social sciences and humanities. In fact, the most interesting input on many of these topics comes from scholars of philosophy and anthropology.

This course has taken a fully materialistic view of the world, subject to the enormous complexity of the molecular mechanisms that are the basis for life and, thus, brain functions. This view entails a physical determinism, in which all components obey the laws of physics and have functions that are the output of very complex networks of molecular interactions. We could say that a materialistic view is a deterministic view, albeit, in most cases, an unpredictable one. This unpredictability could simply be due to the existence of noise in the molecular interactions of the molecular elements; when there is a large number of them, unpredictability is the rule. In this vision, free will can exist: even if each part is material and deterministic, the overall result of complex interactions is extremely (although not entirely, of course) open. This view is called compatibilism.: 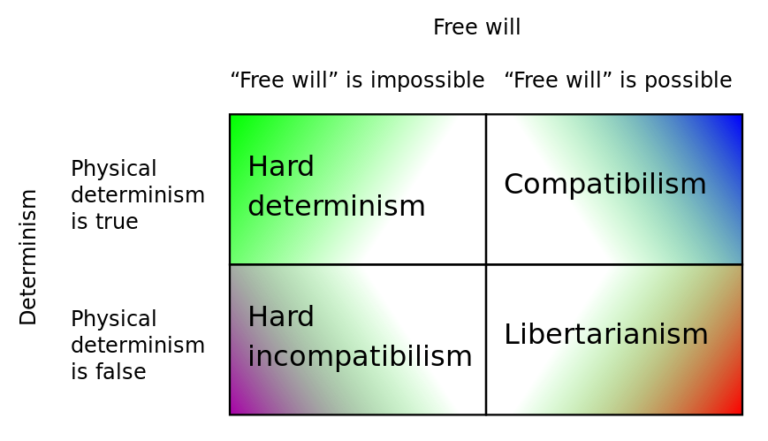 The second concept is the biological effect of culture. Again, this is a broad field that falls within the co-evolution concept in which the product of evolution impacts evolution itself. There are many illustrative examples and extensive research on how biology and culture influence each other.

The final concept is the genetic future of humankind. Here the word ‘genetic’ means that we are not talking about the general future of our species, but potential future changes in our genomes and, thus, our biology.

In this chapter, we will talk with a fantastic scholar, Daniel Dennett, one of the most important living philosophers. He is best known for his argument that human consciousness and free will are the result of physical processes in the brain. Some people consider these ideas provocative and controversial, but in biology they are mainstream, the common point from which science (mainly neuroscience) begins. Any of his books or articles would be excellent supplementary reading, including his most recent book, From Bacteria to Bach and Back: The Evolution of Minds.

The 27 March 2017 issue of The New Yorker included an interesting article offering an introduction to his thought by Joshua Rothman, called “Daniel Dennett, Science of the Soul: A philosopher’s lifelong quest to understand the making of the mind” by Joshua Rothman.

Again, we recommend watching Daniel Dennett’s videos. You can find many on YouTube, of varying lengths. One short and interesting interesting one is this video.