Why business continuity and crisis management?

This article describes why it is important to have a business continuity or crisis management strategy.
© Coventry University. CC BY-NC 4.0
We are now going to look at why we have Business Continuity Management (BCM) and Crisis Management (CM) and their roles in mitigating threats and hazards to organisations and the communities in which they operate.

Potential threats to organisations are often monitored and identified by a process called ‘horizon scanning’. Once successfully identified, an organisation has the ability to select threats that require more detailed planning to mitigate risk.The Business Continuity Institute (BCI), in conjunction with the British Standards Institute (BSI), has compiled a ‘horizon scanning report’ which shows the perceived threats that organisations may face in 2019.The top ten threats identified are:Some threats are more common, while others are dependent on factors such as geography, social conditions and industry sector.One example of supply chain disruption could be caused by industrial action, for example British Airways in 2018. Action by the staff of one of its suppliers and resultant industrial action by their own employees led to hundreds of flights being cancelled, 100,000s of stranded passengers and an estimated cost of £40m to the airline.This shows the relationship between threat and consequence as we will now consider.

View Course
Larger organisations may be able to cope with such costly events but according to the US Federal Emergency Management Agency, 40% of small businesses never reopen their doors following a disaster such as flooding.Consequences of not having a BCM plan may include:Research conducted by Knight and Pretty (1997) demonstrates the impact of catastrophes on shareholder value. Taken from this paper, the graph below indicates that organisations can recover their shareholder value after a disruption or crisis. 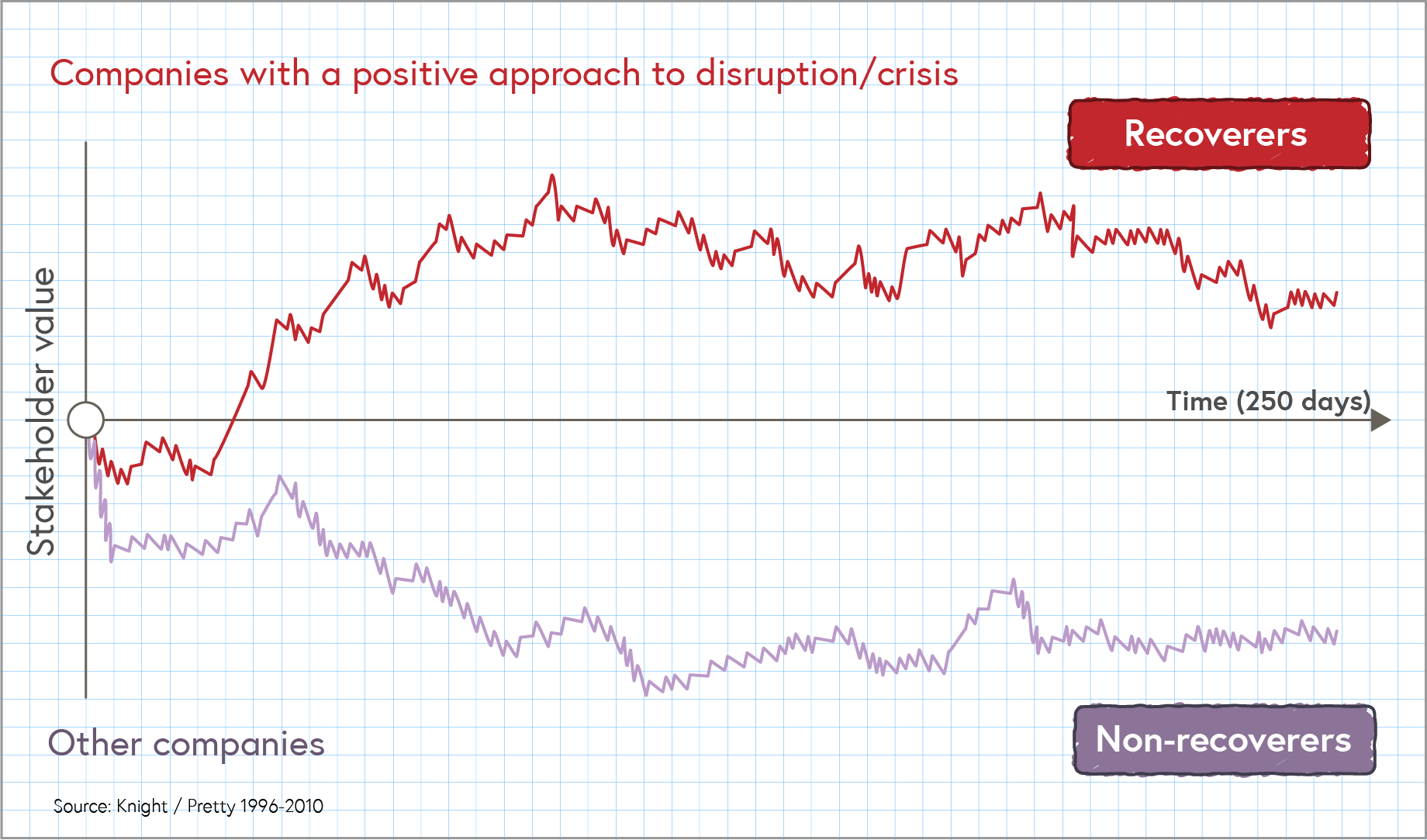 Initially all organisations in Knight and Pretty’s research lost share value, but some recovered and thrived, while others never recovered their pre-incident share price over a 250-day period.Note here that recovery can also mean saying and doing the right thing at the right time via an effective crisis management communications structure.

The benefits of BCM

The importance of business continuity management is successfully illustrated in the following statement by Eliza Manningham-Buller (former director general of MI5) in her address to the Confederation of British Industry (CBI):

‘I am often asked what single piece of advice I recommend that would be the most helpful to the business community. My answer is a simple but effective Business Continuity Plan that is regularly reviewed and exercised.’
(Manningham-Buller 2010)

Aside from meeting regulatory and legal requirements, by having BCM and CM in place, organisations benefit by:
As a way of highlighting the potential benefits of implementing BCM and CM strategies, when the World Trade Centre in Manhattan was bombed in 1993, 150 out of 350 organisations went out of business.
Conversely, in 2001 when the disastrous 9/11 attacks occurred, many organisations who had robust and tested plans were operational within an acceptable time-scale.
Later, in 2012 when Hurricane Sandy flooded Lower Manhattan, organisations were forced to suspend operations due to power loss and flooding, but many firms had plans for alternative operations outside of the affected area.
Essentially, organisations have BCM and CM in place in order to prepare for and respond to disruptive events which directly or indirectly affect the organisation. By having them in place they can manage the operational elements that allow them to function normally and maintain revenue generation/service provision.

Look again at the graph that we have provided from the study carried out by Knight and Pretty.
What do you think this shows about the effectiveness of response in the short, medium and long term?

Hi there! We hope you're enjoying our article: Why business continuity and crisis management?
This article is part of our course: Business Continuity Management and Crisis Management: An Introduction