Workplace bullying takes on many forms.

Just as the Saks scandal dominated the fashion industry news in 2005 and 2006, three other topics continue to be at the forefront today: workplace bullying, sexual harassment, and for those in the fashion advertising and promotion segments, appearance/weight issues.

Issues in the workplace: Bullying

Although most of us may think of bullying as something that was left in the school playground, it is actually quite common in today’s workplace. According to the Workplace Bullying Institute website, bullying is abusive conduct that involves “threatening, humiliating, or intimidating, or work interference—sabotage—which prevents work from getting done or verbal abuse,” the latter of which is depicted in the following picture. 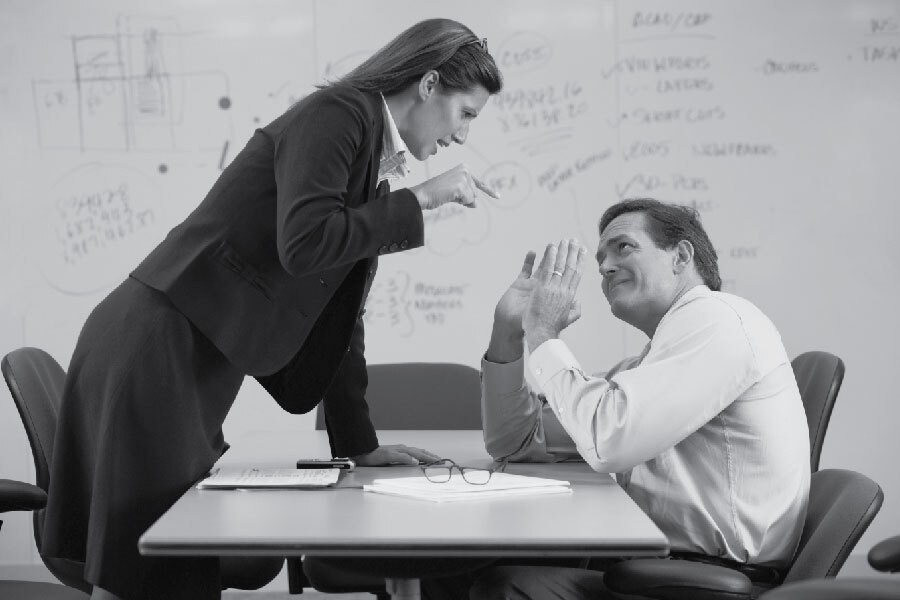 In the 2017 WBI US Workplace Bullying Survey, it is estimated that 30 million American workers have been or are now being bullied at work. Bullies tend to be in supervisory roles and are also more likely to be men (70%) than women (30%). However, both men and women perpetrators disproportionately chose women as targets for bullying.
Women bullied women in 67% of cases and men in 65% of cases, making women targets in 66% of cases overall. Because the majority of workers in the retail industry are women, chances are good they will encounter a bully at work during their career.

Although the causes for bullying vary, bullies are usually people with low self- esteem. When women in power bully other women, it has been suggested that they do so in order to protect the power base that they have already achieved. Bullies often will target those they feel most threatened by or inferior to. It is therefore not uncommon for overachievers to be targeted by bullies. Sadly, this often keeps competent women from advancing and female bullies are not positive role models.

According to Brian Amble (2007), one of the factors contributing to workplace bullying is companies stressing market processes, individualism, and the importance of managers over workers. However, many bullies do so simply because “they can.” At the time of this writing, there is no US law that specifically prohibits bullying (Canada, however, has recently passed an anti-bullying law in Quebec). As the issue becomes more prevalent and receives more national attention, workplace bullying will most likely be addressed in the courts.

According to Gary Namie, Research Director for the Workplace Bullying Institute, a 2017 survey asking if workplace bullying should be illegal found that 77% of respondents believed it should be. Since 2001 there has been a grassroots effort to pass anti-bullying laws at the state level, and in fact, several states have introduced anti-bullying legislation. However, to date, there are no such laws at the state or federal levels regulating bullying in the workplace.

Workplace bullying is a persistent pattern of mistreatment from others in the workplace that causes either physical or emotional harm.