This article looks at some of the key players and the historical records for the decision to create a convict colony at Botany Bay. 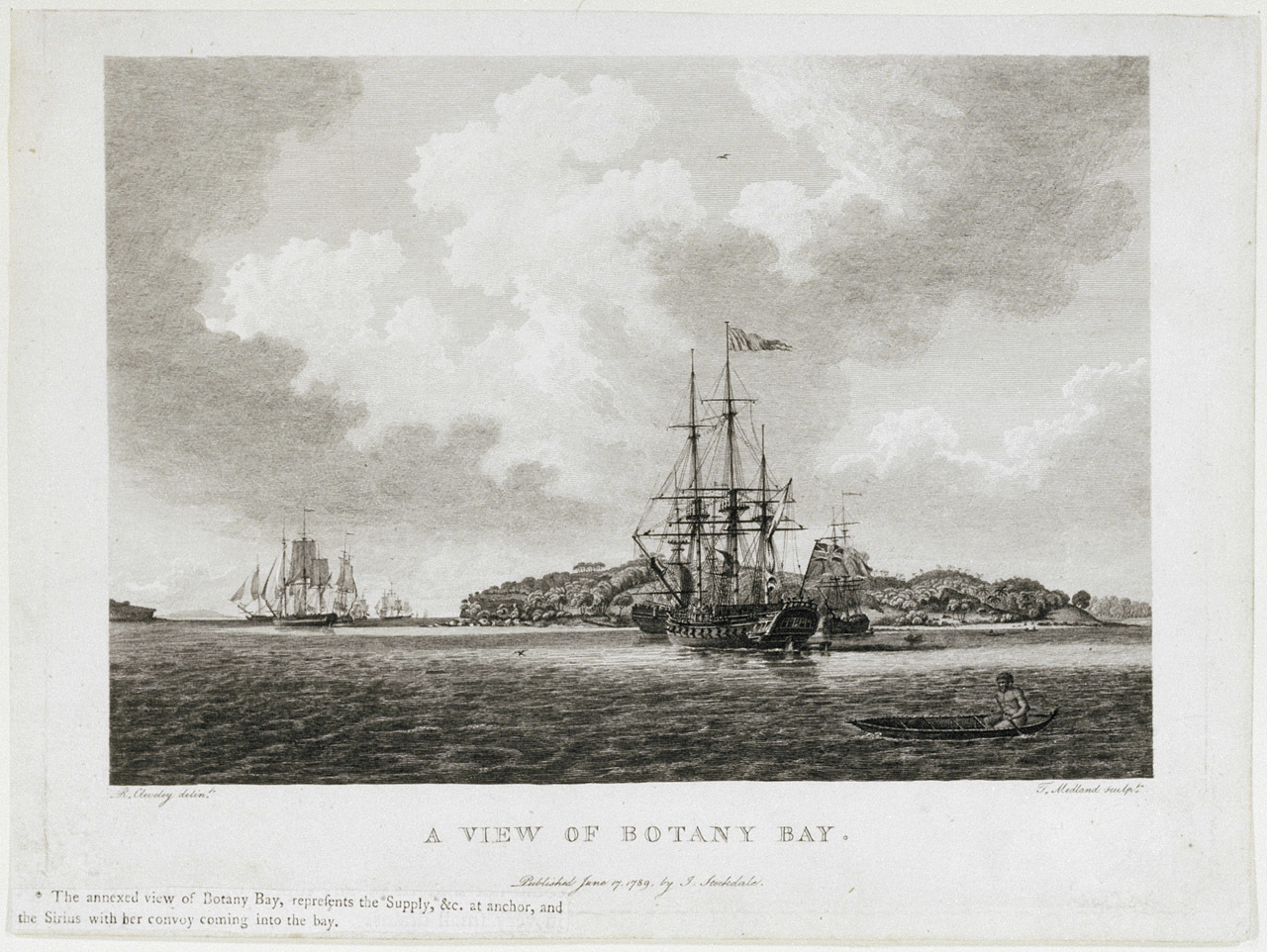 In 1788 the ‘First Fleet’, commanded by Arthur Phillips landed at Botany Bay in Australia. The fleet consisted of two Royal Navy vessels, six ships transporting convicts, and three ships of stores for the fledgling colony. In this article, we will look at some of the key players and the historical records for the decision to create a convict colony at Botany Bay.

The most comprehensive source for piecing together this history are the Historical Records of New South Wales. These volumes were printed between 1892 and 1901, and collate archival documents, and personal and governmental correspondence relating to the establishment of the British Colony in Australia. The Historical Records of New South Wales are available via the internet archive. [1]We have been considering the question of bias and interpretation when communicating history. So with this in mind it is worth quoting extensively from the preface:

“The ‘Historical Records of New South Wales’ are published with the object of affording the fullest information obtainable concerning the foundation, progress, and government of the mother colony of Australia. It was with a similar purpose that the publication was commenced, more than two years ago, of the ‘History of New South Wales, from the Records.’ All the material that the Government could command was placed at the disposal of the writer, and in the volume issued from the Government Printing Office in June, 1889, this reservoir of information was largely drawn upon. But when Vol. II of the History was in preparation it was considered desirable to make a change in the plan. It was determined that while the publication of the History should go on, the records themselves, with the exception of those that are trivial or formal, should be printed in full, in separate volumes, so that the public might have, on the one hand, a historical work founded on official documents, and on the other, the material upon which the narrative is based.” [2]

“The adoption of this course serves a double purpose. In the first place, it enhances the value of the History, for it enables the reader to turn at any point from the narrative of the writer to the fuller information which the reports and dispatches supply. The advantage gained by this treatment of the official papers is obvious. No matter how faithfully a writer of history may perform his task, he cannot cover all the ground; no matter how acutely he may criticize the actors who take part in the scenes he describes, he cannot exhibit them in so clear a light as they are shown in their own writings. Thus the publication of the Records may be regarded as desirable from the historical point of view.” [3]

The House of Commons Committee

As we have seen in step 3.4: The colony at New South Wales, in April 1779 Joseph Banks was asked to give his advice in a report to a committee of the House of Commons on where in the world he thought would be a good place to establish a penal colony. Banks advised that Botany Bay would be perfect.
The government then investigated other routes before returning to the idea of establishing a penal colony at Botany Bay.

James Matra had also travelled on board the Endeavour, where Cook considered him ‘good for nothing’. In 1783 he proposed a ‘Settlement at New South Wales’. Matra’s proposal originally did not mention Botany Bay as a potential site for a penal colony, but instead suggested it as a site suitable for those who supported British rule of America, and focussed on the potential for cultivating profitable crops, and plants and trees that would provide materials for the navy. He twice mentioned the opinions of Joseph Banks as a way of supporting his proposal. Matra later provided an addendum to the proposal, this time suggesting the suitability of Botany Bay as a location for the transportation of criminals.
Read Matra’s proposal on p. 1-8 of the Historical Records of New South Wales.
A similar plan was also proposed by George Young (also a naval officer). In August 1786 Lord Sydney sent to the Treasury a letter and “Heads of a Plan” for the convict colony at New South Wales.

In the preface to the Historical Records of New South Wales the author writes:

“Sir Joseph Banks, as pointed out in Vol. I of the Official History, took an active part in the consultations and negotiations which led to the settlement of New South Wales; and there can be no doubt that his representations, founded upon what he saw of the country during his visit to Botany Bay with Captain Cook in the Endeavour, did a great deal towards bringing about the settlement of New South Wales. After the Colony had been established he watched its fortunes with a parental eye, and the deep interest which he took in its welfare is shown by the correspondence that has come, through Lord Brabourne, into the possession of the Government of New South Wales.” [5]

The correspondence that came through Lord Brabourne is now referred to as the Banks Papers. These are a series of papers and exchanges from the personal collection of Joseph Banks, now part of a larger Banks archive held by the State Library of New South Wales. You can access their full collection of Banks papers.
However, beyond his testimony to the House of Commons in 1779, it is difficult to find evidence of Banks in the written record of proposals of the colony in Australia. In the Introduction the author acknowledges:

“Although Sir Joseph Banks had a great deal to do with the foundation of the Colony, his name seldom appears in the official correspondence, and in the papers purchased from Lord Brabourne there is little trace of his connection with the deliberations which led to the despatch of the First Fleet. But in papers of later date the active interest he took in the welfare of the new settlement and the influence he exerted are abundantly shown.”

Banks’ name does not appear in correspondence relating to the despatch of the First Fleet, but as (Britton) notes, he does appear in later correspondence in relation to subsequent voyages, botanical supplies, collections and exchanges.
To confuse matters further a memorandum from 1789, believed to be written by Joseph Banks reads:

“I could not take office and do my duty to the colony. My successor would naturally oppose my wishes. I prefer, therefore, to be friendly with both sides.” [5]

So how do we interpret Banks’ role in the colonisation of Botany Bay beyond his earlier recommendation of the location? Perhaps he was making decisions based on perceived responsibility. Does an incomplete historical record mask his involvement? Perhaps he preferred to be influential ‘behind the scenes’. Or perhaps he only became enthusiastic after the plan was in motion. Or is this an example of a later historian romanticising and elevating the involvement of a significant figure?

An unusual piece of trivia about the Historical Records of New South Wales is that volume 1 part 2 was printed before volume 1 part 1. The intention was originally to begin with the arrival of Phillips, but this was changed to make Cook the beginning of a history of the colony. The delay in printing the Cook volume came from a delay of the arrival of Cook papers.

“It was intended, when History of New South Wales from the Records was projected in 1887, that the foundation of the Colony by Governor Phillip should be the starting-point. The work of Captain Cook was regarded as belonging to the history of discovery rather than to that of colonisation; moreover, it has been described with minuteness by so many writers that there seemed no justification for an official publication, which could hardly be more than a réchauffé [rehash] of familiar second-hand narratives. When, however, it was decided, in 1891, to enlarge the original plan, and give the full text of the Records in a series of volumes published concurrently with the History, the more serious objection to the inclusion of the Cook papers disappeared. There could no longer be any reason – after the lapse of more than a century and the attempts of so many authors to describe Cooks voyage to these seas – that the famous navigator should not be allowed to speak in his own person.” [5]

Hi there! We hope you're enjoying our article: The Historical Records of New South Wales
This article is part of our course: Confronting Captain Cook: Memorialisation in museums and public spaces
close