Exhibiting the Pacific in the 18th and 19th Centuries

An article discussing how exhibitions of taonga informed how the Pacific was perceived in Europe following the death of Captain Cook. 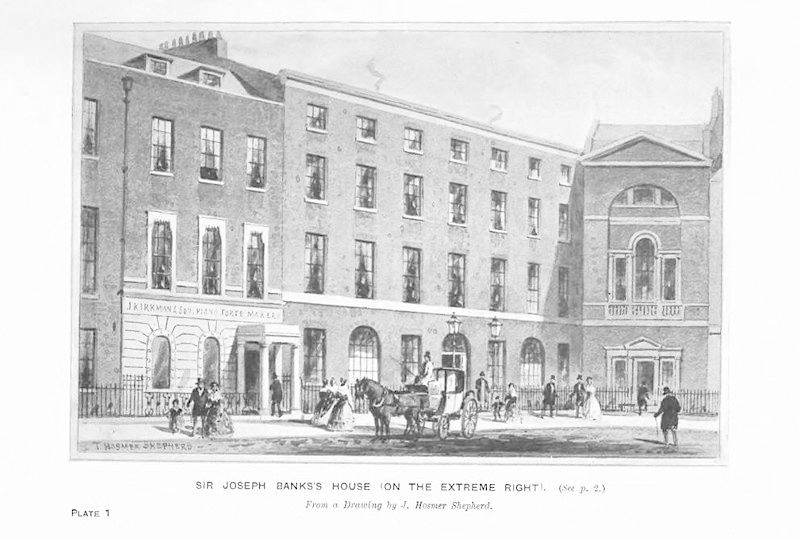 When ships returned to Europe there was an interest, not only for the stories and paintings of the voyages, but also to see the objects collected by the sailors and scientists. Many taonga were drawn by the artists and these were published in the voyage accounts. For some it was also possible to visit displays of the objects.Alongside the publications and paintings, these displays informed how the Pacific was perceived in Europe, and, following the death of Cook, linked to the memory of Cook himself. [1]

Joseph Banks’ house at 14 Burlington Street became an early ‘Museum of the South Seas’. [2] The collection was not accessible to the general public (unlike the Holophusicon below), but it was accessible to scholars and other visitors of similar social standing. In 1772 Reverend William Sheffield, Keeper of the Ashmolean Museum in Oxford wrote to his friend Gilbert White with an account of his visit:

‘His house is a perfect museum; every room contains an inestimable treasure. I passed almost a whole day here in the utmost astonishment’. [3]

Sheffield continues to describe that the collection is displayed through three rooms, the first an ‘Armoury’ containing ‘warlike and mechanical instruments’, the second displaying ‘the different habits and ornaments’ alongside examples of insects, fruits, and the herbarium (plant specimens). The final room contained the preserved remains of the animal specimens.[4]
A visit to 14 Burlington St was as important for natural historians as a visit to the British Museum.[5]
In 1777 Banks moved to 32 (then 30) Soho Square, where along with his collections he also displayed two paintings commissioned from the artist George Stubbs: the ‘Dingo’ and ‘Kangaroo.’ (This was based on a pelt of the animal brought back from the Endeavour voyage. See video in 3.2 The rise and rise of Joseph Banks.) In 2014-18 the National Maritime Museum ran a research project around these two paintings, before the opening of the Pacific Encounters gallery. Visit the Travellers’ Tails project website in the See Also section below.
In 1778 Banks became a trustee of the British Museum and he made donations from his collection to the British Museum in 1778 and 1780. [6]

The British Museum received several donations of Pacific taonga from captains, sailors, scientists, artists, the Admiralty, and Joseph Banks. In 1781 they opened their specially built ‘South Seas’ room, at the encouragement of the Admiralty. [8]
The room first opened in 1778, but with arrival of taonga from the Resolution/Discovery in 1780 it was re-arranged. Solander, who had travelled as a scientist on the Endeavour employed naval officers William Peckover and James Cleveley to assist with the layouts and labelling of the displays. Peckover had sailed on all three voyages captained by James Cook, and the Bounty. Cleveley was a carpenter on the Resolution/Discovery.
The room re-opened in 1781, and for the first time there was an attempt to display according to geography and culture. [10]
In 1805, one visitor, the American scientist, Benjamin Silliman, wrote

‘One large room is devoted to the curiosities collected by Captain Cook in his voyages. They consist principally of the domestic and warlike utensils, and of the gods and sacred implements of the people of Otaheite and other islanders of the Pacific and the Southern oceans. They are highly illustrative of their state of society and manners, and recall powerfully to ones recollection, the memory of that meritorious but unfortunate man by whom they were collected.’ [11]

Although the British Museum was a national collection, access was restricted to scholars and elite men and women. An application had to be made months in advance, and visitors were given a guided tour. By 1805 visitors could apply for a ticket for entry on the same day and opening hours were increased, as was the number of staff to give tours. By 1827 the Museum received 79,000 visitors a year. [12]
In 1786 the British Museum was given the opportunity to buy the collection of Sir Ashton Lever, who had one of the largest collections of taonga from voyages to the Pacific. In his role as trustee Joseph Banks advised that the Museum not acquire the collection. Newell suggests that this was to safeguard ‘his own status…as the museum’s major donor of Cook-voyage material’. [13] The majority of the taonga in Lever’s collection went to Vienna.

In 1775, Sir Ashton Lever established the Holophusicon Museum [14] in the area of London now known as Leicester Square. Unlike other collections, the Holophusicon was open to anyone who could afford the entrance fee.[15]
As well as donations from Cook, and purchases at auction of objects from Resolution/Adventure,[16] in the 1780s Lever acquired a large number of Pacific artefacts, courtesy of the support of Lord Sandwich, Mrs Cook, and a number of sailors from the voyages.[17]
An advert in newspapers at the time read:

‘Sir ASHTON LEVER has the pleasure to inform the Public, [that] he is now in possession of the most capital part of the curiosities brought over by the Resolution and Discovery in the last voyage. These are now displayed for public inspection; one room, particularly, contains the magnificent dresses, helmets, ornaments, instruments, utensils, &c. &c. of those islands never before discovered, which proved so fatal to that able navigator, Captain Cook, whose loss can never be too much regretted.’ [18]

The Hawaiian objects were grouped together in a room called ‘The Sandwich Isles Room’, named after the Lord of the Admiralty, Cook’s patron, whose name Cook had also given to the Hawaiian Islands. It was an unusual choice to display objects grouped like this; it was more usual to see a ‘cabinet of curiosities’ or Wunderkammer, mixed displays that attempted to ‘display the whole world’ at a glance. Scobie describes the visitor experience:

‘Visitors walked through a narrow corridor hung with kapa cloth and weapons from Tahiti, New Zealand and other Pacific islands, symbolically reenacting Cook’s voyages before reaching, as Cook had, the treasures of Hawaii’ [19]

Visitors entering the room of Hawaiian objects were greeted by an inscription: “To The Immortal Memory of Captain Cook.”
Benjamin Silliman described the room as “devoted to the memory of Captain Cook, which is here effectually preserved by a collection of arms, dresses, utensils, idols, &c. which he made in his third and last voyage.” [20]
Lever was compelled to sell his collection because of financial difficulties. In order to keep the collection together he sold it via ballot in 1786. The winning ticket was held by James Parkinson who moved the museum from its expensive location to a new more affordable home on the south side of Blackfriars Bridge. Unfortunately the new location was unfashionable and not a commercial success. Parkinson auctioned the collection in 1806. [21]

The taonga collected on the voyages became linked to the memory of Cook, and interpreted through their associations with Cook. Bolton notes

‘the Cook voyage collections are credited with establishing public interest in ethnographic collections in London, and as doing so precisely because they could be personalised to the expeditions, and to Cook’s death.’ [22]

Henare goes as far as to suggest that

‘the objects associated with him took on the status of sacred relics.’ [23]

In the next steps we will see how this relationship continued in 20th and 21st century museum displays, and how it has changed.

Hi there! We hope you're enjoying our article: Exhibiting the Pacific in the 18th and 19th Centuries
This article is part of our course: Confronting Captain Cook: Memorialisation in museums and public spaces