In this article, we will focus on cellular automata (CA) models of opinion dynamics in society.
© University of Groningen
Here you see a distribution of colour-coded opinions in a 2-dimensional space that has been simulated by a CA model: 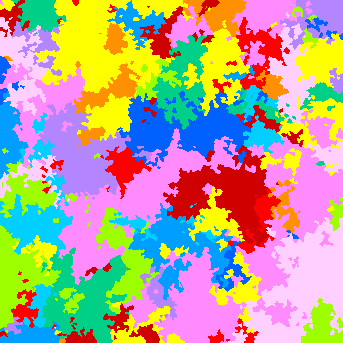 As you see, this looks in some ways similar to those real-life examples. More precisely, the similarity is in two important characteristics: To be sure: “local” does here not necessarily only mean “local” in geographical space. You can also think of a socio-demographic space, for example with the two dimensions age and educational level. Music tastes, for example, have been found to be clustered in age groups and in educational levels. Why do we see this pattern of global diversity and local consensus so often in society? And what are the conditions that affect how much diversity or how much consensus we can expect? Researchers have addressed questions like these with cellular automata models. In the literature you find quite a few different models, but most of them are based on the idea that there are two important social mechanisms at work.

The first important mechanism is social influence. Many studies of human behaviour have found that overall, when we interact with others, our opinions tend to become more similar to each other.

The second important mechanism is called homophily. This refers to people’s tendency to interact more with those others who are more similar. This idea is also expressed by the well-known proverb “birds of a feather flock together”

View Course
The American political scientist Robert Axelrod proposed in 1997 one well-known CA model of the interplay of social influence and homophily. There are many other models, but let us take his as an example. Axelrod called it a model of “cultural dissemination”. He showed how the model produces opinion diversity and clustering through social self-organisation. In the following, we explain how Axelrod’s model works and show it at work. The model has the key features that we know from CA models in general: agents are located in a spatial structure and interaction is local. More precisely, every agent can only interact with his local neighbours and can also only be influenced by these local neighbours. In this picture here, you see the example of a von Neumann neighbourhood around the agent in the cell in the centre. 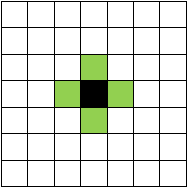 Every cell contains an agent. Every agent has an opinion, called “trait”, on each one out of a number of opinion dimensions called “features”. Arguably, the more features and the more traits there are, the more complex is the opinion space in society. Here you see an example In the example there are three features, “music”, “religion” and “politics”. Per feature, the agent can choose one out of 2 possible traits. For music, for example, the choice is between “classic” and “rock-pop”. For religion, the choice is “Christian” or “Islam”. For politics it is “left” or “right”. Here you see the states that two prototypical agents can have: Agent A = {classic, Christian, left} Agent B = {classic, Muslim, right} Now, at every time point, one of the agents in the model is randomly chosen and gets the possibility to interact with one of his randomly chosen neighbours. But even if there is a possibility of interaction between two neighbours A and B, this interaction is not certain to happen. Whether A really will interact with B depends on the similarity of their opinions. This is the homophily principle in the model: the more similar the agents are, they more likely they are to interact. More precisely: if A and B have the possibility to interact, the probability that they really interact is given as In our example, our agents A and B agree on only one out of three features: a preference for classic music. That is: their probability to interact is 1/3. The next step in the model is social influence. Social influence happens IF the two agents interact. If they interact, then they will become more similar. Suppose A influences B. Now look at the two features in which they are still dissimilar (religion and politics). One of these two features is now randomly picked and then B adopts the opinion of A on this feature. Here you see what happens. For example, if religion is chosen:, then B will change her religion from “Islam” to “Christian”. As a result the similarity of A and B has increased. Now they have 2 out of 3 features in common. Next time, they are more likely to interact. Now you have seen all the assumptions of Axelrod’s model. Let us summarize: Now let us see what happens when all agents follow these rules. Here you see one possible scenario often used in the literature: There are F=5 features, and Q=15 traits. We have a world with 10×10=100 agents. Initially every agent chooses all traits on all features randomly. Here you see such an initial random distribution for Feature 1, Feature 2, 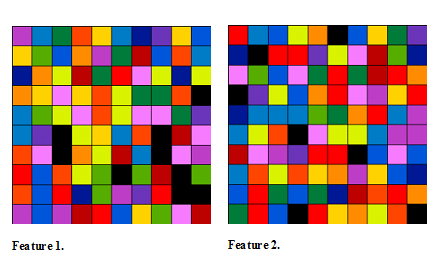 What do you think will happen if we start the simulation? Will a consensus develop? Or will diversity remain as high as it is at the outset? Think a moment about this. If you want to try it out yourself, you can use a NetLogo implementation of the Axelrod model. Note the initial parameter setting in that model has 10 traits per feature, while we use here Axelrod’s standard example of 15 traits per feature. Change this first, before you run the program. Also, keep in mind that the visualisation shown in that NetLogo program looks a bit different from our pictures here. The program does not show you which colours one feature has at a time. Instead, it shows how the boundaries between cultural regions develop. A cultural region is a set of neighbouring cells that have the same trait on all features. Let us now see for a typical run how the colours of the first feature change if we conduct the simulation. Below you see to the left the random initial starting configuration. After a while the pattern stabilizes and we see – in the picture to the right – that clusters with different colours have emerged. If we inspect these clusters more closely, we see that within a cluster agents agree on all features. They are maximally similar. Between two neighbouring clusters, however, there is no agreement whatsoever. 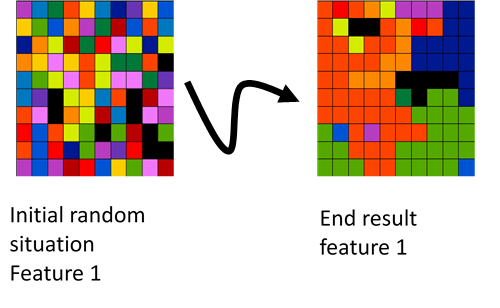 Here you can see another typical example, now run with the NetLogo program “Cultural dissemination”. 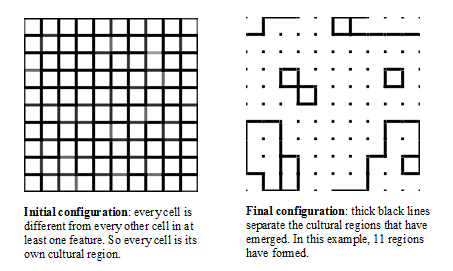 Hi there! We hope you're enjoying our article: Cellular Automata (CA) Models of Opinion Formation
This article is part of our course: Decision Making in a Complex and Uncertain World