Life in an Ebola treatment centre

The experience of Ebola treatment from the perspective of doctors, patients and survivors 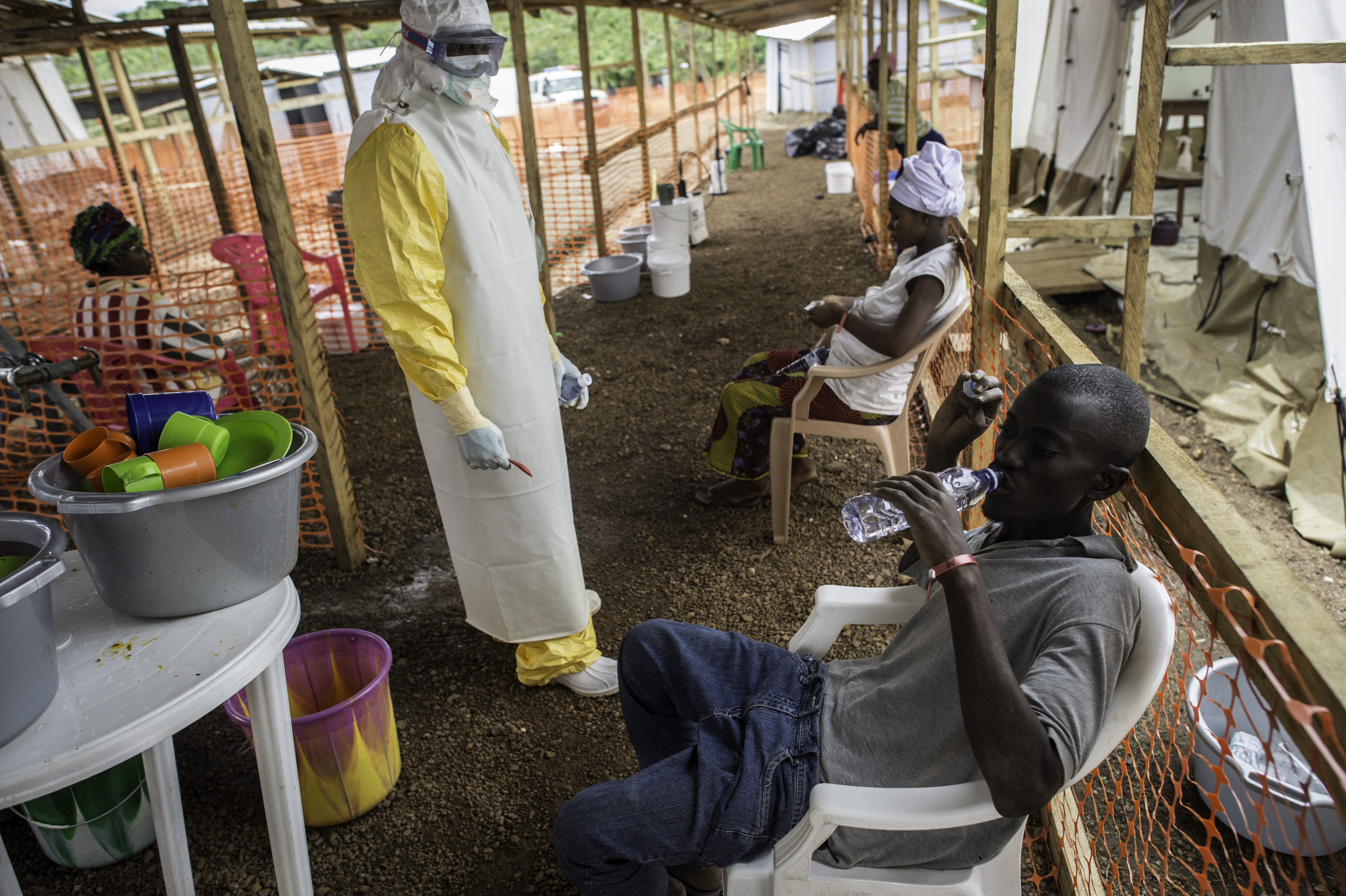 Hundreds of healthcare practitioners from all over the world have been deployed to work alongside local staff in caring for the sick in the Ebola outbreak. Organisations such as Médecins Sans Frontières have been responsible for constructing and maintaining treatment centres in the countries affected, as well as facilitating the placement of local and international doctors, nurses, and logistics staff since the outbreak was officially declared in March 2014.1 Sick individuals must make a very real and difficult choice about whether to attend the centres, due to the long distances travelled to reach them, a lack of information around their function, and the stigma attached to doing so. This article looks at the experiences of both staff and patients in these centres.

From the staff perspective

‘Every day, I follow the strict infection prevention and control procedures to enter the treatment site. The smell of chlorine is ubiquitous: as we enter, we stand and wobble one legged, as each shoe is sprayed, after washing our hands, both with chlorinated water of different concentrations. Scrubs and boots are handed over and changing into them is a challenge: nothing must touch the floor.’

In the high risk zones where PPE is worn, the cumbersome attire provides a barrier between patient and carer, with limited opportunity for human interaction. Caring for the ill from behind this barricade is a new and unfamiliar challenge for many; the PPE can cause temperatures to exceed 45°C and litres of sweat to pool inside the rubber gumboots, meaning staff can only remain in the high-risk zone with ill patients for very limited periods of time (often only 45-60 minutes).4 In a profession in which communication is important, this change can be hard to deal with:

‘Heat [from wearing the PPE] means that there is no time to really get to know patients, to sit with them and answer questions, listen to their fears and hopes, hear who they are as people. This distresses me. It is in my physician’s heart to know my patients, to weave in personal and emotional support for their healing. I regret this particularly when I am helping someone who is dying. My desire is to sit down and be present.’5

Staff are all too aware that there is no specific treatment for Ebola, and that they themselves are at risk of contracting the virus: ‘As we prepared to go to the front lines of Ebola medical care […] we felt a certain unease about treating a highly transmissible infection for which there is no vaccine, no specific therapy, and a high mortality rate.’6

‘For us, the priority is personal protection and safety. Continuous vigilance regarding this leads to obsessive hand washing and keeping space between ourselves in order to apply the “no touch” mission policy. Actions need to be carried out carefully and slowly in order to prevent mistakes, as a mistake has the potential to bring the whole team down.’3

Being on the front line of an infectious disease outbreak with a high case fatality rate can be a daunting experience, and staff are not immune to distress and anger when death and uncertainty are ever present. However, many consciously push themselves to carry on out of necessity, and prepare themselves for another day in the treatment centre:

’Despite fatigue, I can’t get myself to rest. My anger and frustration is too much. Ever present in my mind are the images of the day. Once more, we saw the sheer horror of a father, as we buried his 7-year-old daughter. Once more we brought five suspected Ebola-infected people from some remote villages to our Ebola management centre. Once more, we had to explain and justify to several dozen villagers why we disinfect their homes with chlorine. And once more, we had to watch, powerless, a pregnant woman bleeding internally to death before our eyes. And this is still nothing compared to what is happening in Monrovia. Time to sleep. Tomorrow, the cycle starts again.’7

As well as the doctors and nurses there are many other staff involved, as Catherine McGowan from the London School of Hygiene & Tropical Medicine writes in the Huffington post:

‘For every one doctor and three nurses working at an ebola treatment unit there are approximately 26 water, sanitation and hygiene (WASH) staff. Most of the WASH staff are recruited locally. Some of the senior WASH staff are former teachers who lost their jobs when the schools closed. The remainder were hired with little or no previous related work experience…WASH staff are responsible for cleaning/disinfecting wards, cleaning spills (e.g. blood, vomit, excrement), emptying buckets of vomit/excrement, handling dead bodies, disinfecting ambulances, and waste management including the operation and maintenance of the incinerators….The WASH staff are at considerable risk in an Ebola treatment centre…. Many of them do not tell their families or friends that they are working at the units out of fear that they will be stigmatised. Many struggle to find a place to live, to find an accommodating landlord who will allow them to rent a room. Many will lose their jobs when ebola has been brought under control. The stigma and the secrecy may last some time longer.’

From the patient perspective

It is difficult for people to attend the centres:

’They are afraid. We’ve had 89 deaths at the centre. People think that, because there is no treatment available, they will come here to die. There are a lot of rumours that we are cutting off heads. Or that we are taking organs and selling them. At the same time, some people are saying that Ebola does not exist.’8

To reach the treatment units sick patients often have to travel for many hours across rough terrain in stifling heat:9 ‘The distances are too much to take for patients who are very weak,’ says Mohamed, an ambulance driver in Kailahun, Sierra Leone. ‘Some lose their lives.’ People who arrive after the long journeys may be too drained to put up much of fight against the disease later on.
As patients arrive at the centre, they are greeted by faceless healthcare workers in personal protective equipment (PPE). Patients first go through a triage process, whereby their status is assessed. Centres typically consist of several zones, where different patients are held based on their diagnosis. Care is taken not to mix patients who are ‘suspected’ cases with patients who have been formally diagnosed with Ebola (as discussed in an earlier step).
One important feature of the treatment centres is the patient visitor area. Here, patients are able to speak with their relatives or community leaders over a fence that is wide enough to prevent transmission of the virus. This is a key way to promote transparency regarding the work and care that goes on at treatment centres.

‘We re-designed the Ebola management centre to maximise transparency with the local community about our work and address rumours about what was happening inside. This involved removing the high barrier fences and replacing them with lower, see-through fences so that the people outside were able to watch how the centre was run. Prior to this, there had been an air of suspicion about what was going on behind our walls. People went in but were rarely seen coming out again.’10

The symptoms of Ebola are severe, as described in an earlier step: ‘the pain is too great. You have no appetite and nothing stays in your system. You vomit a lot, you are dehydrated – then comes the diarrhoea. It’s bad, terrible, devastating. It makes you want to give up on life.’11 Patients have to watch the suffering of others around them: ‘I was there for two weeks. In the same tent as me in the treatment centre, a two-month-old baby died from the disease. And I lay listening to a lady who cried until she died.’11 Many will also witness or hear news of the deaths of their family members. For patients who are fortunate enough to survive Ebola, being discharged from the treatment centre is a defining moment. Before patients leave the ward, they are presented with transport money to get home (about US$10), a clean set of clothes, and a certificate declaring that they are healthy and no longer have Ebola. They are photographed and congratulated by staff, and in humble way, celebrated for their resilience.12 The next part of their journey begins, and for some it will be very difficult. The reality of being an Ebola survivor is not an easy business in a climate so fraught with fear.
© London School of Hygiene & Tropical Medicine