If you have taken an introductory economics class before, you probably learned about the discount factor and present value already. The key intuition is that a dollar today is worth more than a dollar in the future. At the minimum, a dollar today can be deposited in a savings account, and its value will grow over time. For example, if the savings account gives you a 5 percent annual interest, 1 dollar today should be equivalent to 1.05 dollar next year. Similarly, one dollar next year is equivalent to 0.95 dollar today (=1/1.05). In this case, we would say that the present value of one dollar next year is 0.95 dollar.The possibility of investment and savings can partially explain why people prefer money now to money in the future. But laboratory experiments indicate that individuals’ preference toward money and consumption now may be a lot stronger than can be explained by interest rates alone. For example, economist Richard Thaler asked college students how much money they would require in 1 month, 3 months, and 1 year, in order to be indifferent to receiving $15 now. The median response was that receiving $15 now was equivalent to receiving $20 in a month, $30 in 3 months, and $60 in one year. Clearly, such strong present-oriented preferences cannot be explained by bank interests and other investment opportunities.In any case, economists express people’s preference toward present consumption now over consumption in the future using what’s called a discount factor. For example, suppose I am indifferent between having $10 today and $20 one year from today. (For now, let’s not worry about exactly why I am so present-oriented.) We can express my preference by saying my annual discount factor is equal to 0.5. ($20 next year is equivalent to $10 today for me.) If my annual discount factor is fixed at 0.5, I should be indifferent between having $10 today and having $80 three years later.\(\quad\quad\quad\quad\quad\quad\quad\quad\quad\) \((80=10/(0.5)^3)\)

View Course
If people find that money and consumption now is worth much more than money and consumption in the future, wouldn’t they feel that punishment now is much worse than punishment in the future? Suppose that my level of unhappiness (“disutility”) associated with a one-year prison sentence is equal to 100 “utils” (an arbitrary measurement unit), and my annual discount factor is equal to 0.75. In other words, having to serve one year in prison next year is just 75 percent as bad as having to serve one year in prison right now.Suppose I am considering whether to commit a crime that would lead to a three-year prison sentence if caught. If it takes one year between the time of crime and the time of prison entry, my cost of incarceration would be equal to 173.45 utils.\(\quad\quad\quad\quad\) \((0.75)100+(0.75)^2 (100)+(0.75)^3 (100)=173.45\)However, if my prison sentence were to begin on the day of offense, the cost of incarceration would be 33 percent higher.\(\quad\quad\quad\quad\quad\) \(100+(0.75)100+(0.75)^2 (100)=231.25\)Being a rational decision maker, I will be much less likely to offend if the punishment is delivered sooner than later.The simple calculation above shows that the delivery of “swift” punishment can substantially increase the cost of crime for would-be offenders. The administrative cost of a three-year prison sentence itself should not change much, regardless of whether it starts today or next year. (It is still a three-year prison sentence.) But because offenders may find the prospects of imminent punishment a lot more unpleasant than delayed punishment, the timing of punishment can make an important difference in the extent of deterrent effects of prison.Of course, the extent to which an increased celerity of punishment can deter criminals would depend on their discount factors. Consider Table 1 below, which shows the level of disutility associated with a three-year prison sentence under different discount factors. Let’s assume that the disutility of a one-year prison term is still equal to 100 utils.

[Table 1. How Bad is a Three-year Prison Term?] 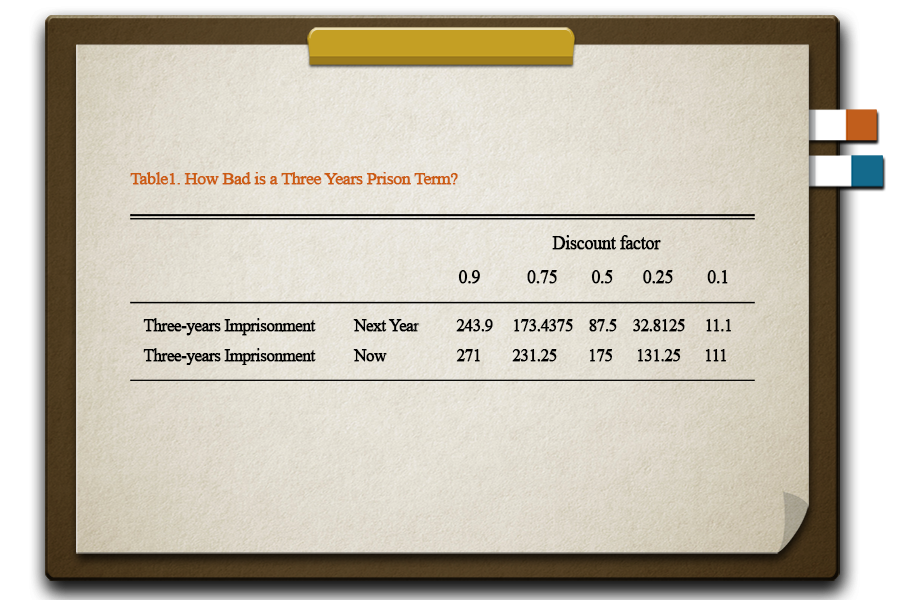 Economists have long suspected that high discount rates and present-oriented preferences may be one reason why so many students drop out of high schools when doing so usually leads to a much lower life-time income. High discount rates may also explain the null finding by David Lee and Justin McCrary, where those just above age 18 continued to commit crimes at the similar rate as those just below age 18 even though they face a lot more severe punishment than before. In both cases, high-risk students and youths may be heavily discounting their future earnings after high school graduation and displeasure from future prison sentences.If high-risk individuals are much more present-oriented than the general population, we can use this to improve our crime-control policies in important ways. First, reducing the delay between the time of offense and time of punishment can boost its deterrent effect. Policy reforms that make law enforcement, judiciary, and correctional systems more efficient may lead to more swift delivery of punishment and deter more would-be criminals.Sometimes, the delay between the time of offense and the time of punishment is there for a good reason. (For example, it would not make much sense to execute a suspected serial killer on the day of arrest.) The suspect must be given enough time to prove his innocence and the court should be given enough time to carefully examine the case. But prompt delivery of punishment may still be possible without violating the suspects’ legal rights, especially in cases where advanced technology can certainly and promptly detect violations (e.g., illicit drug use, speeding violation).Second, swift punishment may allow governments to achieve a higher level of deterrence while lowering the severity of punishment. As we have seen from the HOPE experiment, potential offenders may be deterred more by an immediate jail term lasting a few days than some possibility of a multi-year prison sentence in the distant future. Since a few days of jail term costs a small fraction of multi-year imprisonment, government may be able to achieve greater deterrence while saving a lot of criminal justice resources. Again, it would not make much sense to apply this “quick, certain, and mild” punishment on all offenders, but for certain types of offenders, this approach may actually work very well.Lastly, depending on discount factors of potential criminals, deterrent effects of long prison sentences may be surprisingly small. Suppose an individual is considering whether to commit a crime which can result in a 10-year prison sentence, and his annual discount factor is 0.75. Continue to assume that the disutility of a one-year prison term is equal to 100 utils. Note how the deterrent effect of each additional year in prison sharply decreases. For the individual making the criminal decision now, the second year in prison is 75 percent as bad as the first year, the third year is 56 percent as bad, and the fourth year is 42 percent as bad. The ninth and tenth years are just 8 percent and 6 percent as bad as the first year! (Intuitively, do you think having to serve 10 years in prison instead of 8 years would make the same difference as having to serve 3 years in prison instead of 1 year?)Even if the incapacitation effect of an additional year of prison remains similar over the years, the total crime-reducing effect of an additional year of prison (that is, the sum of incapacitation and deterrent effects) may decline fast. On the other hand, the taxpayers’ cost of each additional year of incarceration is going to be the same, if not more. Except for very high-risk offenders (for whom the incapacitation effect should be very large), long prison sentences do not look like an efficient use of the criminal justice resource.

Hi there! We hope you're enjoying our article: Certainty, Severity, and Celerity
This article is part of our course: Economics of Crime