In this step, you will learn about the strongest encryption scheme, the one-time pad (or OTP), as implemented by the Vernam cipher. You will also find out how its ‘perfect security’ can be compromised.

In this step, you will learn about the strongest encryption scheme, the one-time pad (or OTP), as implemented by the Vernam cipher. You will also find out how its ‘perfect security’ can be compromised.

A one-time pad refers to a system where the sender and receiver both have an identical copy of a pad of pages. Each page contains a different key, usually in the form of a very long random sequence of numbers or letters. Every time a message is sent, a new page from the pad is used and is then carefully discarded by the sender and receiver as it must never be used again. The key in a one-time pad cipher must be as long as the plaintext. 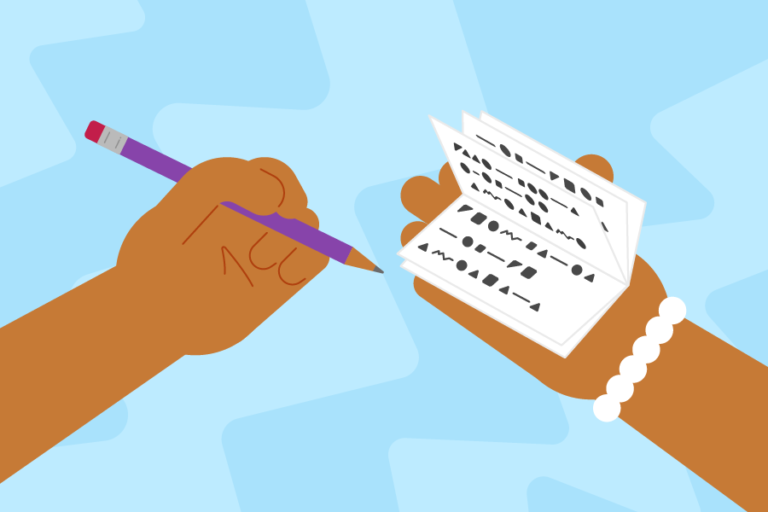 To explore how this cipher works, I will use an implementation devised by Gilbert Vernam in the early 1900s.

Imagine that you and I each have a copy of a one-time pad. Today I want to send you the following message:

MEET ME IN HUT 8 AT DAWN

Now I will get the first four letters of the key and encode these characters in the same way:

Each binary digit of the plaintext must be combined with its equivalent binary digit from the key using a logical XOR operation. To carry out this operation, the values of the two bits are compared; if they are the same (i.e. both 0 or 1) then XOR returns 0, and if they are different, XOR returns 1. This logic can be shown in a truth table as follows:

You can find out more about XOR and truth tables in our course How Computers Work, which is accessible for teachers in England through Teach Computing and for everyone else directly through FutureLearn.

This is the XOR process for the first letter of the first word of my secret message:

And now here is the XOR process for the whole first word:

I would send these binary sequences along with the ciphertext for the rest of the message, encrypted using the same technique.

When you receive the message, the process is reversed.

Is this really perfectly secure?

In theory, yes! Because every character of the plaintext is encrypted with a different character from the key, the Vernam cipher preserves no patterns. A brute-force attack on our secret message would reveal every possible permutation of 24 characters. Some of these would be nonsense but hundreds would make sense and the eavesdropper would have no idea which was the actual message.

It has been proved that the cipher is perfectly secure so long as the following are also true:

However, two of these conditions are very tricky to satisfy: