What Are the Main Sustainability Issues on Energy?

In this article, we will summarize findings from Global Energy Assessment, IPCC and IEA to find what the main sustainability issues on energy are. 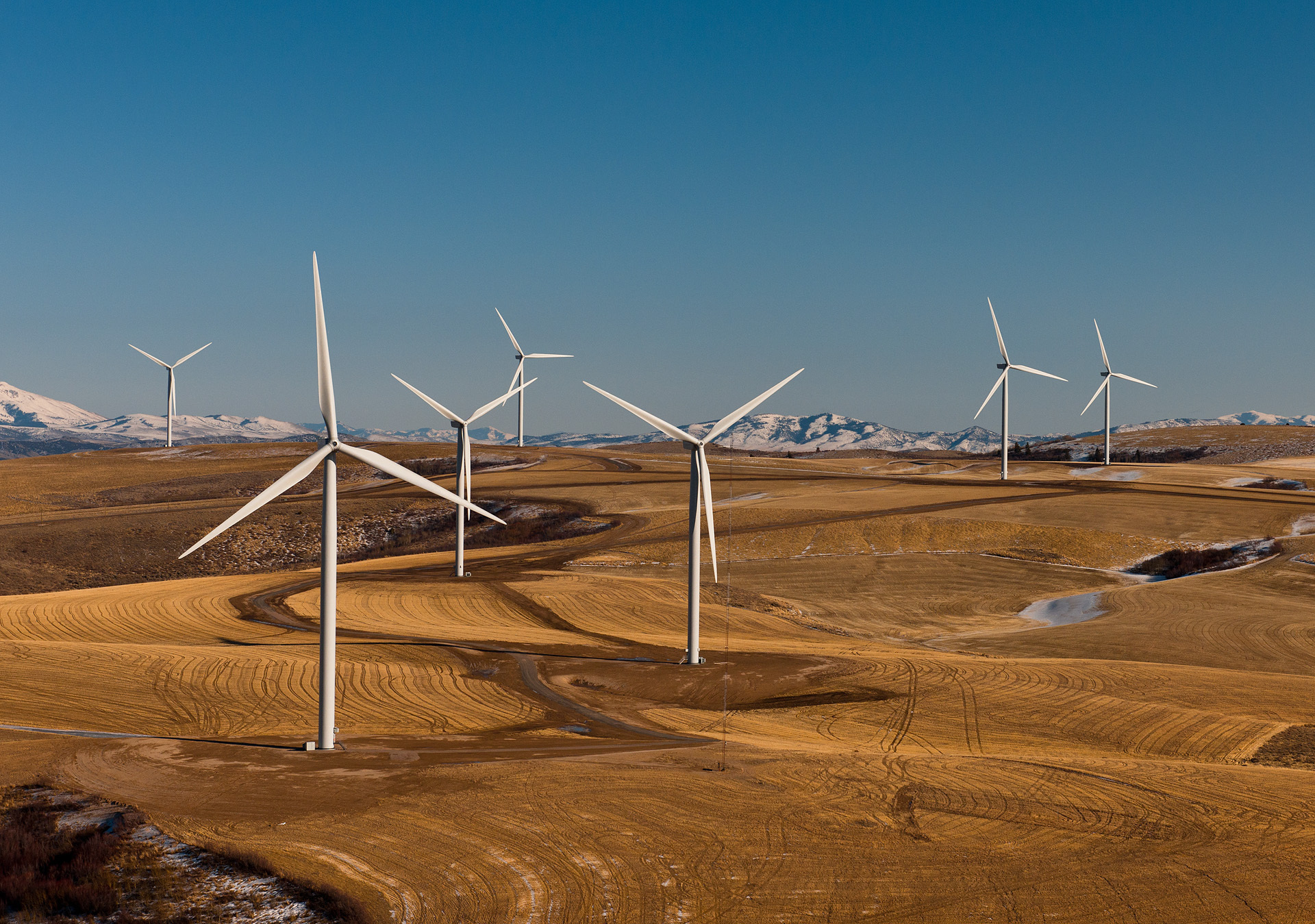 Energy is essential for human development, but also poses several challenges for humanity. Energy is related to many global systems, such as economic and social development, food production and security, health, climate and the environment. Energy thus fulfils a supportive role to many (global) challenges we face. The Global Energy Assessment (GEA)[1] has extensively examined the main sustainability issues on energy. Let us look at some of the most important issues the GEA addresses. The industrial revolution was the start of humanity’s reliance on fossil fuels (coal, oil and gas). They were abundant and ever cheaper, and quickly provided more than half of the world’s population with its power. On the other hand, energy extraction, conversion and use are major contributors to Greenhouse Gas (GHG) emissions. The most obvious GHG is carbon dioxide (CO2), which emissions were estimated to be 26.4 Pg (peta-gram) in 2005. This means energy extraction, conversion, and use represent 80% of all anthropogenic sources of CO2. Despite a growing number of climate change mitigation policies, annual GHG emissions grew on average by 1.0 gigatonne carbon dioxide equivalent (GtCO2eq) (2.2 %) per year from 2000 to 2010 compared to 0.4 GtCO2eq (1.3 %) per year from 1970 to 2000[2]. Moreover, human activities accounted for 30% of the methane (CH4) emissions in that year. The impact of those GHG emissions is immense, since they are major contributors to the global warming effect. Even small increases in temperatures may affect crop growing in both temperate and tropical regions. Furthermore, significant impacts are expected for renewable energy sources, such as cloud cover, rainfall and wind speeds. See the figure below for an analysis by the International Panel on Climate Change (IPCC) on the impacts of global warming. 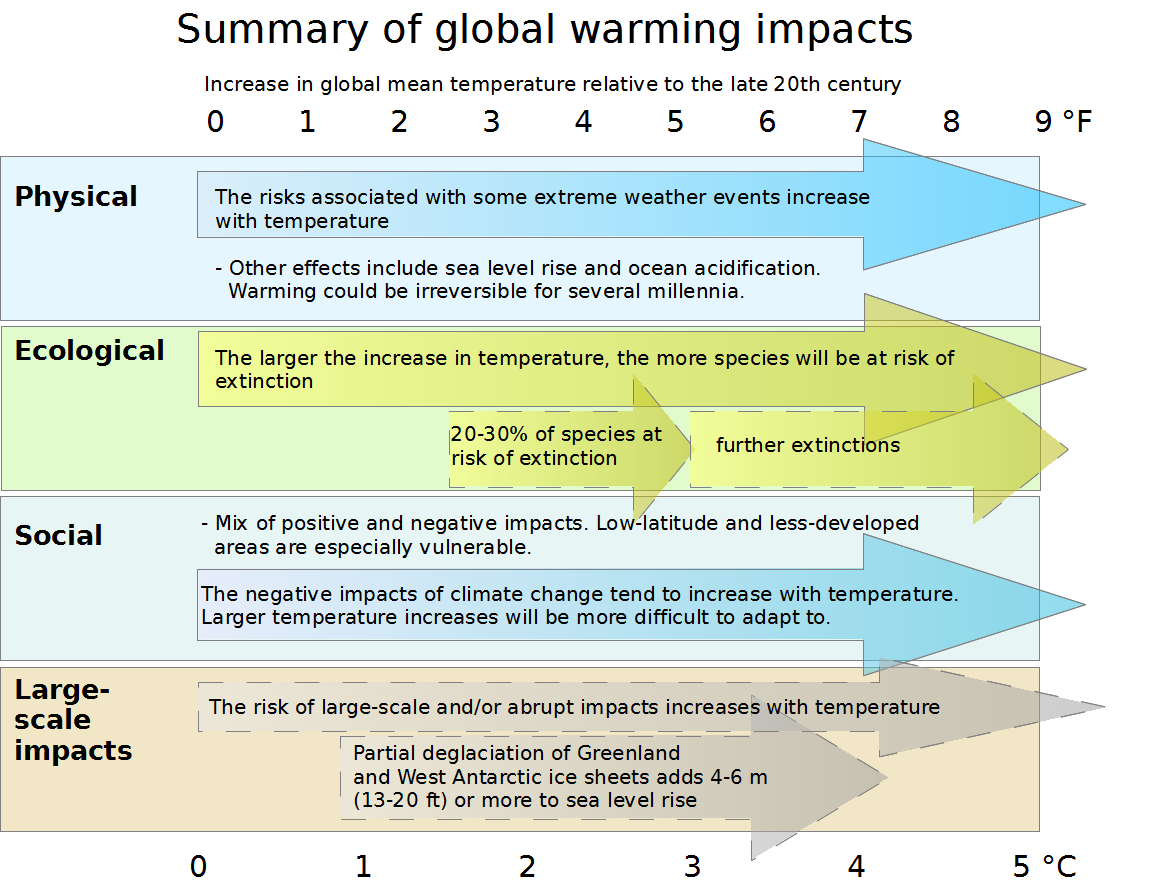 By Enescot (Own work) [CC0], via Wikimedia Commons

Many relations exist between the energy system and the environment. On all different levels and scales they are apparent. Local impacts on the environment and the ecosystem have been recognised for long, but more and more the results of the anthropogenic pressure we put on Earth and its systems come forward. We risk irreversible disruption of systems on local, regional and global scales. Tipping points can be reached, which could potentially end in irreversible change, such as the melting of the ice sheet in Greenland or the disappearance of tropical rainforest.Not only global, but also local and regional air pollution and ecosystem degradation are results of energy-related activities. Those could have an impact on human health. In developing countries, indoor air pollution resulting from the use of traditional biomass (wood) in open fires or cooking stoves that are inefficient, are estimated to result in about 2 million premature deaths per year, mainly because of respiratory and other diseases. Women and children are the major victims.The biggest social challenge both developed and developing countries face is poverty. Around 3 billion people live on less than US$2 a day and 1.4 billion on less than US$1.25. Approximately a third of the world’s population still relies on traditional biomass such as wood and another 400 million cook and heat on coal. Enhancing the access to electricity, fuels and cleaner systems for cooking has the potential to improve health by reducing air pollution.It is clear we currently live in a world that is relying on energy more than ever. Although the energy systems differ in developed and developing countries, the impact of all energy systems on a global level is undeniable. Anthropogenic activities put pressure on global ecosystems and the environment more and more. Increasing emissions lead to increasing temperatures, which in the end will result in climate change with disruptive impacts globally. Not in the least will it affect our social and economic development.

An energy transition is required

View Course
So the question remains how we are going to tackle the major challenge, climate change, if we want to stay on our current path of development. Recently, climate policies have focused on avoiding dangerous and irreversible climate change. Scientists have calculated that limiting the global surface temperature to a 2 degree Celsius increase compared with pre-industrial times would be an adequate means to avoid this irreversible change. Rapid reductions of global CO2 emissions are needed in the energy sector. After a peak around 2020, emissions have to shrink to 30-70% below 2000 emission levels by 2050. Eventually, in the second half of the century, the emissions have to reach zero. But this limiting condition is put under pressure by a projected global population of 9 billion by 2050, which are also looking for prosperity and well-being. The worldwide energy consumption has exceeded 500 exajoules (EJ) in 2012 and continues to rise rapidly. The International Energy Agency[3] has shown that from 1990 to 2008, the world’s population has grown by 27%, while the average energy use per person increased by 10%. Other research has shown[4] that with a continuing energy demand increase and current use of fossil fuels, we are bound to a 4 degree temperature rise by 2060 if we do not take climate-related action. An energy system transformation is thus required.Many disruptive consequences are related to climate change. The melting of ice sheets contributes to sea level rise, and changes in global weather patterns affects extreme weather events such as floods, droughts, and cyclones. Besides, the oceans are affected heavily, either by acidification, or oxygen depletion, with consequences for ocean life. The intensity, frequency and amount of precipitation is thus severely influenced by mankind. More directly influenced are animal and plants populations. Human activities that influence the climate over the last century have resulted in 50 to 1000 more extinctions of species than would have naturally occurred.The Millennium Ecosystem Assessment[5], initiated by the United Nations (UN) in 2001, assesses the consequences of ecosystem change for human well-being and provides a scientific basis to undertake action for a sustainable use of those systems. Some key findings are that due to rapidly growing demands for food, fresh water and fuel, humans have influenced and changed ecosystems faster and more severe than ever over the past 50 years. Substantial and largely irreversible loss has been inflicted to the diversity of life on Earth. Although those changes have contributed to many gains in human well-being and economic development, the degradation resulting from those changes have increased risks of nonlinear changes and poverty for certain groups of people. Those problems will significantly diminish benefits that future generations will be able to reap from ecosystems.For an extensive overview of the global challenges and their linkages to energy, including background on technologies, challenges and policy measures, see the “Global Energy Assessment”[1]. For a comprehensive assessment and descriptions of the required transitions on a global level, take a look at the Millennium Assessment.[5]In sum, the seriousness of the issue is evident. Read page 6 to 9 (the part called SPM.3) from this report to obtain a deeper insight in the current trends of climate change. The magnitude of the human induced problems on the global ecosystem is large, but it is not too late to act. Later, we will look into possible pathways for the future.References[1] Global Energy Assessment, 2012.[2] International Panel on Climate Change, 2014. AR5WGIII – Summary for Policymakers.[3] International Energy Agency, 2014. World Energy Outlook 2014 – Executive Summary.[4] Anderson, K. 2012. Climate change going beyond dangerous–Brutal numbers and tenuous hope. Development Dialogue, 61, 16-39.[5] Millenium Ecosystem Assessment, 2005. Ecosystems and Human Well-Being – Synthesis.
© University of Groningen

Hi there! We hope you're enjoying our article: What Are the Main Sustainability Issues on Energy?
This article is part of our course: Solving the Energy Puzzle: A Multidisciplinary Approach to Energy Transition