This article deals with the spatial consequences of renewable energy solutions.
© University of Groningen
Ever since sustainability has been a central issue on the global governance agenda, the sustainable provision of energy has also been in question. The shift towards the use of more renewables is a prominent element in these debates. It is a shift that is not easy and among its causes are the spatial consequences already hinted towards in this other article. A difficult shift On the one hand, the current fossil-fuel based energy system is far from easy to change. This energy system is not just based on an infrastructure of wells, pipes, energy plants, networks and consumers. It also involves a multitude of stakeholders, each with their own interests and access to resources and power. In the meantime, contracts and existing regulatory systems help stakeholders interact and constrain their freedom to act. To put it simple, the energy system is a complex web of interrelated actors and networks, both in a physical, economic, social and institutional sense. Apart from limitations to fully oversee and grasp such a complex web, ownership and power are fragmented, limiting the capacity of any actor to alter the energy system. Classic planning and policy approaches tend to focus on the capacity of stakeholders to come to decisions regarding policy ambitions and approaches to try and achieve them (Allmendinger, 2002). Faced with the complex web that characterises the energy system, such approaches can hardly be expected to render many results, cf. (De Roo and Silva, 2010, Kemp, 2010, De Roo et al., 2012). Planners and policy makers, including spatial planners, are thus asked to come up with new approaches. On the other hand, we also saw how a move towards a sustainable energy system confronts spatial planners with quite specific challenges. Again, careful planning focused on both the physical landscape and the societal responses is required. Figure 2.1: Windfarm in Lower Saxony, Germany 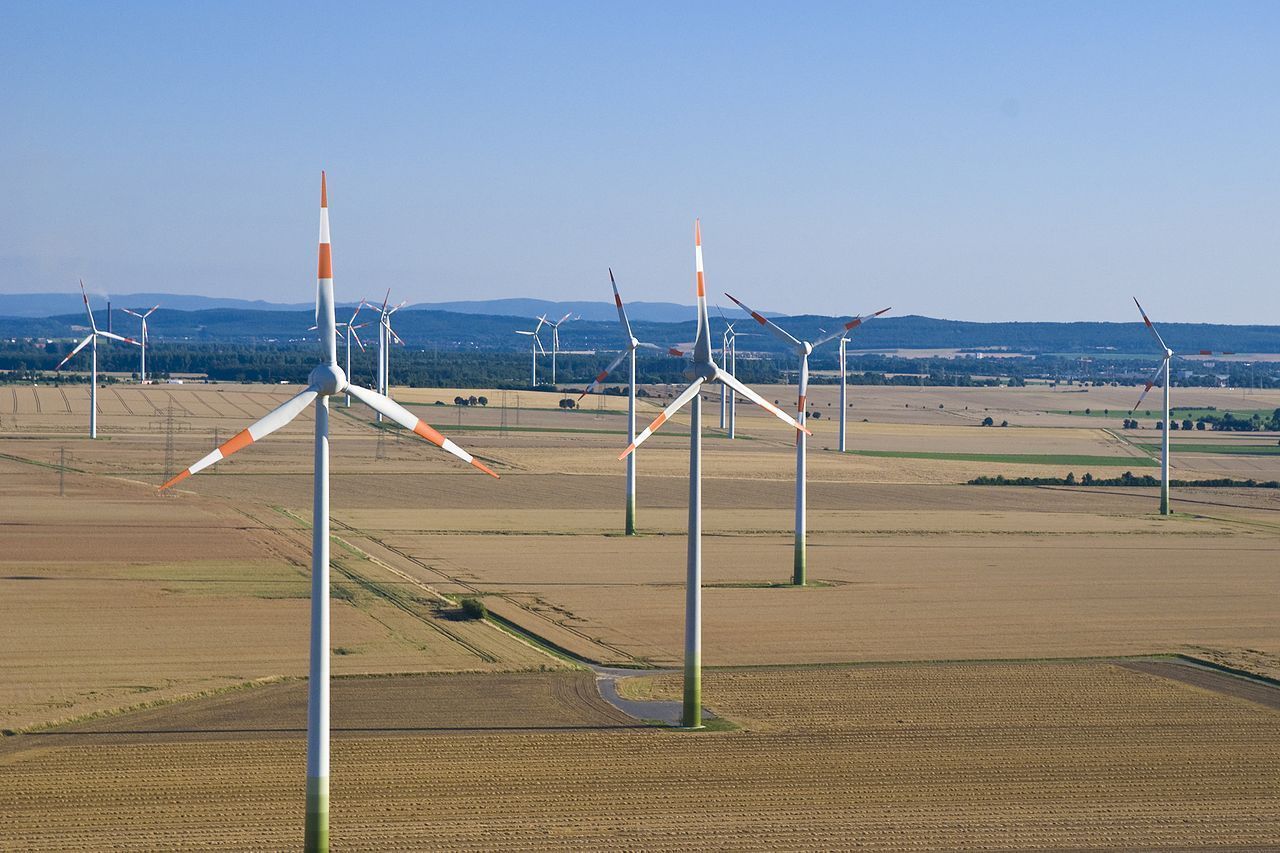 Source: Wikipedia, Philip May Spatial consequences The last decade is showing a serious increase in renewable energy production sites in many places in the world. Among these places is North-Western Europe, where countries such as Sweden, Denmark and Germany are among the countries where shares of renewables have increased significantly to respectively about 50%, 25% and 15% of the energy mix. Despite these successes, problems are also manifesting themselves.

View Course
From a spatial perspective it is important to note that vast areas of space are needed to produce sufficient energy to support the current energy consumption. Most renewables harvest energy above the ground, especially clear in the cases of wind energy, solar energy, biomass production and hydroelectricity. In many places of the world, with North-Western Europe as an example, the land is often already used for many existing functions, be it housing, transport, industry, offices, nature, agriculture or recreation. Sometimes, these existing land uses offer great opportunities for renewable energy production, for example in the use of biomass from agriculture or residual heat from industries. Sometimes, little competition between land uses exists, such as can be the case with wind farms in areas with a very low population density dominated by agriculture. But also, renewable energy production can compete with existing land uses or with the acclaimed quality of the landscape. Such competition is not a matter of isolated cases, but can be quite serious. First, real competition existing for example with the production of bio crops is a potential means of producing biomass that can be used in heat-producing ovens, for the production of bio fuels and for the production of bio gas through digesters. Bio crops, however, have not only implications for the replacement of food crops in agricultural areas, they also produce monocultures that have a clear visual impact on the landscape. Real competition can also occur in densely populated areas, where there is simply limited space available . Especially in urban and peri-urban landscapes, usage of the land is intensive and demands for its quality are high. Not only does this imply that it can be too costly to purchase land for developing renewable energy, it can also be highly contested. This brings us to a second point. Renewable energy is both a relatively new feature in our existing landscapes and, due to its visibility and size, can create a serious impact on the landscape. Large scale production of solar energy and wind energy are good examples. Although also prominent in more rural areas, mostly in more densely populated areas there will often be a large amount of people that are experiencing the consequences of such renewable energy production. These consequences can include noise produced by wind turbines or the visual impact of installation. Often associated with the so called NIMBY (not in my back yard) phenomena, these consequences can easily cause societal resistance to renewable energy production close to where people live (Cass 2010; Walker 2010). A good example came from our research into a Dutch context. EXAMPLE: Wind parks in the Netherlands In the northern part of the Netherlands there is an area called the Veenkoloniën (‘Peat Colonies’) where several wind parks are planned. The Veenkoloniën is a peripheral area characterised by a low population density and relatively high economic dependence on state subsidies and unemployment benefits (Commissie Structuurversterking Veenkoloniën, 2001). The wind parks planned in this area, meant to have a total capacity of around 700 MW, contribute to the ambition of the State government to have installed 6000 MW of wind power on land in 2020 (Ministerie Economisch Zaken, Landbouw en Innovatie, 2011). These large projects are managed through the state coordination program top-down. As a result the project was carried out as an isolated, mono-functional energy project. The State made direct agreements with local land owners, mostly farmers, on the allocation of the wind turbines. The State and energy companies (Sijmons and van Dorst, 2012) receive most benefits next to some farmers who gain revenues from the allocation of wind turbines on their land. Linkages with local initiatives, stakeholder interests and economic functions were thus not explicitly considered. As a result, the local population and much of the existing economic fabric were overlooked in the plans. With no direct revenues or benefits, the local population merely faces social costs related to the visibility of the wind turbines, their noise and the intermittent shades. It resulted in a much local resistance to the plans. As our interviews reveal, the people are not against wind energy in general, it’s more that they find it unfair that such an unequal share of the total wind power capacity that is planned for has to be installed in their region. The allocation of the wind parks reinforces their feelings about their region as being disadvantaged. Whereas actually, the innovative wind parks might have provided an economic and social boost to the Veenkoloniën. Out of our interviews a clear suggestion came forward that for doing so a stronger connection between the local potential and the wind parks is necessary It shows that spatial planning is relevant. Figure 2.2: Angry citizens protesting against windfarms in their region 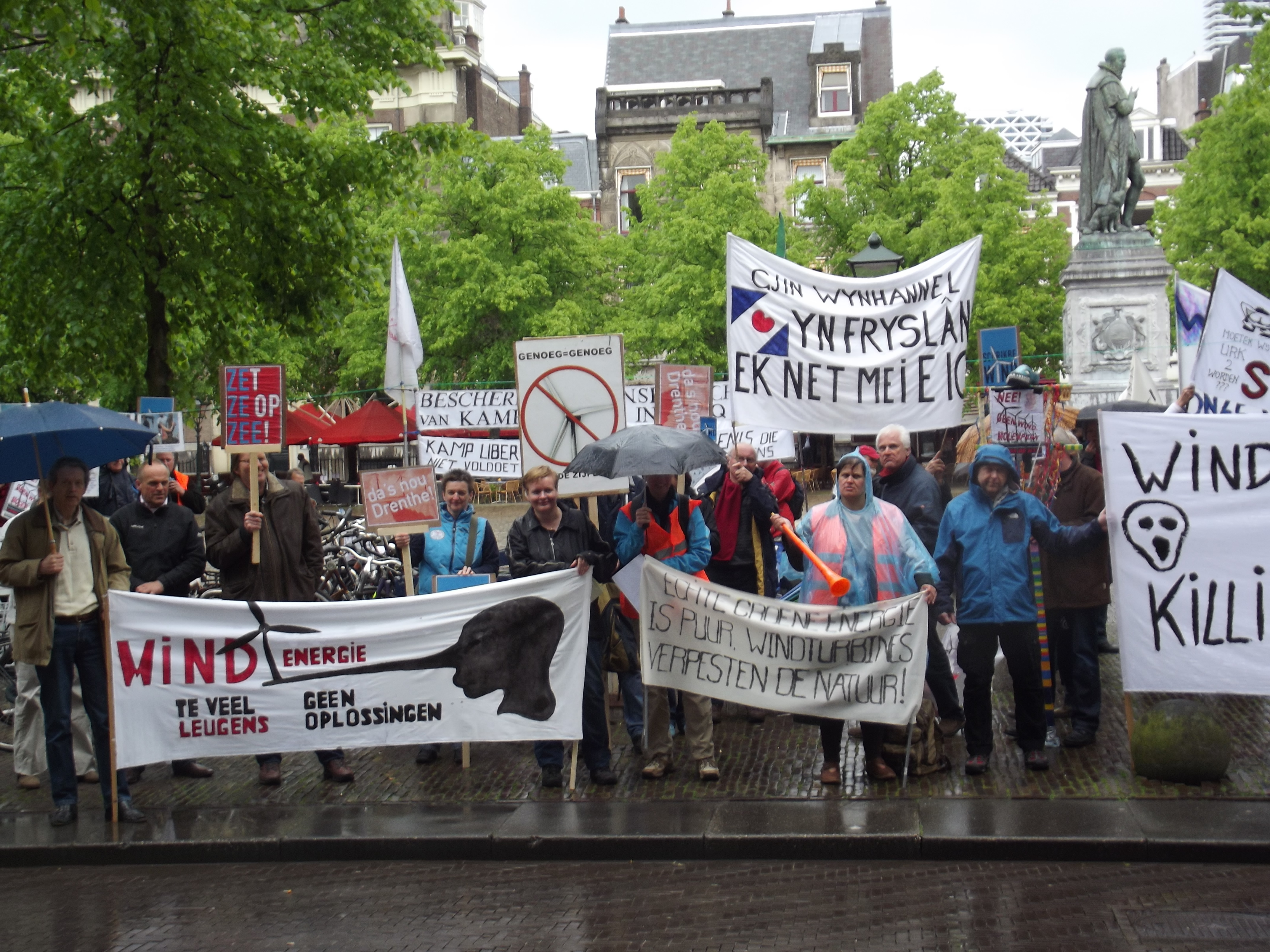 Source: http://www.platformwindenergiedezijpe.nl/home/ A spatial challenge For spatial planners there are now at least three crucial tasks. The first is that they should help governments, companies and civil societies identify which opportunities a specific urban or rural landscape offers for producing renewable energy. That is: what is the ‘low hanging fruit’ that can be harvested without much consequences and which options exist to benefit from locally or regionally available conditions (climate, biomass, solar, geothermal, waste heat, improved isolation of houses when they need to be refurbished anyway, etc.). A second challenge for spatial planners is to help governments, companies and civil societies identify which barriers might exist for a specific urban or rural landscape for producing renewable energy. This will not just involve an identification of the visual impact of renewables of the landscape. It goes much further. On the one hand, there are also needs to identify which existing land uses exist, whether there is competition between land uses and whether and to what degree existing land uses need protection. Examples could be ecological values, built heritage, the spatial configuration of existing infrastructure, a lack of opportunities to transport energy (the energy grid), etc. All can create barriers that are important to take into account. On the other hand, also existing regulations, policies and contracts might prevent the development of renewables. Are regulations allowing for individual people or companies to produce electricity and offer it to the grid, are contracts designed to accommodate such opportunities, is it allowed to use biomass for digesters, etc. It is now an institutional question that also spatial planners should be involved with. Thirdly, spatial planners will also have to help out in designing whatever new energy systems might be gradually created. To begin with, renewable energy production is often more spatially fragmented than the centralised production of fossil fuels in large power plants. It urges for a reconsideration of how energy production and consumption can be interwoven in new energy systems, without reducing the predictability and robustness of these systems. Let us not forget that dependence on for example wind or solar energy can be attractive, but if the weather does not allow it, electricity is hard to produce. On the one hand, this calls for energy systems that have sufficient backup capacity to cope with such shifts in weather, for example through fossil fuels, alternative renewables, buffers or the swift exchange of energy between different regions. It is a call for systems that are highly flexible and robust at the same time. Designing such systems also has a distinct spatial dimension: where will buffers be needed, which regional or international systems can be connected, which alternative resources and power plants do we need? Spatial planners, therefore, have again an important role to play in a shift to a sustainable energy system (Noorman and De Roo, 2011, Stremke and Koh, 2010).
© University of Groningen