What were football fans like in the early 1900s? What happened on a match day and how did the players engage with them? Hear from players and experts.
View transcript
3
In terms of the fans and in terms of players’ connections with fans? Oh yeah, I think we mixed well with the fans. I mean, I know for a fact that a lot of the players, early days when I came here, didn’t have cars. And they used to get the bus and sit with their fans coming into the grounds. Jimmy Walsh even– Jimmy Walsh used to come on his bicycle. Yeah. So just really ordinary members of the public, you found? Yeah. We were well known, obviously, we’ve been in the paper. And the television coverage we did get, which wasn’t a lot, nothing like today, of course.
44.8
And we still were able to go into and do things that we wanted to do without too much hassle. Because we lived in club houses. And there were three of us, Len Chalmers, Colin Appleton, myself lived in Brivale Road, which is Aylestone. And all of us used to get the bus in the morning down to Saffron Lane. Makes you, as you said, mix in with the supporters and all. And of course, you’d mix with them. They’d watch you training and things like that. I don’t think they’re allowed to watch them training now. I’m not sure. No, they’re not. At Belvoir Drive. Well, we used to, as a team, go for a drink after the game.
88.8
And so it’d keep their club spirit, didn’t we? There used to be a cafe opposite the Filbert Street on the corner. I remember it. Went there afterwards. Mixed with all the supporters. Yeah. The supporters were in there, and we knew that team. We used to pin the team up on Friday morning. And we’d go into this cafe, just on the corner of Filbert Street, where we’d have a cup of tea before we went out. And we were sitting like this actually. All around here there were fans sitting there listening. What’s the team? What’s the team? Yeah. Yeah, we were obviously known, well known, but we weren’t exposed to so much publicity and coverage of what they do nowadays.
138.7
They weren’t built up into– [INTERPOSING VOICES] Something like film stars, superstars these days.

There is little reliable information about who were the early fans of British football clubs. Lots of football clubs were formed in the late-nineteenth century, but only a few survived. Most historians believe that the clubs which lasted tended to be sited in slightly more affluent areas, where skilled and semi-skilled workers would have Saturday afternoon off work and would be able to afford to spend money on attending football.

The earliest surviving film of a football match in England is from 1898, at Blackburn Rovers. Most fans watched football hunched together on uncovered terracing. You can see that here.

But we get much more detail about the make-up of early football crowds in England in a remarkable film extract from the Mitchell and Kenyon collection covering a match between Sheffield United and Bury in 1902. The clip begins with a slow scan of a section of the crowd. What can you tell about the people who watched football from this wonderful footage?

Middle class men and women are likely to have watched matches from the seated stands, but there is also some evidence that women may have watched in groups. In my book Red Men (2010), for example, I found newspaper reports of ‘800 colleens…. dainty maids, clad in minks and victorines’ who were in attendance at an Everton match in 1887. 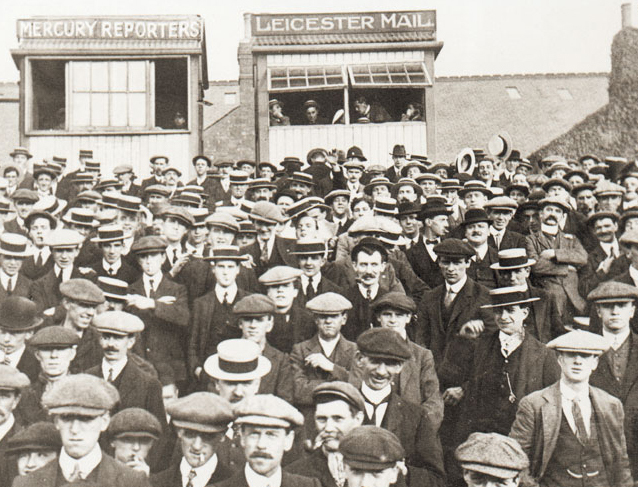 ‘Ladies’ were allowed in free at some clubs at least until 1885. Historian Rob Lewis has argued that women’s attendance at football matches in England in the 1880s and 1890s was a common occurrence, although at a fairly low level of 5–10% of the total crowd.

The biggest day of the season for all fans was the FA Cup final. However, the London press was often less than impressed by the ‘northern hordes’ who came down to the capital for the final, sometimes describing them as ‘barbarians.’ For their part, northern visitors soon expressed concern that they were being exploited by London prices. 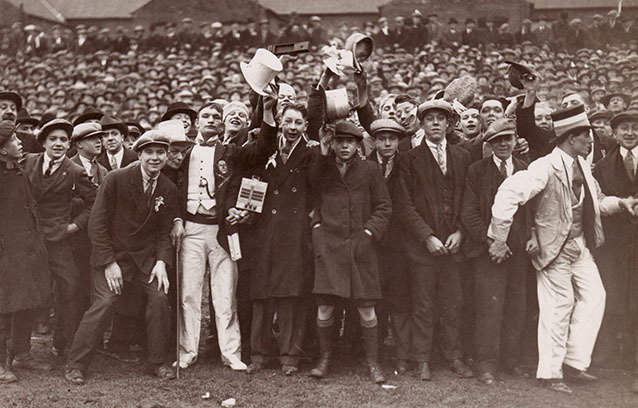 Stepping forward to the 1960s, fan character and behaviour were beginning to change, but the social gap between fans and players was still small. In the video above, we hear from ex-Leicester City players Richie and Howard for the first time: and they begin with some interesting stories of how they mixed with players right up to kick-off.