In this article, Matteo Nanni explains some rules of mensural notation – one of the methods to write down music between the 13th and 16th centuries.
© University of Basel
Early mensural notation is based on the very idea of perfection. In medieval mensural music perfection (perfectio) is a threefold temporal unit that structures the succession of longae and breves. In the music theory around 1270 we find the following explanation in a text that is attributed to Magister Lambertus: ‘It should be considered that the imperfect [longa] does not know how to be made except through the following or preceding breve, because the longa and the brevis [together] (and vice versa) always make one perfection.’ (Lambertus, Ars musica, 71) In the late 13th century the notion of perfection is meant to be the basic rhythmical unit of musical composition: Therefore, Magister Lambertus concludes: ‘If anyone asks whether a mode or a natural song can be made from all imperfect longae – just as it can be made from all perfect longae – the response (with a proof) is: no.’ (Lambertus, Ars musica, 71)

The temporal unit of a perfection can be formed by a single perfect longa (consisting of three breves) or even by a combination of a longa and a brevis or by a combination of a brevis and a longa. In the last two cases the longa becomes imperfect, or – as we say – is imperfected by the following or by the preceding brevis. In that case the longa consists of two breves. Of course a perfection does exist also every time a unit of three breves is constituted as for example by three breves, or by six semi-breves or by two semi-breves and two breves and so on. How can we recognise if a longa is perfect or imperfect in the notational practice? We should keep in mind that the temporal duration always depends on the context. Therefore if a longa stays alone, we are not able to determine if it is perfect or imperfect (except when it stays at the end of a composition). Mensuration rules for single notes:

View Course
However, if there is no further note following the second longa, we cannot determine if it is perfect of imperfect. 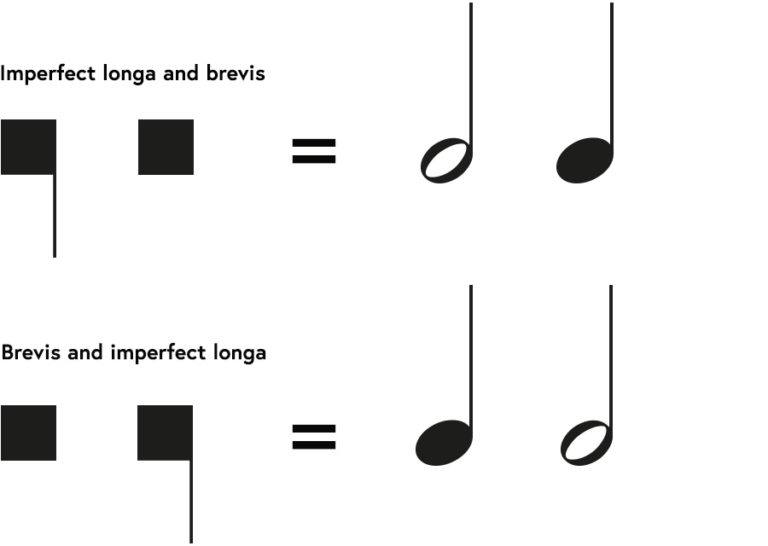 In that case the first brevis will be called recta (proper), the second altera (changed).

The ‘Ars musica’ Attributed to Magister Lambertus/Aristoteles, ed. by Christian Meyer and transl. by Karen Desmond, Burlington 2015.
© University of Basel