We hope that you’re finding the topic of security interesting, as well as a bit of a reality check! We’ve looked at how to develop a threat model and in this step, you’re going to learn about device security.

As you’ve seen in previous steps, planning for security in an IoT solution is essential but it can get complicated very quickly. IoT solutions involve data-collecting devices and cloud services such as storage and analytics, and can involve a lot of personal or sensitive data. These can present soft targets for hackers or those with malicious intent so understanding how a solution can be vulnerable is an integral part of any IoT architecture.

Intel, in their IoT Platform Reference Architecture document refer to asecurity layer in their architecture.

They describe it this way: ‘Robust hardware and software-level protection are essential for ensuring world-class security, which is a foundational IoT principle. Security is more like a process than a product because it depends on evaluating the threat model for specific use cases and addressing each possible threat. A layered security approach is highly recommended since it establishes multiple defense mechanisms against hackers.’

Let’s look more specifically at how this layered approach to security works in an IoT architecture.

When designing a system, it’s important to understand the potential threats to that system, and add appropriate defenses accordingly. The objective of threat modelling is to understand how an attacker might be able to compromise a system and then make sure appropriate responses and repairs are in place.

The movie The Big Short includes a quote which states ‘It ain’t what you don’t know that gets you into trouble. It’s what you know for sure that just ain’t so’. In the context of IoT security, this means that we can get in the most trouble when we confidently assert that something won’t (or will) happen. Part of threat modelling is planning for the things you can’t plan for or anticipate. This might be as radical as taking a server offline or sending technicians to collect devices from the field if there’s a breach. But it could include less dramatic measures to ensure that data is safe and hackers are thwarted.

You should threat model the solution as a whole, and also focus on the following areas:

There are three rules of thumb to keep in mind when building a threat model:

Microsoft’s guidance on threat modelling includes four main areas of focus. Each of these will have specific needs and involve particular threat vectors (ways the area can be attacked).

The diagram below illustrates an IoT architecture with each of these areas designated. The blue arrows indicate paths the data can take through the system. Whilst this looks complex, it’s important in a threat model to understand where your data is coming from and every possible place it can go. Missing just one path can create a serious vulnerability. 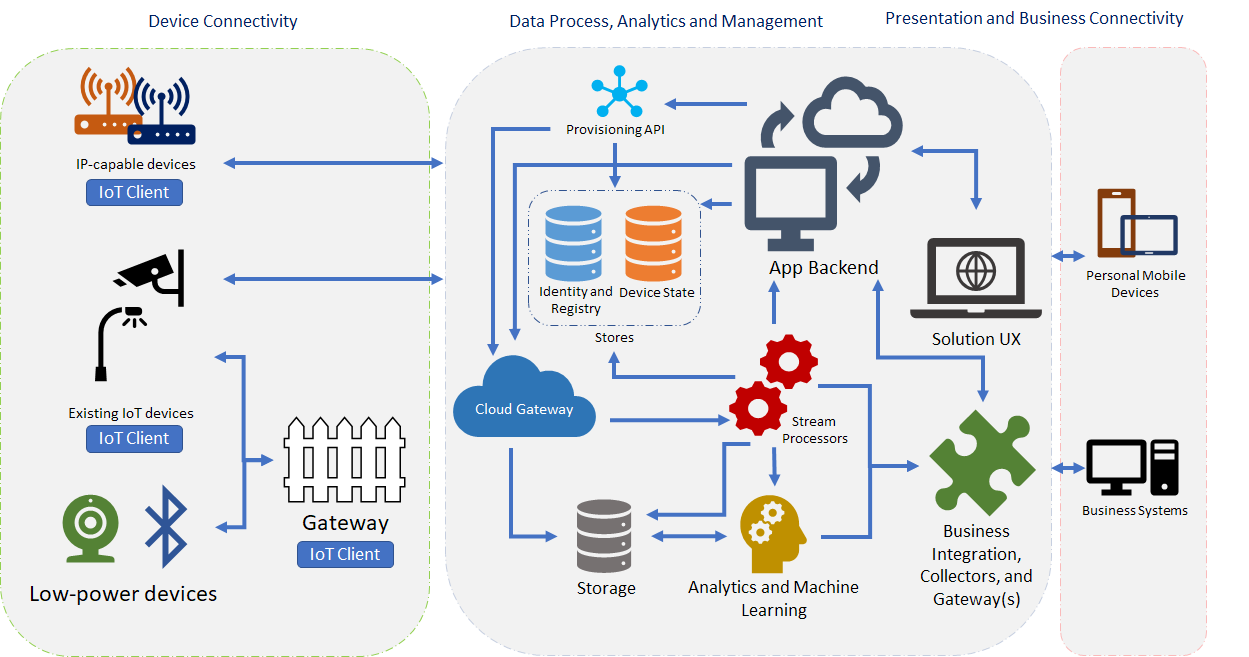 Again, an attack vector is simply a particular way that a hacker or person with malicious intent could compromise your IoT system. Microsoft documentation lists many possible options and we’ll summarise a few of the most important here.

As mentioned above, there are many other attack vectors to consider and a threat model should include mitigations for as many as possible.

As you think about the security of an IoT solution, it can help to break down each aspect of the problem into functional categories. In the threat model we considered above, we saw four areas of focus. We can abstract these further to help us build a threat model. In an article for Network World, author Dean Hamilton echos the guidance that we’ll be looking at in this module. He recommends that IoT architects focus on securing devices, the network, and data. We’ll talk about security in three primary areas: devices, connection and communication, and cloud services. We’ll call this our secure IoT Ecosystem.

In the next three steps, we’ll look at each of these categories in turn.