In this step, we’re going to have a look at the different types of IoT hardware used in IoT solutions. We’ll also see how IoT hardware is being deployed and used in the real world.

The hardware implemented in an IoT solution often includes a network infrastructure that’s used to connect devices. However, some devices could be stand-alone. How would this work? A sensor, for example, could collect temperature data or collect data about how a bridge is being stressed, but not deliver those data immediately to a network database. A technician could check in on a regular schedule and collect the data from the device using an internet-connected tool which then delivers the data to the database.

Some argue that when a device is no longer able to connect to the internet, the ‘internet’ part of IoT no longer applies so the device shouldn’t be considered an IoT device anymore.

Other hardware involved in a broad IoT solution don’t collect data at all but broker communication with other hardware and cloud services. Let’s look at various types of hardware used in IoT solutions and talk about the role they play.

An IP-enabled device is a device that can establish a connection to a network–for many IoT devices, this means the internet–and have a unique identity on that network. IP stands for internet protocol and defines the way messages are delivered over a network. A message in networking terms is a packet of information, and a single packet could deliver part of a text message or a video file. Most data that’s transferred over the internet uses this communication protocol.

In terms of IoT, an IP-enabled device is one that can connect directly to a network (such as the internet) and transmit or receive data. Common examples are home automation devices such as doorbells and thermostats that use an internet connection to communicate with a central server. But industrial-grade IoT devices can be IP-enabled as well; IP-enabled devices require special hardware to enable this functionality.

As you might expect, people deploy IP-enabled devices in scenarios where data needs to be collected, delivered, and analysed in real-time or near real-time. IP-enabled devices enable live connections to the other networked devices or services so data can be transmitted without interaction from a technician.

Data collection isn’t the only reason to use an IP-enabled device. If transmitted data over the internet is particularly risky, your device may not have outbound ability enabled but the device can still receive messages (inbound) from the network so its firmware or software can be updated. Or, it may have the ability to only send status messages but not any data it’s collected.

Whilst it’s possible that a device may have only outbound communication abilities over IP, it’s not typical. When delivering messages, it’s important that the device knows if the receiving node has an error or if messages did not transmit for some reason, so some inbound communication typically is needed. 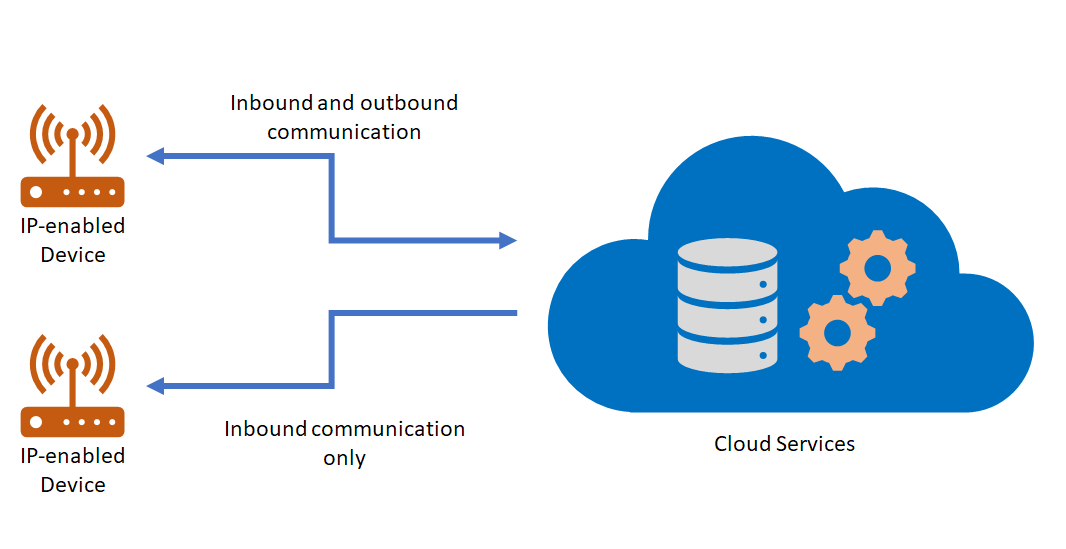 As mentioned above, it’s not necessary for a device to be IP-enabled in order to be a part of an IoT solution. Some devices don’t use IP to connect to other parts of an IoT solution but can use other protocols. These devices don’t connect to the internet as such, but their messages are routed to the internet via other hardware such as a field gateway, which we’ll discuss below.

Devices can use industry-specific protocols such as CoAP5 and OPC, and short-range communication technologies such as Bluetooth and ZigBee to connect to other hardware.

When setting up an internet-connected lock, you may first need to connect the lock to your phone using Bluetooth in order to set up a relationship with a cloud service. Whilst this is a temporary situation, you can imagine a scenario where the device can only connect to a local device using Bluetooth and the secondary device brokers all the communication with the cloud service.

Devices of this type can be useful in scenarios where data from a number of devices needs to be aggregated, cleaned up, and possibly even analysed before being sent to a cloud service. Since IP-enabled devices typically take more resources, low-powered or resource or space-constrained devices can use protocols with lower resource consumption requirements that transmit to a device that doesn’t have these constraints.

This category can be split into sensors and smart sensors:.

The IEEE, in Towards a definition of the Internet of Things (IoT), writes this about sensors:

‘Sensors are one of the key building blocks of IoT. As ubiquitous systems, they can be deployed everywhere–from military battlefields to vineyards and redwoods and on the Golden Gate Bridge. They can also be implanted under human skin, in a purse or on a T-shirt. Some can be as small as four millimetres in size, but the data they collect can be received hundreds of miles away. They complement human senses and have become indispensable in a large number of industries, from healthcare to construction. Sensors have a key advantage in that they can anticipate human needs based on information collected about their context. Their intelligence, ‘multiplied’ by numerous networks, allows them not only to report about the external environment but also to take action without human intervention.’

Within an intelligent networked system, sensors perform the functions of input devices. They serve as ‘eyes’, collecting information about their environment.

‘We can define a sensor, then, as a device that collects a specific type of data about the physical environment. As IoT as technology grows, the list of available sensors most likely will grow with it. There also are communities that will help you build your own sensors if the one you need doesn’t exist.’

A smart sensor according to IoT Agenda is ‘a device that takes input from the physical environment and uses built-in compute resources to perform predefined functions upon detection of specific input and then process data before passing it on’. In other words, the device itself processes the data to some degree before sending it to the next node in the IoT architecture.

Sensors of both types can be embedded on other devices that manage communication with a network or stand-alone and handle all the necessary functions needed to collect and communicate data.

Sensors that can collect data on a wide variety of things are actively being developed. Intel has compiled a list of some sensors currently available. Examples include:

Sensors are used whenever a discrete bit of information needs to be collected about something in the physical environment.

A field gateway is a specialised device-appliance or general-purpose software that acts as a communication enabler and, potentially, as a local device control system and device data processing hub. A field gateway can perform local processing and control functions toward the devices; on the other side, it can filter or aggregate the device telemetry and thus reduce the amount of data being transferred to the cloud back-end.

A field gateway’s scope includes the field gateway itself and all devices that are attached to it. As the name implies, field gateways act outside dedicated data processing facilities and are usually collocated with the devices.

A field gateway is different from a mere traffic router in that it has an active role in managing access and information flow. It’s an application-addressed entity and network connection or session terminal. For example, gateways in this context may assist in device provisioning, data filtering, batching and aggregation, buffering of data, protocol translation, and event rules processing. NAT devices or firewalls, in contrast, don’t qualify as field gateways since they are not explicit connection or session terminals, but rather route (or deny) connections or sessions made through them.

This is a brief introduction to the growing world of IoT devices. The devices you’ll need for a solution will depend largely on what data you’re interested in collecting, how you want to work with that data, and the devices that are available on the market or that you have the capability of building. In the next step, we’ll take a look at IoT Software.