The Notitia Dignitatum: an extraordinary document

The Notitia Dignitatum
© Newcastle University
The Notitia Dignitatum is an extraordinary document that survives in a number of manuscript copies from the Middle Ages. This document lists the offices and social ranking of the civil and military branches of the Roman imperial government in the Eastern and Western Empires. There is considerable debate as to when it was actually composed, and many scholars believe it dates to c. AD 425, which is actually after the end of Roman Britain. We do not understand the purpose of the Notitia. Was it an index or directory, like a phonebook, for a functionary in the imperial court? Was it part of normal record-keeping, or did it serve some other purpose? The Notitia is a complex document and, without understanding its purpose, it can be difficult to assess the evidence it contains. Regardless of these uncertainties, many scholars have used the Notitia to reconstruct and understand the organization and distribution of the late Roman army. 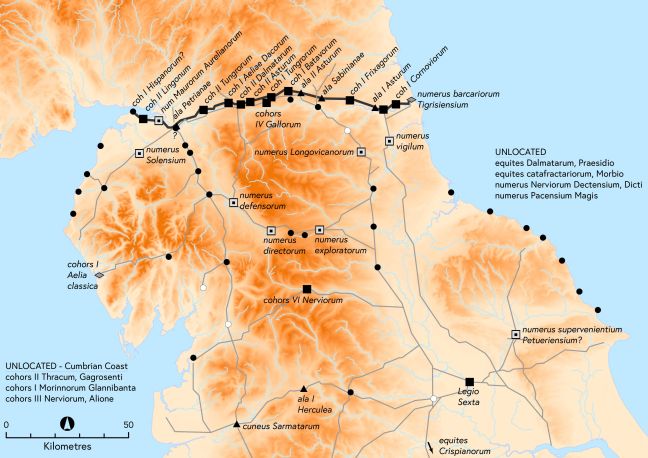 Larger version of the map In the downloads section you will find a Notitia Dignitatum table and map. The table allows you to see the line of the Notitia that notes the commander of a unit (named) with its base also named. There are some errors, noted by previous scholars, and these have been indicated with ‘lacuna’. Where the placename can be associated with a known Roman fort, this is listed. Where the place is uncertain, possible locations are also noted.

View Course
The confirmed units have been mapped, but note that there are some locations, such as Catterick, where there is archaeological evidence for occupation but no mention in the Notitia Dignitatum. This highlights the complexities of using documentary and archaeological sources; it may be that Catterick was garrisoned by part of a unit whose base was elsewhere, for example York. Or perhaps the Notitia is listing the units in residence in the year 405, while the archaeological dating cannot be so precise. This uncertainty of dating also leads us to ask a much bigger question. If Roman Britain is generally agreed to have come to an end around 410, and the Notitia is thought to have been compiled around 425, then are the lists for Britain current for 425 or do they simply record the last known organization and status of the offices prior to 410? While our understanding of the Notitia is certainly imperfect and there are still many questions left unresolved about this document, it does allow a tentative identification of the military situation in the northern frontier in the late 4th and early 5th centuries.
© Newcastle University