Crystal lattices, trapped charges and spinning electrons. They all form a part of the ESR dating method.
View transcript
7.6
This video is just to show that the numerical age is just the tip of the iceberg. And an age is actually the result of a long and complex analytical procedure. So we are going to show you here how we date a sample with the ESR method. The goal of this procedure is to try to estimate the radiation dose absorbed by the enamel layer during the geological time. So since the death of the organism. A few keys here to understand what I’m going to mention later on, is that ESR stands for Electron Spin Resonance, which is a spectroscopic analytical technique that looks at paramagnetic properties of materials.
59.1
So first we’re going to show you the standard procedure in ESR dating of fossil teeth. First we try to cut a piece of the tooth, and then we extract the different dental tissues. The tooth is made by several dental tissues– the enamel, but also dentine, and sometimes, the cement. So we need to extract them.
85.9
And then we need to clean the enamel layer on both sides using a dentist’s drill. We measure the thickness of the layer before and after cleaning. Once this is done, we powder the enamel.
107.3
And we sieve it below 200 micrometres. So at the end of the sample preparation, we have each dental tissue separated in a different vial, and the enamel powder. So the enamel powder is divided in various aliquots, which are subsamples of the same weight. The samples are carefully weighed in small tubes before irradiation. Each aliquot is going to be irradiated at increasing dose. The idea is to understand the behaviour of the sample with the radiation. So after the radiation, the aliquots are carefully weighed in quartz tubes for ESR measurements. Each tube is placed in a resonator. As you can see here, this is a small metal box that is located between the two magnets.
159.2
So a microwave is produced by a bridge and sent to the resonator where the magnets produce a magnetic field. For each tube, we record an ESR signal. This is the radiation- induced ESR signal that is measured for one tube. The intensity of the signal is directly dependent on the dose that has been absorbed by the sample. However, there is also a more advanced procedure that has been specifically designed to minimise the damage caused to the teeth. This is essential when we work on highly valuable samples like human fossil teeth.
201.6
You can see here an example on this fossil mandible, where we took a piece of enamel from this tooth that we analysed with ESR and uranium series, and then we glued it back to the tooth in its original position. There is no visible damage. So the procedure here is slightly different, compared with the standard approach. Once we receive the tooth, we take a few pictures of it, and then extract a piece of enamel. We then, again, must clean the enamel in order to remove any kind of contamination from the adjacent dental tissues. Once we have a piece of enamel, we measure its thickness.
247.3
Then we must prepare a sample holder for the ESR measurements. So we use a teflon holder in which we mount a piece of parafilm.
258.9
We leave it in the oven for a few minutes in order to slightly melt it. And once the parafilm is cooler, it becomes harder and saves the shape of the fragment. The objective of this procedure is to make sure that the fragment will be systematically measured in the exact same position. Then the sample is fixed at the bottom of a quartz tube and measured. The main difference here is that we have only one fragment, so one aliquot. Which means that we need to successively measure the fragment and then irradiate it. This is a single aliquot procedure.
292.6
So with the enamel powder, we use the multiple aliquot additive dose method, which consists of dividing the powder in various subsamples that are going to be irradiated, increasing those values. This is impossible with enamel fragment, so we use the single aliquot procedure, which consists of successively measuring with ESR and irradiating the same fragment.

Crystal lattices, trapped charges and spinning electrons. They all form a part of the ESR dating method.

Trapped charge refers to the behaviour of the electrons within the material being tested. Here comes the science…

Crystalline materials have their atoms arranged in an ordered structure called a lattice. The structure of these lattices determines many of the physical properties of the material. The lattice has imperfections, or defects, where the arrangement of the molecules is not perfect – atoms may be missing in places, for example, creating holes in the lattice. The surrounding structure is strong enough that this doesn’t cause any collapsing of the crystalline structure.

These defects often have an electric charge. If it’s positive, we can trap negatively charged electrons. When the mineral is formed, all the electrons are where they belong: whizzing around atoms. However, with radioactive irradiation (like the one we use for killing off cancer cells in the hospital), electrons can be removed from the atoms and go on a journey through the crystal lattice. Some of the electrons get trapped at these defects. Here we can measure them with ESR. Now, the number of trapped electrons is proportional to the number of defects, the strength of the radioactivity, and time (= the age of the sample).

So how can we get to the age of the tooth?

We have to measure two things: firstly, all radioactive sources in the tooth and its environment – that is the dose rate. Then we do the same in the laboratory that nature did in the past: we artificially age the tooth by irradiating the tooth at the defined doses of gamma rays (as we do in the hospital with the cancer cells). That tells us the dose that the natural signal presents – the total dose of radiation absorbed by the tooth since it has been buried in sediment. The age results by simply dividing the dose over the dose rate – representing the duration of the exposure of the tooth to natural radioactivity.

Usually, the ESR measurements are carried out on enamel powders. Of course, we can’t take the enamel from rare fossil teeth and turn it to powder. Rainer Grün developed a technique where we separate a cracked piece of tooth enamel, measure the piece and then restore it to the tooth from which it was taken. You’ll see this at work in the video we have put together for you. The tooth enamel fragment is then measured. The orientation of the fragment has an effect on the ESR signal, so the fragment is rotated during measurement. It’s more complicated and time consuming than measuring powder.

It may help to use another analogy – this time we’ll use a bathtub.

Similarly, if we can determine the total dose of radiation in the tooth (the volume of water in the bathtub), and the dose rate (the flow of water into the bathtub) – then we can calculate how long the tooth has been exposed to natural radioactivity.

Of course, we are making some assumptions with our bathtub: 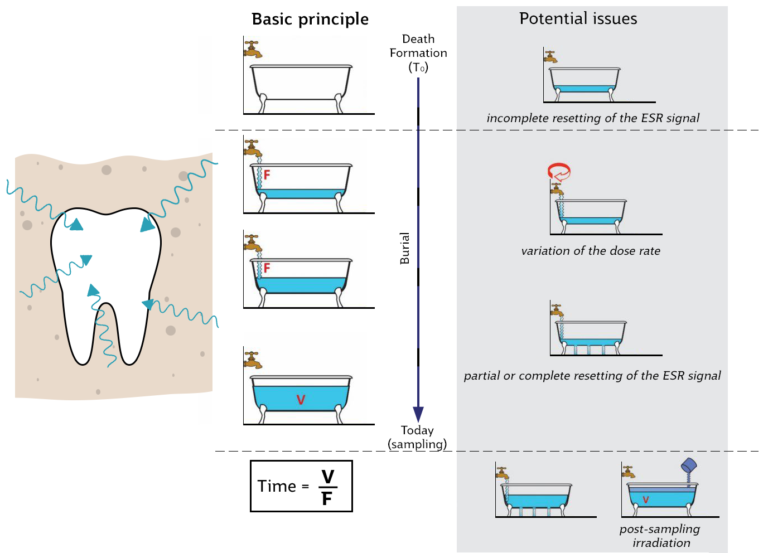 The calculation of the dose rate is actually quite complicated. The vast majority of radioactivity in nature derives from three elements: uranium, thorium and potassium (we use the radioactive isotope K-40 for dating as well, but this is another story). The challenge here is that the concentrations of radioactive elements within the sample are usually very different from its surroundings – which means that we need to assess the internal dose rate and the external dose rate separately.

The external dose rate needs to be calculated from any sediment attached to the fossil, along with samples from the site where the fossil was located, which is not always possible. Even the fact that the teeth may be located within their original jaw adds complications, as the jawbone will both shield the tooth from environmental radiation – and add its own radiation to the tooth. In many cases we are forced to reconstruct this external dose rate from museum samples, which adds the possibility of very large errors.

The internal dose rate is calculated using the same principles as U-series dating – the equilibrium between the uranium and the thorium. And with that we inherit the same challenges that require us to model the uranium uptake of the fossil. We do this by combining ESR and U-series dating results on the tooth. Both dating methods depend on U-uptake, but to a different extent. As we know from school, if we want to solve for two unknowns, we need two independent equations. Here the two unknowns are the age of the sample and the way the uranium migrates into the sample (that is described by a one-parameter diffusion equation). By putting everything together we can solve for the age and the diffusion parameter. Does that sound complicated? It should – the equations run over several pages. Don’t worry, we have computer programs that do the hard math.

We asked Mathieu to give us a quick summary of the process of ESR dating.

Of course, the dates only make sense if all our assumptions are correct. This is tricky when we work, for example, on museum material to reconstruct the environmental radioactivity of the tooth. Does it really come close to the original environment of the tooth?

You can see once again that the science of the dating method is asking a lot of questions and posing many challenges. Our theories raise questions with implications that we understand and acknowledge – but are not always able to answer (yet).

In the laboratory video we show you the preparation of two samples. One is a powdered ancient horse tooth, and the other is a piece of enamel from a human tooth. You will see how Mathieu prepares both samples and uses the ESR spectrometer to measure them.

Well, you made it through a lot of science here. As you probably suspect, there is a lot more underpinning the process and the modelling.

As we said when we looked at the limitations of dating methods, when it comes to the general reliability of dating methods other than radiocarbon, we still have a long way to go. But that’s the theory behind ESR dating, and where we are at with its application.

What do you think of the ESR dating method?

Have any questions for Rainer or Mathieu?