In 2003 a joint Australian-Indonesian team looking for evidence of the migration of *Homo sapiens* into Australia discovered something unexpected.

In 2003 a joint Australian-Indonesian team looking for evidence of the migration of Homo sapiens into Australia discovered something unexpected. The island of Flores is part of the Sunda Arc of islands, a region known for its biodiversity – due to the limited transfer of flora and fauna between islands that were formed by volcanic activity and separated by deepwater straits (Lohman et al., 2011; Tänzler et al., 2016). You will probably have heard of the Komodo dragon, an example of the localised species in this region. The island of Flores has yielded some fascinating animal fossils, such as giant stork, the medium size elephant-like creature known as Stegodon florensis (van den Bergh et al., 2014), and an even smaller sub-species, Stegodon florensis insularis that is believed to have disappeared around 17,000 years ago (van den Bergh et al., 2008).

Liang Bua is a limestone cave located in the west of Flores, 14 kilometres northwest of the town of Ruteng. The cave is at the base of the southern slope of a fertile valley. Many animal remains have been found in the sediment of this cave. You can find an interesting description of the site and its diverse range of animals and birds by Hanneke Meijer on her guest blog at Scientific American. The cave was originally an underground chamber that has gradually been exposed by the action of a river in the valley (Aiello, 2010). You may remember from the beginning of this course that two of the important aims of the story of evolution are: Current perspectives of early human dispersal place the migration of Homo sapiens into southwest Asia and Australia at about 50,000 to 55,000 years ago (O’Connell et al., 2018). In 2003, a joint Australian-Indonesian archaeological team was in Indonesia searching for evidence of early migration of H. sapiens into the region. Instead, at Liang Bua cave on Flores, they discovered a new species (Brown et al., 2004). 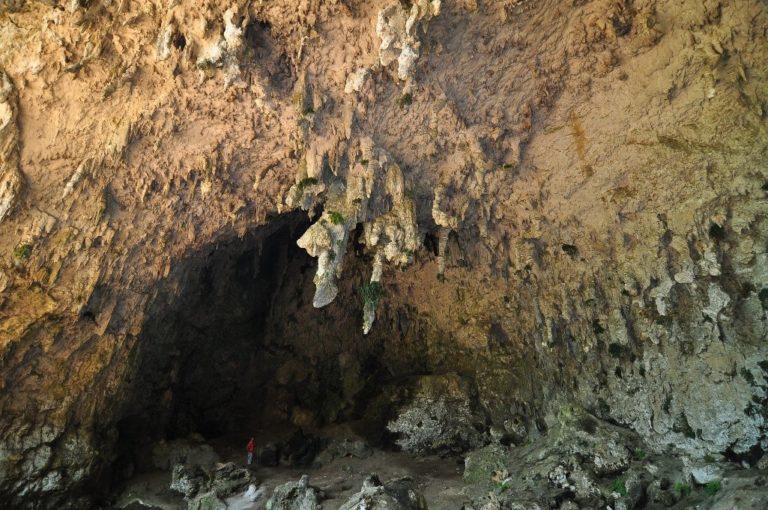 View Course
You can see straight away that Liang Bua presents a much different story than what you have learned about the site at Jebel Irhoud. Liang Bua was not an accidental discovery by a mining operation. Nor was it a series of digs carried out in the 1960s using older, less-developed archaeological processes. This was a deliberate, precise and archaeologically-sound project that was carried out by experts. They knew the theories, they knew the science, they knew the processes, they knew the practices. What they didn’t know, was what they were going to find.

What they uncovered was the partial skeleton of an adult female that stood one metre tall, with a tiny skull (and therefore brain), that made stone tools. Its features did not fit within the taxonomy of any known hominin species, so they assigned it a new one – Homo floresiensis (Brown et al., 2004). More affectionately, it became known as the ‘Hobbit’, because of its tiny size. But the size of H. floresiensis was not the only startling news reported by the team. They also reported a date of approximately 18,000 years ago (Brown et al., 2004). This would mean that this primitive, unknown species had been still living on the island of Flores long after Homo sapiens first appeared in southwest Asia – making it the longest survivor of any other hominin species than modern humans.

Compare this site with what you have already learned about Jebel Irhoud. Then think about what you have also learned about the principles and processes of dating human fossils. Can you see how the different histories of these two sites may have an effect on the dating processes? Please select the comments link and post your thoughts.