Explaining the concept and levels of IS/ICT maturity model. 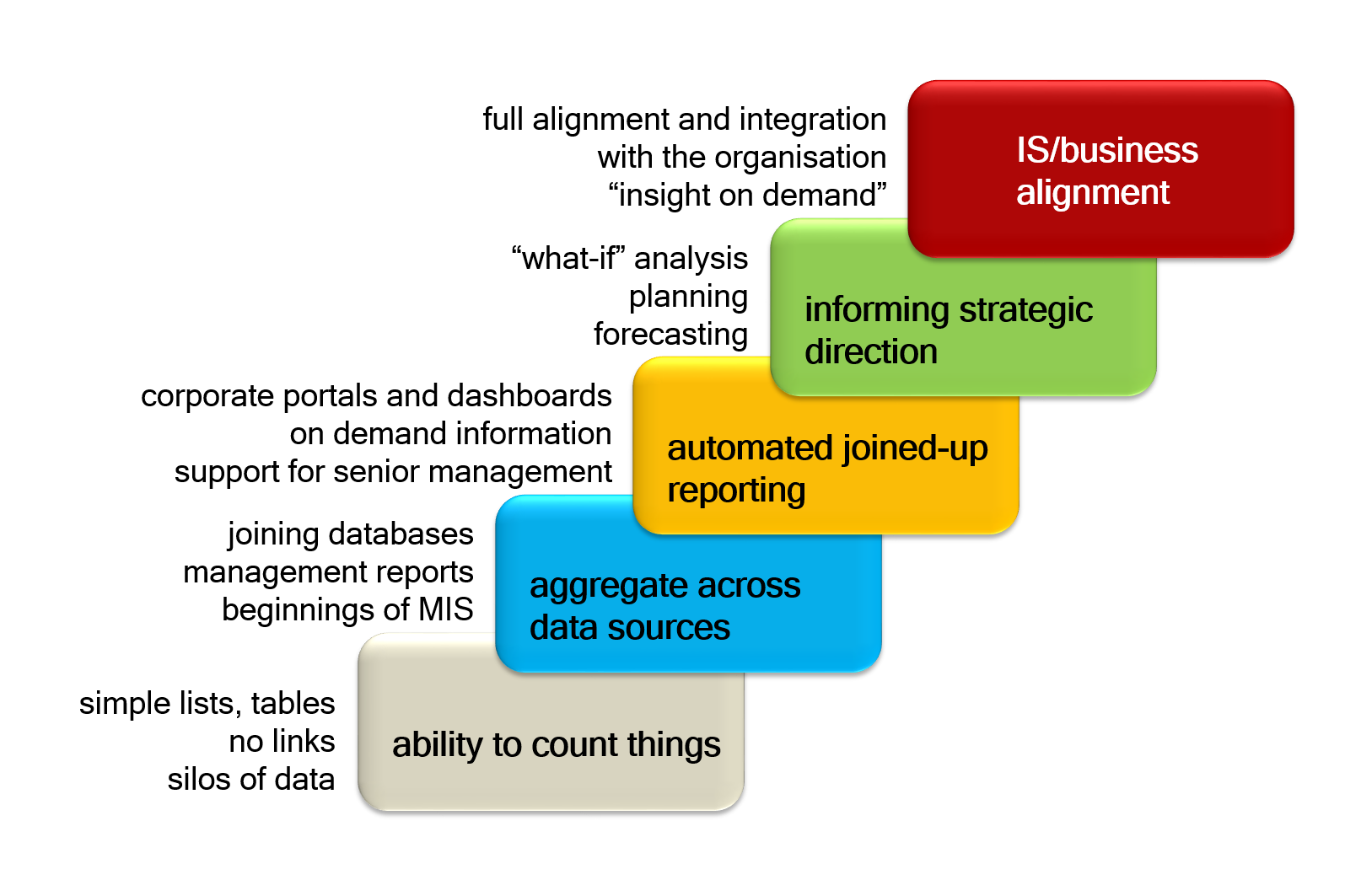 You may have seen variants of the so called ‘maturity model’ or ‘maturity framework’ before. What is important however, is that the maturity models were originally developed in the IS arena, which may the reason that they do not work very well in some other areas, such as knowledge management. The version of the model presented here is informed partly by the literature and also by some implementation experience. The first step that you try to do when developing an information system for an organisation is simply the ability to count things. While this sounds more than trivial, it is often not so simple to actually achieve it in reality. There is nothing that we would call complex here, but it can be complicated. The main problem that often occurs is the difficulty of accessing the data and what can make it complicated is that, although each of the simple lists you want are simple in themselves, there can be many of them. So we will have lists, such as how many bicycles we have manufactured, how many of these are red, green, etc., how many tyres and lamps were faulty and so on. The outcome is what we could call ‘silos of data’ that are usually meaningful only to those who work very close to the origin of the data. This first level of the maturity model can be associated with the EDP level of information systems.Once we are able to capture all the data and organise them into lists, we start to aggregate them across different data sources. You can probably find links to what I have said about the development of databases in organisations – this is not surprising, as the databases are important ingredients of larger information systems. So here we try to bring together data from various databases for the purpose of producing reports for management, using both data marts or data warehouses. The quality and usefulness of the reports produced by the IS is an important criterion when choosing an IS. This second level of the maturity model can be associated with the beginning of the MIS – but this is only the first step, which would usually only satisfy the operational management needs, so there is still a lot to be covered within the MIS realm.Once we have figured out how to join databases, we can automate some of these processes enabling automatic generation of reports. The point is that we cannot know in advance what sort of information the managers may need brought together in a report in the future, so we need to design the system in a way that it enables on-demand information. This is the level of maturity at which we would expect some dashboards to appear, usually first these would be separate dashboards e.g. for business intelligence, for production, for sales, but eventually these should come together into a single corporate portal. This also means that here we can achieve a higher level overview of the organisational processes meaning that the senior management is also getting some support – which is another step on the MIS scale.The next maturity level is in essence all about taking the ‘on-demand information’ aspect to a much higher level. At level 3 we could get on-demand display of what is currently there, in level 4 we expect to get answers to ‘what it could be’. This is called ‘what-if’ analysis, and essentially means playing with scenarios. To we ask the machine what it would mean for our finances if we closed down a particular outlet store. The machine will then recalculate not only what sales we are losing but also how much we can save by firing the people who work there, and in better cases taking into account the arrangements that the particular workers have in their contracts, electricity bills, etc. However, if we used that outlet store also as a warehouse and were delivering things from there to other stores, the logistics costs would also be recalculated. There are very useful functions for planning and forecasting as long as we don’t expect the IS to know the future. This is the highest level of MIS and can be considered as the beginning of SIS.The highest level of the maturity model would be when a full alignment is achieved between the business and the IS. Those who popularise these models use terms such as ‘insight on demand’. But I admit that I have never seen an IS at level 5 maturity – the highest I have seen was level 4 and even that is rare so I am not entirely sure what it would look like. I am pretty sure that it would need some AI in there i.e. a machine learning algorithm that could figure out what information you need based on what you are doing. I also imagine that we would need knowledge-based systems working at this level as well as some sort of next-generation data mining tool. I also believe that this level would not be a purely technological one, that it would be an interaction of IS and human experts which is what we have in knowledge-based systems anyway.
© University of Strathclyde

Hi there! We hope you're enjoying our article: IS/ICT Maturity model
This article is part of our course: Understanding Information and Technology Today