Different types of communication in MPI

There are two criteria by which we can divide the types of communication in MPI.

The second criteria and perhaps more complex is by defining the type of communication into blocking and non blocking types. A blocking routine returns only when the operation has completed. This means blocking implies that if we send a message, we can’t proceed to the next steps until the receiver actually returns us information that it has received the message.

The non blocking communication is more complicated than the simpler blocking counterpart. In this case it returns immediately and allows the sub-program to perform other work. It differs from the blocking communication in a way that if we send something to the receiver, we can execute some other tasks in between and after some time, we can check if the receiver has actually returned the information, i.e., it has received the message, or everything is OK. Many real applications usually employ this type of communication. 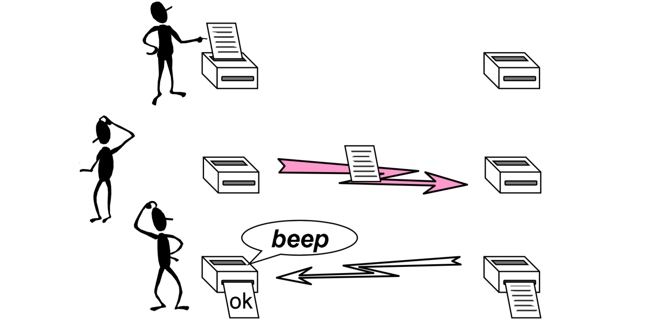 In order to send a message with Point-to-Point Communication, we use the function

We will now see what arguments this routine actually needs.

These are the arguments that are the most important information the MPI environment needs in order to know what data is sent and to whom.

As we saw the sender needs a function to send a message and obviously the receiver has to call the receive function. This means that for the communication to work, we need two processes and two ranks. So, one will call the MPI_Send function and the other will similarly call MPI_Recv to receive. To be able to receive, we use the function

The arguments needed by this function are similar to the MPI_Send function.

We will learn more about this status structure in the coming weeks.

So, let’s go through an example to understand again the prerequisites for this communication to work efficiently and how this would actually work in a code.

Here, the left is the sender and the right is the receiver. Let’s suppose that the sender would like to send this buffer array that has n floats over to some other process. For this, it calls the MPI_Send routine function. As we already know, the first one is the pointer to the data. So, this is the send buffer. Then it needs to specify the number of data. In this case, it is n. The next argument is MPI_FLOAT, and we need to make sure that this data matches with the one mentioned earlier. As we previously discussed, this is the MPI data type that the environment defines, but it has to match with this one, otherwise the communication will not work. Another thing we need to keep in mind is that this data type has to match with the receiver. So, we have to be careful when we write these functions that all of these have to match. Now, the receiver has to call the receiver function with the same data type. Here it has to first define an array where it would like to receive this data, the receive buffer. The communicator, of course, has to be the same because they are bound in the same program. But we usually use the MPI_COMM_WORLD communicator. The next important part is that the tag has to match. And finally, the type of the message or type of the data has to match.