Find out more
Home / Healthcare & Medicine / Anxiety & Depression / Identifying and Responding to Domestic Violence and Abuse (DVA) in Pregnancy / What is domestic violence and abuse and how common is it?

What is domestic violence and abuse and how common is it?

We will focus on the definitions and prevalence of DVA.
© Coventry University. CC BY-NC 4.0

Different agencies and governments have different definitions of domestic violence and abuse (DVA). We will focus on three here before looking at the prevalence of DVA generally as well as during pregnancy.

The new statutory definition provides that domestic abuse occurs between two people if they are both over 16, ‘personally connected’ and the behaviour is defined as abusive.
(GOV.UK, 2020)

The Bill defines behaviour as abusive if it consists of any of the following:
Furthermore, it does not matter whether the behaviour consists of a single incident or a course of conduct.

The US Centers for Disease Control and Prevention (CDC) definition

The CDC definition refers to intimate partner violence (IPV) rather than DVA:

Intimate partner violence (IPV) is abuse or aggression that occurs in a romantic relationship. ‘Intimate partner’ refers to both current and former spouses and dating partners. IPV can vary in how often it happens and how severe it is. It can range from one episode of violence that could have lasting impact, to chronic and severe episodes over multiple years.
(CDC, 2020)

The CDC includes the following types of abusive behaviours in its definition of intimate partner violence:

When a person hurts or tries to hurt a partner by hitting, kicking, or using another type of physical force.

Forcing or attempting to force a partner to take part in a sex act, sexual touching, or a non-physical sexual event (such as sexting) when the partner does not or cannot consent.

A pattern of repeated, unwanted attention and contact by a partner that causes fear or concern for one’s own safety or the safety of someone close to the victim.

The use of verbal and non-verbal communication with the intent to harm another person mentally or emotionally and/or to exert control over another person.

The World Health Organization (WHO) definition

As with the CDC, the WHO definition refers to IPV rather than DVA:

Self-reported experience of one or more acts of physical and/or sexual violence by a current or former partner since the age of 15 years.
(WHO et al., 2013)

Being slapped, pushed, shoved, hit with a fist, kicked, dragged, beaten, choked, burnt, having something thrown at you, and/or being threatened and/or having a weapon (gun, knife, etc.) used on you.

Prevalence is typically based on exposure in the last 12 months and on rates of lifetime experience. The UK Office for National Statistics (2018) estimates that 2 million adults aged 16 to 59 years in England and Wales experienced DVA in the last year, equivalent to 1.3 million women (7.9% of the overall population) and 695,000 men (4.2% of the overall population). In terms of lifetime exposure (for US population), we draw on CDC data.

Select the image to expand it.
Adapted from the CDC, 2020

Taking a more global perspective and integrating women’s experiences of sexual as well as domestic abuse, the WHO states that one in three women across the world is subjected to domestic violence and abuse from a partner or ex-partner or sexual violence from a non-partner (World Health Organization et al., 2013). 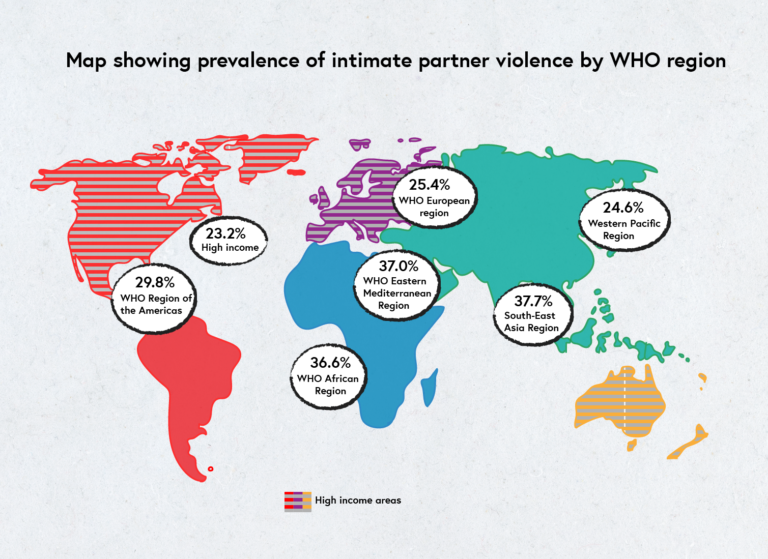 Select the image to expand it.

Prevalence of DVA during pregnancy

A meta-analysis involving 19 African studies by Shamu et al., 2011 yielded an overall prevalence of 15% for any DVA during pregnancy. While there is considerable variation in prevalence rates across studies and parts of the world, taken together, this data points to the high likelihood of professionals in maternity services, and in other settings where pregnant individuals seek healthcare, encountering women who have recent exposure to DVA. We have used a conservative estimate of 1 in 10 to communicate the numbers of pregnant women around the world exposed to DVA.