The Impact of Domestic Violence and Abuse on Pregnancy

This article discusses the impacts of domestic abuse and abuse against pregnant women. The effects are wide ranging and long lasting.
© Coventry University. CC BY-NC 4.0 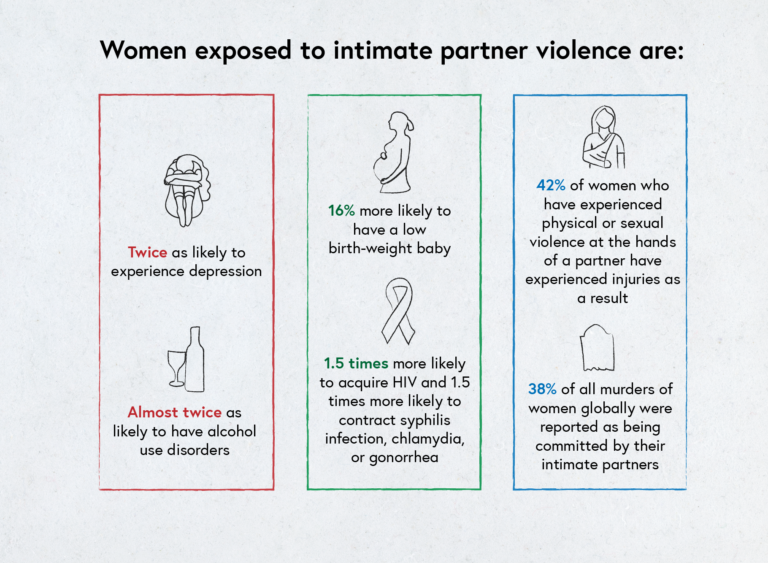 Adapted from a graphic produced by WHO based on a 2013 report entitled ‘Global and regional estimates of violence against women: Prevalence and health effects of intimate partner violence and non-partner sexual violence’ by the World Health Organization et al., 2013.

Domestic violence and abuse (DVA) in pregnancy is linked to a wide range of negative outcomes.

In the extreme, DVA in childbearing can be a heightened risk factor for maternal death (McFarlane et al., 2002), along with homicide and suicide (Campbell et al., 2003). Women experiencing DVA during pregnancy are vulnerable to all the same mental and physical health issues that affect women generally (as depicted in the image above). Some of these effects have particular relevance and pose certain risks during pregnancy (as depicted in the image below).

In order to cope with the shame, stress and suffering caused by DVA, some pregnant women may self-medicate, or use tobacco, alcohol and other drugs (Campbell, 2002). Perpetrators of DVA during pregnancy may physically target the abdomen, causing several negative reproductive health outcomes (Bacchus et al., 2001; El Kady et al., 2005). At this time, perpetrators can also target the buttocks, breasts, genitals, head, neck and other extremities (Thananowan & Heidrich, 2008).

Select the image to expand it.

Pregnant people may also experience delays in their maternity care due to being prevented from leaving the house or missing appointments due to injury (Humphreys & Campbell, 2011).

There is an increased risk of miscarriage and abortion for those experiencing DVA during pregnancy (Fanslow et al., 2008; Pallitto et al., 2005). DVA during pregnancy also links to a variety of other negative reproductive outcomes such as intrauterine growth retardation along with preterm labour and birth, leading to low birth weight and other neonatal risks (Altarac & Strobino, 2002).

The Janssen study involving a survey of over 4000 Canadians who gave birth between 1999 and 2000 did not find fear of a partner in the absence of physical violence to be associated with an elevated risk of adverse pregnancy outcomes.

A 2016 review drew together findings from 50 studies in one meta-analysis; it found a nearly two‐fold increase in the odds of delivering a preterm infant among victims of DVA during pregnancy, compared with women who were not exposed.

Similarly, the odds of low birth weight were doubled where DVA was present during pregnancy. The association with being small for gestational age was less pronounced and only marginally significant, although fewer studies were available for the meta‐analysis (Donovan et al., 2016).

The stress experienced by the victim of DVA during pregnancy can have long-term negative impacts upon the infant’s anxiety levels, along with their brain and behavioural development (Bergman et al., 2007; O’Connor et al., 2002).

In a review of studies examining DVA and perinatal mental disorders by Howard and colleagues (2013), pooled estimates from longitudinal studies suggested a threefold increase in the odds of high levels of depressive symptoms in the postnatal period after having experienced DVA during pregnancy. Increased odds of having experienced DVA among women with high levels of depressive, anxiety, and PTSD symptoms in the antenatal and postnatal periods were consistently reported in cross-sectional studies. These findings invoke the literature on the relationship between postnatal depression and difficulties caring for a newborn baby and indeed the long-term problems associated with thwarted attachment between a mother and her child. Indeed, research has demonstrated how perpetrators target the bonding process between mother and child (Humphreys et al., 2006).

The continuance of abuse in the postnatal phase also marks the beginning of babies and young children being at risk of experiencing (formerly, the term ‘witnessing’) the abuse of their mothers and of becoming victims of child abuse.

How might this information about the impacts of domestic violence and abuse influence your practice in the future?