Skip main navigation
Home / IT & Computer Science / Coding & Programming / Introduction to Programming with Scratch / What is selection in programming?

What is selection in programming?

In programming, you can use conditions to determine whether or not to run a section of code. This is known as selection – read more here.

In programming, selection allows you to choose whether or not to run a section of code. It opens up a wide range of possibilities as it means the commands that are or aren’t run can be selected based on a condition being met. This could be some input from a user, or a sensor, for example:

In its simplest form, selection in programming is an if … then … statement that looks like this:

You can write an if … then … statement to represent the examples of selection in programming that I gave you earlier in this step.

Sometimes you will want to tell your program to take one of two different actions, depending on whether a condition is met or not. Selection allows you to do this using an if … then … else statement.

Look at the following example of selection in the real world, which uses an if … then … statement:

If it is sunny, then play football outside.

In this example, the conditional statement being checked is, “Is it sunny?” If true, the action commences: playing football outside. However, what if the condition were false, and it were not sunny? You can add in ‘else’ and another action to take.

If it is sunny, then play football outside, else play a board game inside.

Another example of conditional statements using if … then … else

Which shoes should I wear?

If the temperature is over 25°C, then put on sandals, else put on trainers.

You can represent the above example as a flowchart: 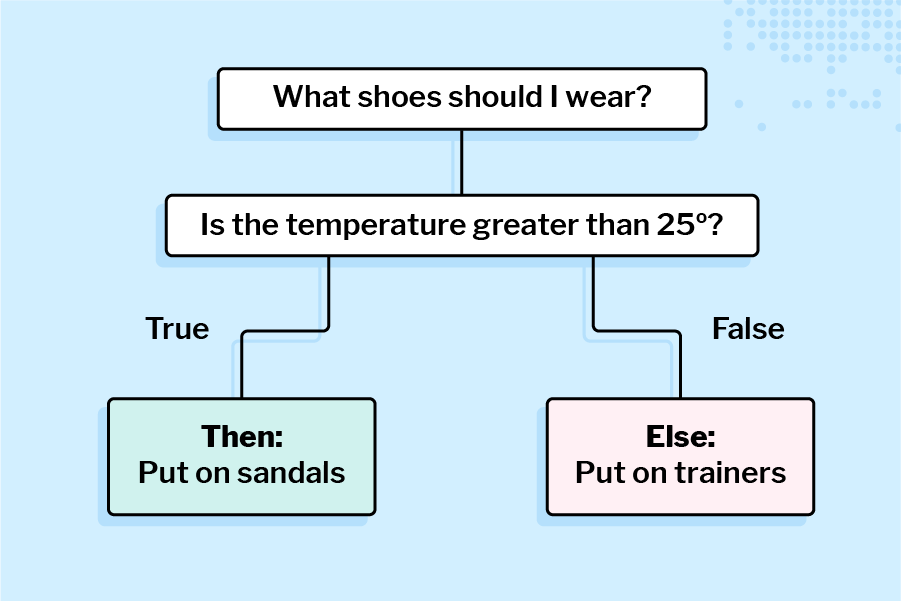 When you are thinking about selection, you should consider if you actually need to use ` … else in your statement at all. If you want a behaviour just to continue if a condition isn't met you don't need to use … else`. In this example the else part isn’t needed:

Using else allows you to choose two different actions: if the condition is met then do something, else do something different.

In the comments section, share some real-life examples of if … then … else statements. Make sure your ` … else` part is not just continuing on with an action!