The Pen extension adds blocks so that sprites can draw on the stage as they move. Read how you can use these blocks to draw patterns here.

Now that I have introduced you to extensions, you are going to use the Pen extension. This extension provides blocks that allow a sprite to draw on the Stage, and you will use this to draw a spiral and some regular shapes.

The Pen category will then appear at the bottom of the blocks menu. 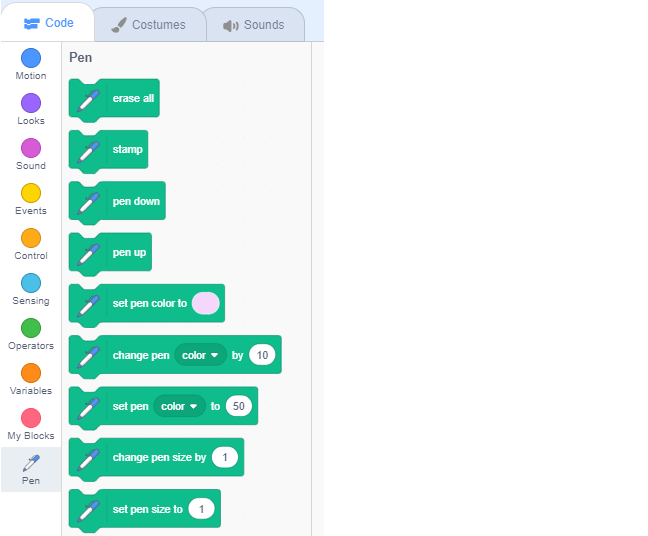 You are going to practice using the Pen extension by combining the: pen up, erase all, set pen colour to () and pen down blocks with other blocks that you have used in this course.

The pen down block will make the sprite leave a pen line on the Stage wherever it moves. When you use the pen up block, it will stop the sprite from drawing a line as it moves around the Stage.

The erase all block removes all the pen marks on the Stage. It is common to use this at the start of a program to erase all the lines from the previous run. 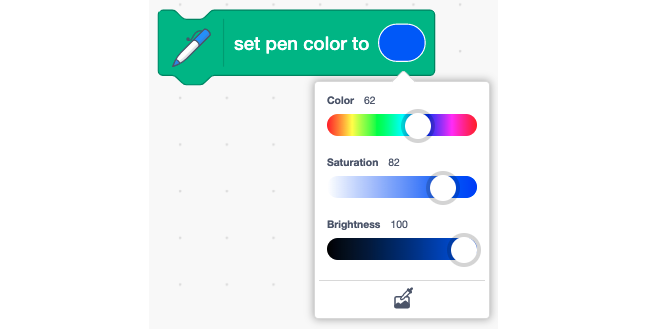 Now that you have looked at the Pen extension blocks, you are going to use them in a program to create a spiral. As you follow the instructions below, think about the purpose of each block.

The sprite draws a spiral on the Stage and stops when it touches the edge of the Stage.

To see what you can achieve by combining the Pen extension and programming concepts from this course to draw regular shapes, investigate this Scratch project, which draws regular shapes . To see the code, make sure you are logged in, and click on the See inside button in the top right of the screen.

This program asks the user “How many sides do you want the shape to have?” The user then types a value as an answer, and the sides variable stores this value. The program then uses a repeat () block to loop around that number of times. On each loop, the sprite will move 50 steps and turn by an angle given by dividing 360 by the value of the sides variable. This value of the angle makes sure that the sprite will draw a full complete shape with no gaps.

You have seen the Pen extension blocks being used in two diffferent projects. Now create a Scratch project of your own that includes the Pen extension, taking inspiration from those projects as well as your own imagination.