Skip main navigation
Home / IT & Computer Science / Introduction to Programming with Scratch / What is Scratch?

Scratch is a visual programming language. Read about how you can use Scratch blocks to program sprites to make animations, games, and other programs.

Scratch is a visual programming language created by the Massachusetts Institute of Technology (MIT) Media Lab. Scratch uses blocks with text to indicate what the block can be used for in a program. Many people learn to use Scratch as their first programming language because it doesn’t involve memorising commands, and is particularly suited to creating visual programs and animations.

To complete the activities within this course, you will need access to Scratch 3, either online or installed on your computer.

When you create a Scratch project, you will program one or more objects known as a ‘sprite’. A sprite appears as an image; you can make a sprite look like a cartoon character, a ball, a butterfly or anything else. You can give instructions to a sprite, telling it to change appearance, move, play music, or react to other sprites.

In the animation below, I’ve given the Cat sprite the instructions to say “Hello” for two seconds, when the green flag is clicked.

You can program a sprite by dragging and dropping the blocks from the Blocks menu on the left onto the Code area in the centre. If you have multiple sprites you will need to select the one that you want to give instructions to by clicking on it in the Sprite list on the bottom-right of the screen. 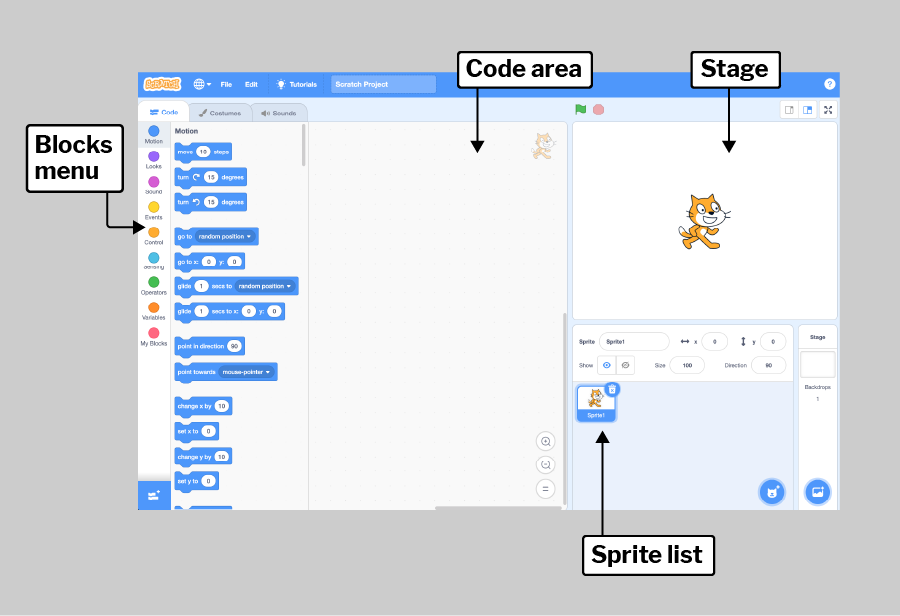 To drag and drop a block using a touch screen device:

To drag and drop using a mouse:

As you move the blocks closer to each other, a grey coloured shadow of the block you are dragging will appear in the correct position if the blocks will snap together.

There are six different block shapes, which help to identify how blocks snap together:

Starts each sequence of instructions. It has a rounded top and a bump at the bottom to snap into other blocks below itself.

Performs the main instructions. It has a notch at the top and a bump at the bottom to snap into other blocks above and below itself.

These contain statements which can be either true or false. They fit inside other blocks, so that those blocks can behave differently depending on if the statement is true or false.

These have rounded edges on both side and fit within other blocks to provide a value such as numbers or text. For example, you can use a block to get the position of a sprite so that you can use that value in other blocks.

These are also known as wrap blocks. You can use these blocks to control if and when to run the blocks that you have placed inside them.

You use the cap blocks at the end of a set of instructions. They have a notch at the top to snap into other blocks, and a rounded bottom so that you can’t snap other blocks onto it.

To help you identify and select blocks, they are split into nine categories. Each of these categories contains several different blocks that you can snap together.

All blocks within a category are the same colour, and perform similar functions. Here are descriptions of seven of the categories. I will introduce the other two categories later in the course:

Controls the sprite’s movement around the Stage.

Changes what the user can see on the Stage.

Controls the sound that is output.

Determines when other instructions run. For example, this could be by waiting before moving on to the next block, or running some blocks multiple times.

Allows your programs to detect changes in your Scratch project, for example, if a sprite is touching another sprite, or how long a timer has run for.

Operator blocks are used to manipulate letters, numbers, and symbols, and perform calculations or compare values. For example, you can use them for adding two numbers together, or searching for a letter in a word.

Throughout this course you will be using different blocks and sprites to create programs that will move sprites around the Stage, use different backgrounds, draw different shapes with a pen, and create music. To complete the tasks and activities in this course ensure you have access to Scratch 3, either online or installed on your computer. If you use the installed version of Scratch, you will not be able to share your projects.