To move your sprite to a particular point on the Scratch Stage, you can use X and Y coordinates. Watch Mark use these to make an animation.

You can describe any position on the Stage by the values of the x and y coordinates. The x value represents the position horizontally (along the X axis of the Stage) given as a value from -240 (on the far left) to +240 (on the far right), splitting the stage into 480 equal steps. 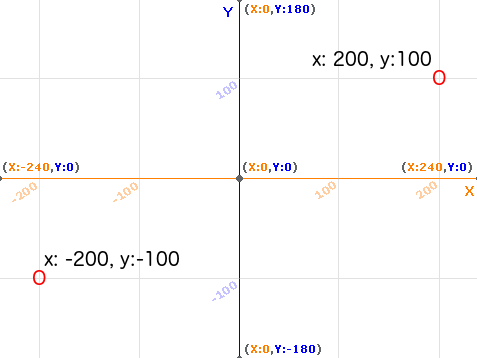 For a sprite, the x and y coordinates refer to the position of the sprite centre, and are shown in the Sprite pane below the Stage:

A common use for this block is when you want the sprite to start from a particular spot before it starts to move in an animation. The animation below demonstrates the blocks needed to snap together in the Code area to position your sprite:

The glide () secs to x: () y: () block moves a sprite in a straight line from its current position to the x and y coordinates specified on the block from the sprite’s previous position. The value of secs (seconds) on the block defines the amount of time it will take the sprite to glide to the new position.

You can use this block to smoothly move a sprite around the Stage, for example, moving a fish sprite around a fish tank in an animation.

Scratch will wait until the glide has finished before running any block connected below the glide () secs to x: () y: () block. This means that those instructions, such as changing costume, will only happen after the gliding movement has completed.

Now, I would like you to create an animation in Scratch, using coordinates. In this animation, a sprite will appear to travel to a castle and move up a set of stairs. Before you program the animation, follow these instructions to add the sprite and backdrops you will need:

Now, use the blocks that you’ve seen in this and previous steps to create an animation of a sprite moving on different backdrops. Start by following the instructions below:

Your blocks should look similar to this:

Your task now is to complete the animation by snapping some more blocks to the sequence. Your program should:

Click on the green flag to run your full animation.

Reflect on how your animation went and any inspiration that it’s given you for creating animations using other backdrops and sprites.