The origins of immersive experiences

This article explores the history of immersive experiences and how humans have been intrigued by fantasy and alternate realities.
© Catherine Allen

To understand the history of immersive media, we first need to briefly address a crucial question – what is it?

Ask most people this question and what pops into their mind is often a set of sci-fi, futuristic goggles.

The history you are about to read in this article is not a history of those goggles. This step covers the history of an ambition – the noble aspiration that humans have had for centuries to create and share fantasy environments, characters and objects that are not present in our current existence. The aspiration to create and augment realities.

This article will introduce you to some historical examples of that pursuit. We’ll discover how humans have become increasingly better at capturing, bottling and sharing human imagination.

Many forms of play involve pretending. These sorts of games simulate a scenario, rather than just representing it through symbols or words. Childhood is rich with pretend games where fantasy is physically acted out. As time has progressed, we have gone on to use technology to bring these playful visions to life, certainly in the field of gaming for example.

The earliest known tangible example of the immersive endeavour is early cave paintings. We know that 17,000 years ago a Paleolithic tribe in southern France used vibrant mineral pigments to paint huge magical bulls, stags, horses, felines and other animals right across every wall and ceiling of their caves. The most famous of these caves now gets called the Great Hall of the Bulls. Archaeologists believe that sandstone lamps and fireplaces were used to not only light the space, but also to create a flickering, moving effect; essentially animating these majestic creatures. 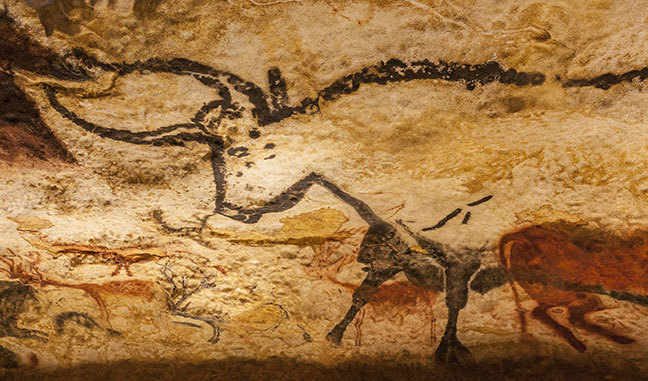 Imagine being deep in that cave with those huge flickering mythic animals surrounding you. The Palaeolithic people may well have combined this with music and performance; a seriously immersive experience.

The practice of 360-degree painting continued to develop throughout the ages, and was especially popular in the medieval period, with full-size room murals known as frescoes. The technique involved using chemicals and treatments to cover walls with huge, jaw-dropping immersive scenes usually evoking the spiritual realm.

Like painting, the theatre also has immersive roots. It started as a form of public ritual, being performed either in the round, as a promenade, or in-amongst the audience members. Medieval mystery plays, for example, would be performed in performance ‘stations’, with groups of actors performing different short ‘playlets’ across a town centre.

“Many audience members would stand – giving them autonomy over their experience, allowing them to either stay at one station and watch every play, or dip in and out, wandering between different stations.” -Hetta Elizabeth Howes, British Library

Striving for immersion is something that has been pursued throughout history. However the question remains; why hasn’t extended reality grown into a more prominent art form, sitting alongside the cultural heavyweights of music, film, theatre and books? One could argue that while people can create experiences that seek to submerge a viewer, these experiences are very hard to scale. Mass distribution is tough. However, this is not to say that these historical examples of immersive art have not been hugely influential. Using frescos again as an example, the practice significantly contributed to the development of perspective in painting. In fact, the first known use of perspective in painting was Masaccio’s The Tribute Money. Illusion subsequently became a standard technique that artists used to invite viewers into their story. This same pattern followed with the development of theatre, music, oral storytelling and more.

Whilst the pursuit of capturing and sharing an immersive experience has been notoriously challenging – and by definition, a ‘virtual reality’ may never be fully realised – the concept of immersion has had enormous influence and likely shaped other cultural forms. With the advanced technology we have today, there is now a very real chance of cementing immersive experiences as an art form in itself. We will cover this next, in part two.