The origins of immersive technologies

In part two of this history of AR and VR, we will look at examples of how the concepts moved on throughout the 19th century and beyond. 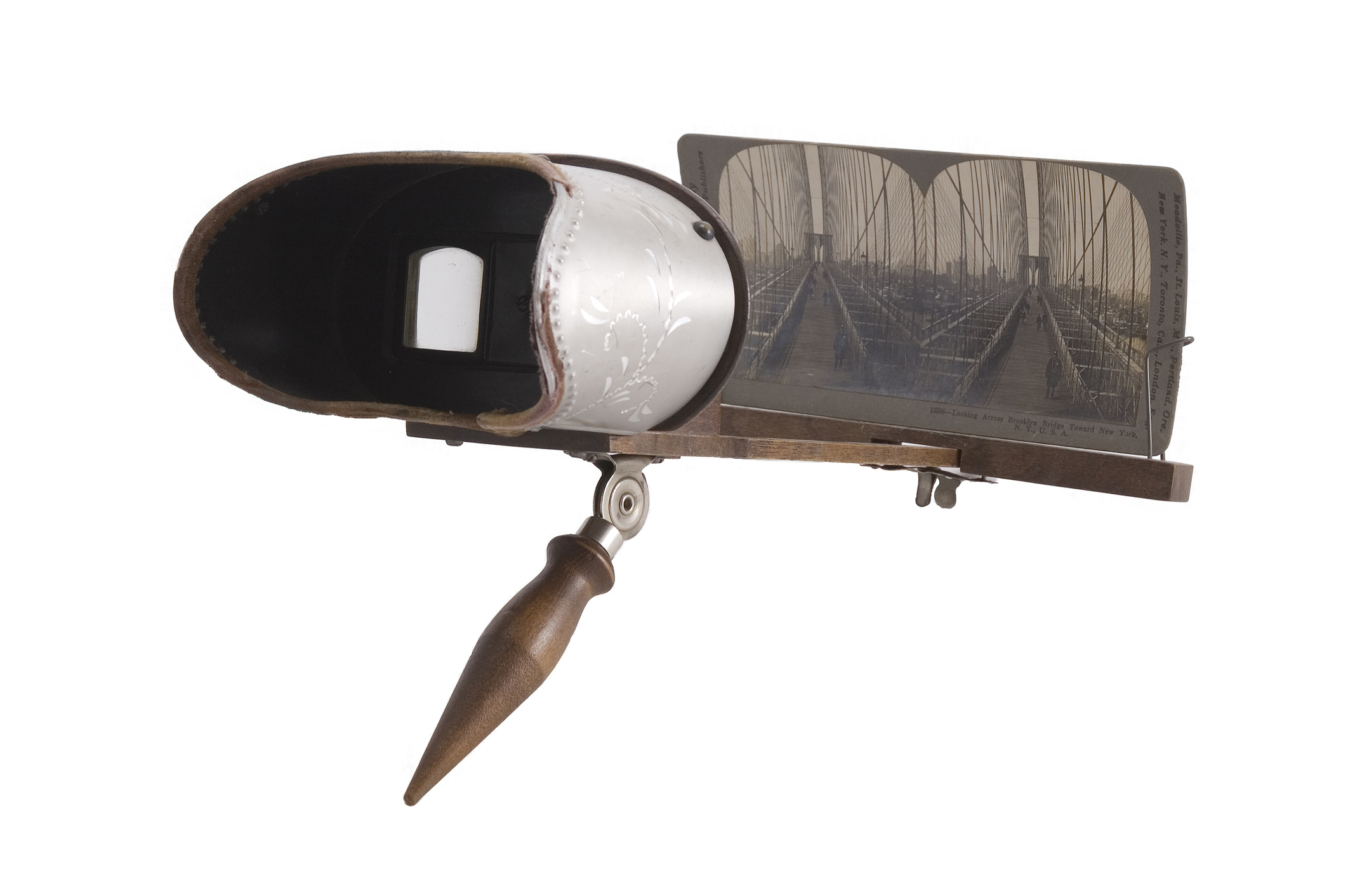 So how did our modern notion of AR and VR come to be?

Like many technological developments today, you can trace today’s AR and VR devices back to the Victorians. The Victorians applied serious innovation to the pursuit of capturing and sharing realities.

The first device that looks like a modern VR headset was invented in the 1830s during the early days of photography. It was called a stereoscope and used a slightly different image for each eye to create a 3D effect. The impact of the stereoscope in the mid-nineteenth-century has often been likened to that of the television in the 1950s. The devices were incredibly popular, being present in most middle and upper-class drawing rooms, as well as in exhibitions and fairs. However, this golden age of the stereoscope ended abruptly in the 1860s with the advent of the more portable and convenient ‘carte-de-visite’ – a type of small photograph.

Just as early photography innovation had initially embraced the solo-viewing experience, so did early film. Like the Stereoscope, Edison’s Kinetoscope had a lot in common with contemporary VR. It was only when the one-person-at-a-time model was found to be not commercially viable, that group cinema culture emerged in the early 1900s.

Let’s now fast forward to the 1960s – to the early days of computing. By now there had already been various philosophical and fictional writings about virtual and augmented reality, so the concept was firming up in the public imagination. MIT computer scientist Ivan Sutherland set out to create a head-mounted AR machine which he called The Sword of Damocles. It allowed users to step into the data; a concept we would now call ‘spatial computing’. Although The Sword of Damocles never was released to the public, Sutherland continued his work in the development of computer graphics. In fact, many in the video gaming industry would today describe him as the father of computer graphics.

A couple of decades later in the 1980’s, ‘tech’ culture was really starting to heat up, with a particular hotspot around the San Francisco Bay area. Not only was the region home to companies like IBM, Microsoft and Atari – but there were venture capitalists keen to invest.

This Silicon Valley money, plus an entrepreneurial punk spirit heralded what is now described as AR and VR’s first wave. Several teams set about to make virtual reality headsets people could actually buy. One of the most influential companies was VPL Research. The company created a whole virtual reality system, including bodysuit, headset and gloves. The dream was becoming a reality; experimental uses ranged from VR for NASA training to groundbreaking immersive art experiences. In 1989, Angels premiered, the world’s first virtual reality movie, directed by Nicole Stenger, and in 1990 Brenda Laurel wrote the seminal text, Computers as Theatre.

While VPL itself filed for bankruptcy in 1990, a generation of other headset makers and artistic pioneers continued to push boundaries. By the mid-nineties, some manufacturing companies were even using VR and AR in their processes. Video game arcades began to include VR machines, Nintendo released their own home VR headset and there was even a major augmented reality dance production performed in Australia, called Dancing in Cyberspace (dir. Julie Martin).

Immersive experiences were in the news and in some homes and offices. But there was a problem affecting mainstream adoption. Many headset users felt sick. People said there was a very limited amount of time they could spend in these virtual spaces before feeling quite nauseous. The reason was latency; the headset graphic movements were lagging ever-so-slightly behind users’ head movements. This small delay was giving some users a similar feeling to that of motion sickness. The concept and technology architecture was there, but processor speeds just weren’t up to it, resulting in cybersickness.

Inventors had got closer than ever before to creating immersive worlds and their attempts had significantly helped develop a new medium of computer graphics. But by the mid 2000’s, AR was barely known, and VR was perceived as one of those inventions that ‘just never took off’. Where to from here?

Luckily, processor speeds were increasing at an exponential rate along with internet speeds. VR, was being used in the giant life simulation platform Second Life. AR was given a major boost in the early 2010’s with the popularisation of the smartphone: QR codes became commonplace and popular AR app platforms like Blippar launched.

Once again, entrepreneurs were beginning to see the opportunities in AR and VR. In 2013, technologist Jeri Ellsworth founded Technical Illusions, and successfully crowdfunded the AR/VR device CastAR. There was clearly demand for her invention: it surpassed its funding goal two days after the project went live, raising over $1 million, despite company problems later down the line that resulted in the funding being returned. At a similar time, student Palmer Luckey also launched a crowdfunding campaign for his own device – a VR headset called an Oculus. It also achieved well above its funding target.

Larger tech companies were well aware of this increase in consumer interest and rapid innovation progress. 2014 was a landmark year: Palmer Luckey sold Oculus to Facebook for $3 billion and Google released their AR glasses, Google Glass to the public. Google Glass never took off (after much public mockery), however other tech giants including Samsung, Microsoft, Sony and HTC also got to work developing AR and VR headsets. By 2016 there was a whole suite of AR and VR headsets available on the market.

As for AR on smartphones, often without even realising it, mainstream smartphone users had been regularly experiencing augmented reality, with the hugely popular releases of Snapchat’s lens filters and Pokemon Go.

We’re now in the thick of this wave of virtual and augmented reality. Millions of people actually use immersive technology every day. The conditions are in place for it to finally go mainstream and be considered a media form that sits comfortably alongside film, photography, radio, websites and books. An industry around this medium is in the process of being built and it really is all to play for.