基本的な装訂の種類5 – 袋綴
View transcript
3
Next, I will explain the fukurotoji or “pouch” binding method. Just as with the detchōsō and tetsuyōsō methods, the leaves are folded in half before binding them, but the positioning of the fold is different. In fukurotoji books the fold comes on the outer side of the book and it is the loose side of the pages that gets bound, so the paper, as you can see, looks a bit like a pipe or tube, which means that only one side of the leaf, the front side, is used. Because there is no need for thick paper that can be used on both sides, most books were made using the thinner kōzo (choshi) paper.
55
First, the leaves are folded, then they are stacked up and fastened with simple paper strings called koyori. If the book was intended for study or home use, the title would often be written directly here and the book would be left without a cover. Such books still belong to the fukurotoji category, but as they are only partially bound, they are known as <li>karitoji</i>bon (half or partially-bound books). There are two ways to make a <li>karitoji</i>. The most common is to punch two holes through the stacked leaves, pass the strips through each of them, and then fasten them as in this example here.
105
In this example here, I think you can these three small circles here, you pass the strips through each hole, leave a bit more than the thickness of the book, then you work the part that sticks out with your fingers, and finally you flatten it in with a wooden mallet until it resembles the head of a metal nail. You repeat the process on both sides. This is called shiteisō (“paper-nail” binding). It was particularly common in fukurotoji books dating from pre-Muromachi, pre-16th century times. Sometimes the binding was removed when the book was disbound for repairs, but generally speaking the shiteisō tends to be used in older books so it merits special attention.
168
The problem is that when the book has a cover, as in this case, it is not so easy to tell whether it was bound using the <li>karitoji</i> or shiteisō method. So what you do is run two fingers here along the thread and feel the part that bulges out to see if it is round or long and narrow, and from that you can sometimes tell how it was bound. Edo-period printed books―the item you see is a printed book― were usually bound using the fukurotoji method. Because of it popularity, a huge number of them was produced, so much so that when people today think of traditional Japanese books the image they tend to picture is that of a fukurotoji book.
227
That’s just how popular the method was. It is not easy to say when the method first started to be used, but if we look at very early examples, they tend to have writing on both sides of the paper. We noted earlier that fukurotoji books only have text on one side. Because paper was so valuable in early times, it was not discarded after one use but was kept to be reused. For instance, people might keep the letters they received, turn them over, and use the available side to make a fukurotoji to make a personal copy of a book. In this book, the thread has now come off, but originally it was bound as a fukurotoji.
278
This book is in fact a rather interesting case. It has writing on the reverse, and that writing is a Buddhist sutra. Originally a scroll, it was cut into segments, which were then turned over and used to make a fukurotoji book. It is an extremely rare example. Sometimes fukurotoji books can have such rare histories, so it is important to be aware of it. Next, perhaps it is not entirely accurate to discuss these alongside fukurotoji books, but their appearance, the fact that they are bound with thread, they look like fukurotoji books. But as you turn the pages you realize that there is a fold at the bottom of every page, as in the origami tetsuyōsō.
340
They have the crease here at the bottom, were cut along this side, bound using the <li>karitoji</i> method, and then the cover was added. Such books are called nagachōtoji (“wide” binding). You occasionally come across handwritten books bound using this type of binding, but printed books in this format, including the one I am looking at now, tend to be by the Kyoto bookseller Hachimonjiya. That’s it for pouch binding. 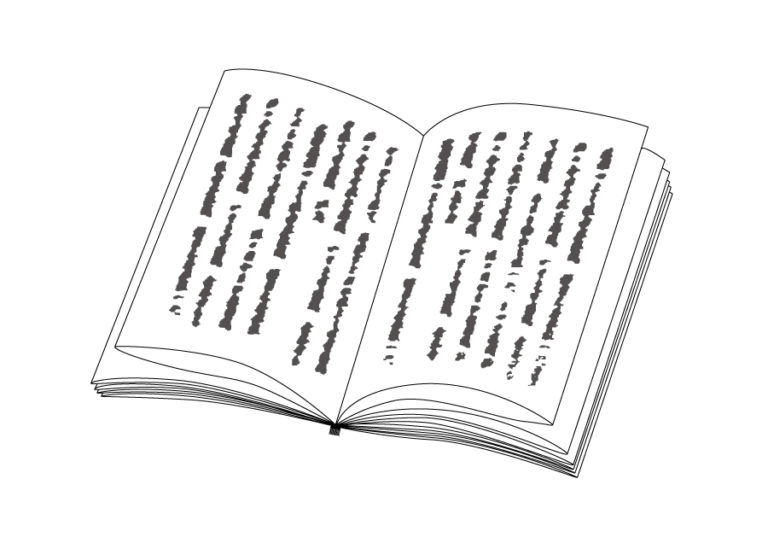