How the unique geography of the Yellow Sea made MacArthur's famous landing possible. 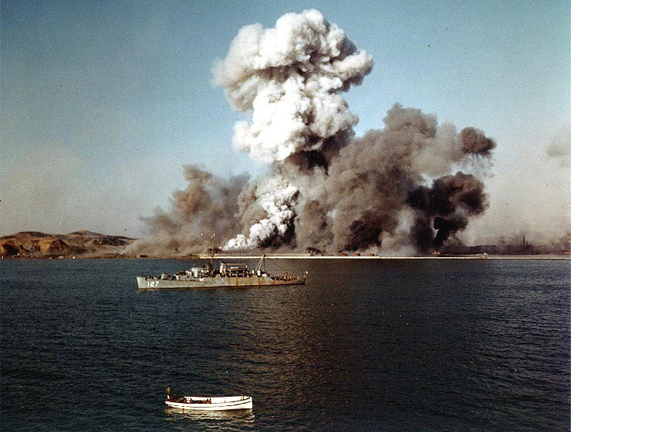 A half-century after Japan’s romp through Korea from south to north, North Korea’s surprise invasion in June 1950 started as a romp from north to south. Summer turned to fall, and South Korean and US troops were hanging on to the Busan Perimeter by a thread. The Soviet bloc looked poised to win the first hot war of the Cold War. But once again—like the 1590s and 1890s—Yellow Sea access proved decisive in reversing the course of war. Although the KPA was a formidable fighting force, North Korean had no navy to speak of (Chinese naval capabilities were also limited—one reason Chiang Kai-shek was safe in exile on the island of Taiwan). Fixated on breaking through the Busan Perimeter, Kim Il Sung failed to take sufficient precautions against possible rear-guard coastal landings. Mao worried that an American amphibious expedition could sneak through the Yellow Sea back door to the Korean Peninsula, but the North Koreans did not heed Mao’s advice.Kim may have ignored Mao’s warnings because he thought he knew the geography of the Korean west coast better than his ‘elder brother’ in far away Beijing. The shallow depths, scattered islands, rapid currents, and tidal shifts made for a highly inhospitable landing for a large invasion force. Incheon in particular was infamous for its tidal range, which would leave U.S. General Douglas MacArthur’s armada only a brief window of time to unload marines and materiel. MacArthur correctly anticipated that Kim would not expect so bold a gambit from the Americans.At dawn on September 15, 1950, MacArthur’s fleet—Americans, British, and Canadian, fighting in the name of the United Nations—unloaded at Incheon with minimal casualties.The North Koreans had forgotten the lesson of 1592 and 1894, that keeping the Yellow Sea backdoor shut tight and bolted down was essential to the security of the Peninsula (if not China as well). Lacking command of the Yellow Sea, or even the ability to deny access to the enemy, North Korea was unable to press its advantage to “final victory”. Territorial reunification slipped out of Kim’s grasp.The KPA suddenly faced Americans both in front and behind. The North Korean front line at the Perimeter punctured like a burst balloon, and South Korean infantry broke through and wiped out their forward positions. Now it was the northerners’ turn at an ugly withdrawal. As they attacked northward, South Korean commanders like General Paik Sun Yup winced at playing second fiddle to the Yankee army. In a scene reminiscent of the tensions between Ming and Joseon commanders during the Black Dragon War, Paik finally decided to confront his US superior in order to demand a role in liberating Pyongyang, his own hometown. At first, his emotional plea fell on deaf ears. But when Paik used the military history of how the Japanese took Pyongyang in 1894 to suggest a pincer attack with his Korean troops in a staring role, his American superior came around.The ides of September marked the second turning point of the Korean War, as the American “liberators”/”imperialists” used the tides of Incheon against the North Koreans. MacArthur’s “envelopment” strategy reversed the entire flow of the war, as the UN Army began pushing North Korean forces north.
© John Delury

Hi there! We hope you're enjoying our article: Yellow Sea backdoor
This article is part of our course: Lips and Teeth: Korea and China in Modern Times