This article gives a brief introduction to the motion of comets. 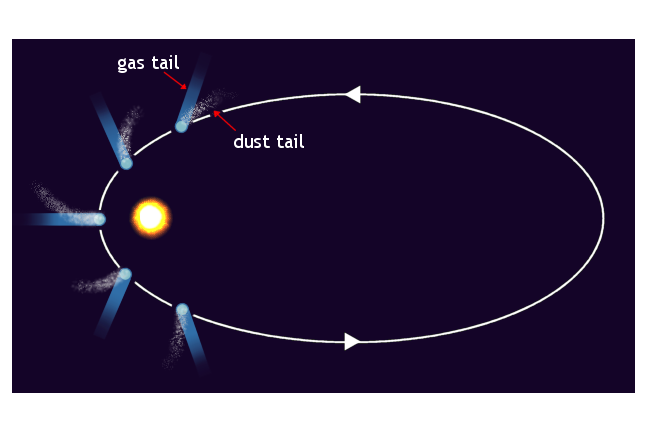 Understanding the motion of the objects in the night sky is almost surely the greatest historical problem in science. This situation really only became understood in the 17th century, with the pioneering work of Copernicus, Galileo, Tycho Brahe, Kepler and Newton. In this step we learn about

The ancient Greek astronomer Ptolemy theorised that the visible planets — Mercury, Venus, Mars, Jupiter and Saturn — travel around the earth in orbits called epicycles, obtained from the motion of imaginary smaller circles rotating around imaginary larger ones. With the Copernican revolution around 1500, people started to realise that the earth was another planet too, and that all planets revolved around the sun! But what shape are their orbits?

View Course
The detailed empirical observations of Tycho Braye allowed Johannes Kepler (1571-1630) to deduce his famous Laws of Planetary Motion. Kepler’s First Law states that the orbits of the planets are ellipses with the sun at a focus. The Second Law states that the area swept out by the line segment joining the planet to the sun within in a given period of time is constant regardless of where the planet is in its orbit. Finally, the Third Law asserts that the period of a solar orbit is proportional to the \(\normalsize{\frac{3}{2}}\)-power of the average distance to the sun. We will be talking about this more next week.Isaac Newton (1643-1727) then famously showed that Kepler’s laws actually followed from the Inverse square law of gravitation, a remarkable mathematical tour de force which helped establish calculus as the new tool of choice to explain motion in the physical world. In fact Newton showed that the motion of one body around the other was a conic section, but it could be either an ellipse, parabola or hyperbola.

The distinguishing feature between these various types of orbit is the eccentricity. Ellipses have eccentricity less than one, parabolas have eccentricity exactly equal to one, and hyperbolas have eccentricities larger than one.As Newton realised, comets have trajectories which also obey Kepler’s Laws. Halley’s comet, named after a contemporary of Newton, is the most famous one, and it becomes visible to the naked eye every 76 years when it nears the sun. It was depicted already in the Bayeux Tapestry that chronicled the Battle of Hastings of 1066.Not all comets are return visitors however; some pass by our interstellar neck of the woods only once, on orbits which are hyperbolic. Actually the eccentricities of most known comets are very close to 1, so the shape of these orbits is quite close to being parabolic, at least while they are here in the solar system.In the diagram below we see the near-miss of the one-time comet Siding Spring, which passed within 140,000 km of Mars on October 19th 2014. This is less than half the distance between the Earth and the moon, so was a rather close shave! The eccentricity of this comet was \(\normalsize 1.00043\), which is almost parabolic, but it is actually a hyperbola.

Mars By NASA/JPL-Caltech Public domain via Wikimedia CommonsThese days we do not spend so much time gazing at the night sky in wonder, and most of us would have difficulty knowing where the planets are on any given day. So it is perhaps harder for us to appreciate the enormous revolution in thought that the work of Copernicus, Galileo, Brahe, Kepler and Newton brought us: a simple and elegant explanation for the motion of the planets. Planetary motions, when examined through calculus, can be seen as a physical manifestation of the geometry of the conic sections studied by the ancient Greeks and identified by Descartes as second degree curves.This remarkable confluence of geometry, algebra, physics and astronomy really set the stage for the transformation of the modern world — the idea that we could actually peer into the inner workings of the universe, and find a simplicity and regularity ruled by mathematics.

If you would like to know more about the history of this remarkable chapter in the story of human understanding of the world around us, check out Norman’s MathHistory lecture on Mechanics and the Solar System. What are your thoughts about this fascinating story?Have you ever seen a comet?
© UNSW Australia 2015

Hi there! We hope you're enjoying our article: Comets and eccentricities
This article is part of our course: Maths for Humans: Linear, Quadratic & Inverse Relations