We look at a fundamental relation in electronics and physics. 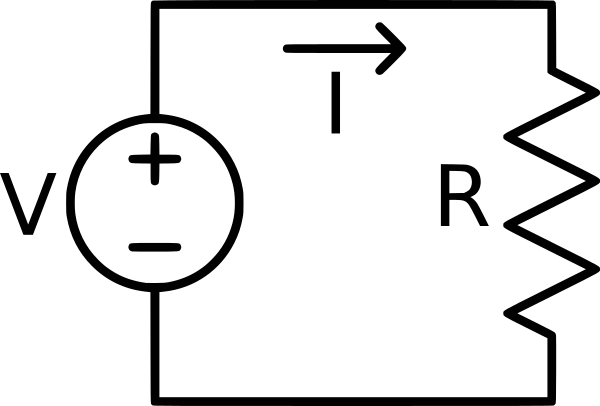 Ohm’s law was discovered by Georg Ohm in 1837 and it is the basic equation that governs a lot of circuitry. The three main ingredients are the current through a simple circuit, the voltage applied (typically by a battery), and the resistance of a device which uses the current to produce some work, typically heat or light. In this step, you will learn about

Toaster Filaments Nick carson at en.wikipedia CC BY 3.0, via Wikimedia Commons However we can look at the law in other ways. If we regard the voltage (normalsize{V}) as fixed, then the resistance and current are inversely proportional, since their product is constant and equal to the fixed voltage. If we increase the resistance, then the current decreases, while if we decrease the resistance, then the current increases. This is the situation with a circuit run by a battery, or with the electricity in our house, where the voltage supplied is constant ((normalsize{110-120}) volts in most of the Americas, (normalsize{220-230}) volts in Europe, Australia and most countries in Asia). However strictly speaking in this case the voltage is alternating in direction. In the limiting case where the resistance becomes zero, for example if you replace the toaster with a wire, then an indefinitely large current flows. Then a short erupts, often with disastrous consequences, particularly if you don’t have a fuse connected to break the circuit in such an emergency situation.

Q1 (E): An electrical device is connected to 120 volts. Find the current if the resistance is 480 ohms.
Q2 (E): Suppose that we have a battery of some constant voltage lighting a small lamp, and an ammeter reads 40 mA, where mA stands for milliamps, which are one thousandths of an amp. If the current drops to 20 mA, what has happened to the resistance?

A resistor is any device that slows down the flow of current in a circuit. Electricity is essentially moving electrons, and much like water, if the flow is interrupted, restricted or resisted, less gets through. Some materials have low resistance, such as copper wire, which allows electrons to flow through it without much trouble at all. Other materials, such as wood, have high resistance, stopping electrical flow almost immediately. In practice we have things like lamps and toasters that generate light or heat from the electrons, slowing them down, but still letting them through.
Ohm also discovered another law, that describes how much resistance a given material, such as a piece of wire tube, has:
[Large R=frac{rho L}{A}]
where (normalsize L) is the length of the resistor, (normalsize rho) is a quantity that depends on the material, and (normalsize A) is the cross-sectional area of the resistor. So (normalsize R) is directly proportional to the length (normalsize L): double the length of the wire tube and its resistance doubles. But (normalsize R) is also inversely proportional to the cross-sectional area (normalsize A): double the area and the resistance halves.

In order to understand Ohm’s law, a hydraulic analogy for beginners is sometimes useful. Imagine water flowing through a horizontal pipe. The water pressure (normalsize P) is analogous to voltage (normalsize V) because it is a pressure difference between two points along the pipe that causes water to flow. The actual water flow rate (normalsize F) is then the analogue of current (normalsize I).
What about the analogue of a resistor? That can be imagined as something which obstructs the flow of water, such as restrictions or apertures placed in the pipes. If the water is forced through a very thin tube, then the longer the tube and the smaller its cross-sectional area, the greater resistance (normalsize R) it will have on the water flow rate (normalsize F). And the greater the resistance, the less the flow.
The relevant equation for our hydraulic analogue is, in appropriate units,
[Large P=FR.]
So if we keep the pressure fixed, then the flow rate and restriction will be inversely proportional: as the size of a restriction (normalsize R) decreases, the flow rate (normalsize F) must increase.
In the figure below, we would expect that the thinner tube would act like a resistance to the flow in the large tube.