Areas under a hyperbola and the function ln x

In this article, Norman Wildberger explains a remarkable property of areas under the function y=1/x. 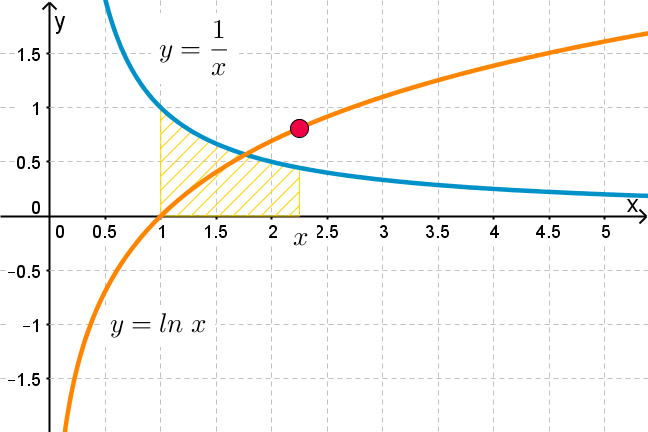 The function \(\normalsize{y=\frac{1}{x}}\) has some remarkable properties if we look at the areas underneath it. This question of how much area is under a particular graph is one of the two central problems of calculus. But sometimes we can derive surprising relations without calculus, as we do here. In this step, weThis is a more advanced step, but if you go carefully, then you can follow all the arguments, which are really quite spectacular in their consequences!

But other kinds of areas under this graph are also interesting, and exhibit an interesting property when we scale things.

Q2 (E): Explain why the two rectangular areas are equal.

A mixed dilation of the plane

View Course
\[\Large{\phi(P)=[2x,\frac{y}{2}]}.\]
This is a stretch in the horizontal direction by \(\normalsize{2}\), and at the same time a shrink by \(\normalsize{\frac{1}{2}}\) in the vertical direction. So \(\normalsize{\phi}\) does not change the areas of rectangles. And since general regions are made up (approximately) of rectangles, we can reason that although \(\normalsize{\phi}\) will change the shape of regions, it will not change their area.
But what do we mean by area of a region? Although we have a clear understanding of areas of rectangles, the definition of “area” for a curved region is much more problematic logically. The 17th century mathematicians already realised this. In practical applied mathematics we just assume that the term consistently extends to more complicated curved regions, but in pure mathematics trying to pin the term down embroils us in all kinds of subtle issues.
So let’s adopt a pragmatic attitude, not worry about the logical difficulties, and so assume that the word “area” really makes sense even for regions bounded by graphs like \(\normalsize{y=\frac{1}{x}}\).

In fact in some treatments of calculus, the function \(\normalsize{\ln\;x}\) is defined precisely this way — as the area under \(\normalsize{y=\frac{1}{x}}\) from \(\normalsize{1}\) to \(\normalsize{x}\). So a large part of the calculus that deals with logarithm and exponential functions ultimately hinges on the remarkable hyperbola \(\normalsize{y=1/x}\) and its geometrical properties!

Hi there! We hope you're enjoying our article: Areas under a hyperbola and the function ln x
This article is part of our course: Maths for Humans: Linear, Quadratic & Inverse Relations