What is public service media?

This article offers a definition for public service media (PSM), covers its values, purpose, and its level of trust in different countries.
© University of East Anglia

What is public service media?

Public Service Media (PSM) is an extension of public broadcasting. 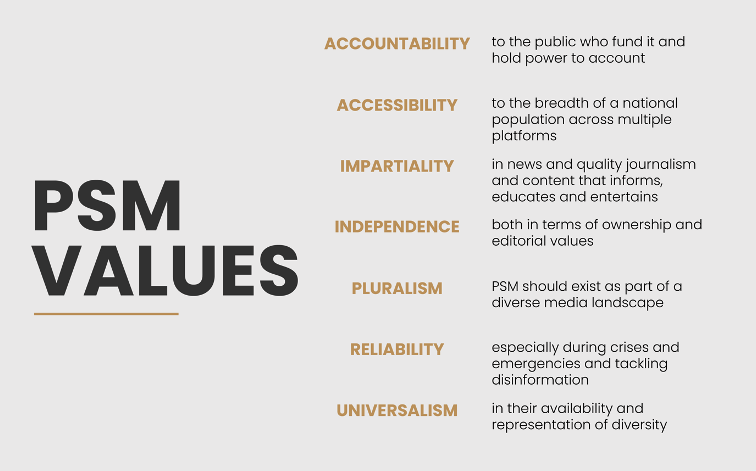 UNESCO defines public broadcasting as broadcasting that is “made, financed and controlled by the public, for the public. It is neither commercial nor state-owned, free from political interference and pressure from commercial forces.”

While this quote refers to “broadcasters”, public service media extends this definition and refers to public broadcasters in the contemporary digital media era, where they provide services across multiple platforms in addition to TV and radio.

So, public service media counts as ANY media – whether it is TV and radio or digital media – that is owned or funded by the public and is therefore accountable to them. They usually have the core remit to “Inform, Educate and Entertain”, a set of principles that originated along with the BBC in 1922. This is the widely accepted understanding of public media in its purest form.

The purpose of public service media

The main purpose of public media is to provide a variety of quality content that is universally accessible on a national level. This includes providing reliable information to the public so that they can participate in society in a meaningful way, such as reliable COVID-19 information or rigorous and impartial election coverage.

The core values of public service media can be found in the image at the top of this section.

Adhering to the values of PSM

Adhering to these values is what makes public media among the most trusted media institutions and considered essential for informed democracy. In the 2020 Reuters Institute Digital News Report, public media consistently ranked above their commercial competitors in terms of trust in consolidated democracies around the world.

However, public media requires rigorous legal and regulatory protections to maintain their independence from political and commercial interference, while a public source of funding (licence fee or tax) helps to ensure that they are accountable to their audience.

Such measures require strong support for press freedom and an understanding from political leaders of the role public media plays, regardless of how critical of power and authority it appears to be.

The graphic below shows the level of trust experienced by PSM in Australia, Germany, South Africa and the UK, with comparisons to some commercial outlets. While trust in the BBC seems much lower than in other countries, it still receives the highest level of trust compared to other news outlets.

This lower value represents growing scepticism in the UK towards news media in general. 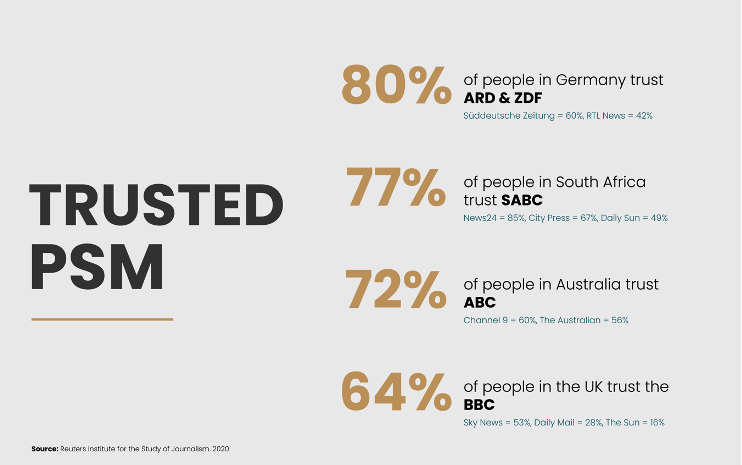