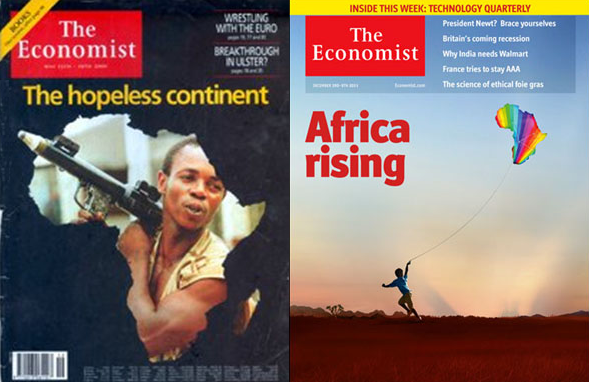 In recent years, scholars have noted a gradual shift in media representations of Africa: from Afro-pessimism to Afro-optimism.

This shift is perhaps best illustrated by the two front-page covers of The Economist magazine featured above. The first, headlined “The hopeless continent” was published in 2000. The second, titled “Africa rising”, appeared in 2010. Just ten years apart, they seem to convey a radically different representation of the continent. Afro-optimism emphasises Africa’s of modernity, exudes positivity, and celebrates ‘Africanness’. It consists of messages and images that highlight notions of technological progress, economic growth, political reform, and Africa’s dynamic and vibrant cultures.

On the surface, Afro-optimism may be considered a cause for celebration: gone is the old-fashioned, stereotyped and often racist media portrayal of Africa as the ‘dark continent’ blighted by extreme poverty, protracted conflicts, and deadly pandemics like HIV/AIDS. A study by Bunce (2016) that compared international news coverage of Africa in 1994 and 2013 found that:

Taken as a whole, news coverage of Africa has become significantly more positive in tone. In addition, there has been a decrease in stories that focus exclusively on humanitarian disaster… These results suggest that we may finally be moving beyond a reductive and negative “single story” dominating the international news coverage of the continent (Bunce, 2016)

Of course, this does not mean that Afro-optimism has entirely replaced Afro-pessimism. Nonetheless, the rise of Afro-optimism is seen by some observers as a welcome way “to correct the historical over-representation of negatives” (Nothias, 2018) in media representations of the continent.

But is that really the case? Other scholars argue that Afro-optimism and Afro-pessimism are effectively two sides of the same coin: both paint an equally reductive, selective, simplistic, and homogenous image of the continent.

Furthermore, with its emphasis on economic growth, untapped markets, and boundless investment opportunities, Afro-optimism is perhaps unsurprisingly prominent in major business publications like The Economist or Forbes. This tells us something about the underlying social and economic interests that this perspective serves. In an analysis of Afro-optimistic imagery, Nothias (2014) asks whether “rebranding Africa as fit for inclusion on the global economic stage” may in fact be preventing “critical engagement with issues of economic and social inequalities”?