In this article based on a paper by Roesel et al., Bassirou Bonfoh explains the difference between hazards and risks.
© University of Basel
Unsafe food causes many acute and lifelong diseases, ranging from diarrhoeal diseases to various forms of cancer. The World Health Organization (WHO) estimates that foodborne and waterborne diarrhoeal diseases combined kill about 2.2 million people annually, of whom 1.9 million are children. Foodborne diseases and threats to food safety constitute growing concerns to public health and local economies. Of the five most important pathogens causing disease in citizens of the United States of America, four have an animal reservoir, while more than 80% of identified deaths from foodborne illness are caused by only three zoonotic pathogens: Salmonella spp., Listeria monocytogenes and Toxoplasma gondii. Poultry is the food most often implicated (25%) but beef, pork, shellfish and fish were also important, each causing more than 10% of the total.Many studies focus on the identification of hazards in animal-source foods but do not estimate the consequences and impacts of the hazards in terms of human sickness and death. Without this information, it is difficult for decision-makers to rationally allocate resources for risk management. Identification of hazards has led to media scares and consequent loss of confidence in livestock products. The resulting dramatic drops in consumption have negative impacts on the livelihoods of those engaged in the food value chain as well as consumer nutrition.Studies on milk in East Africa found that although zoonotic hazards were present in as much as 1% of household milk samples, infections in people were at least two orders of magnitude less common. While the small volumes of milk produced and handled by informal sector agents increased the risk of cross-contamination, the widespread consumer practice of boiling milk dramatically reduced the risk of disease.A hazard is defined as any biological, chemical or physical agent that is reasonably likely to cause harm or damage to humans, other organisms or the environment in the absence of its control. Risk is the likelihood of that anticipated harm to occur, including the consequences for public health, ecology and the economy. Hazards can include, but are not limited to, microbial pathogens that cause foodborne illnesses with symptoms such as diarrhoea and fever, pesticides that cause poisoning or motor vehicles causing car accidents. Identification of hazards is the first step in performing risk assessment. Case studies presented by Roesel et al. (2014) show that there are microbial, chemical and physical hazards in food.Historically, hazards associated with livestock and animal-source foods were managed through ‘command and control’ regulation involving inspection and production, transformation and sale, backed with litigation in the event of harm. This approach was increasingly unable to deliver food safety.For the last decade, risk analysis has convincingly dominated food safety and trade in animals and animal products. It offers a science-based, structured, transparent method for answering the questions that matter to policymakers and the public alike: ‘Is this food safe?’ ‘Is the risk big and important?’ ‘What efforts are appropriate to reduce the risk?’ 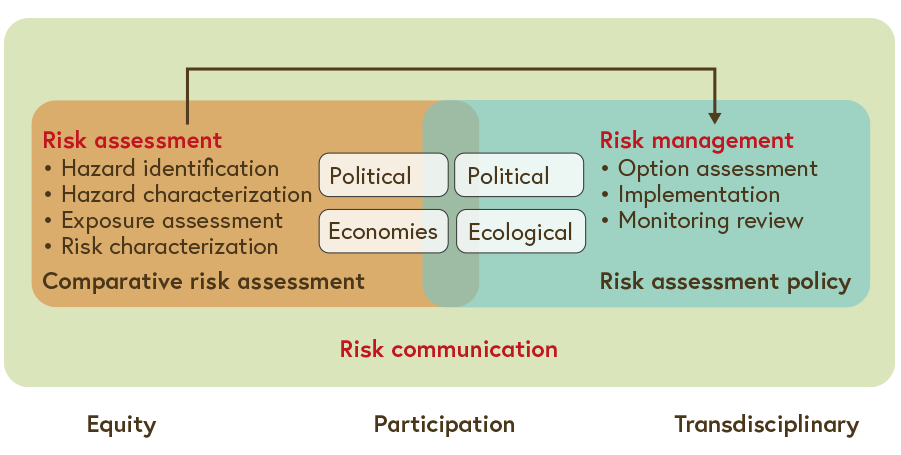 Image three: participatory risk analysis framework, which includes a participatory approach as well as cost-benefit and cost-effectiveness analysis adapted from Roesel et al. 2014The first step, risk assessment, provides both an estimate of harm and the probability of harm occurring. After identifying and characterising the hazard, the next step is assessing to what extent consumers are exposed to the hazard. This helps to understand the ‘real risk’ associated with the presence of a harmful agent. By assessing the concentration of hazards in food and the number of people who handle the contaminated product, and by determining the frequency and quantity of consuming this food, it is possible to evaluate the risk to individuals and groups of people in a particular area. The data based on evidence eventually allow public health authorities to set threshold levels of contaminants in food such as ‘accepted levels of protection’.To be useful, risk assessment must be followed by action to mitigate those risks which are unacceptable to stakeholders. Risk management uses pathway approaches, eg ‘from stable to table’, and probabilistic modelling to identify critical control points and apply strategies to remove or minimise risk. The third, and integral, component of risk analysis is risk communication: the iterative process of communicating risk to those affected by it and incorporating their feedback into risk assessment and management. Risk analysis offers a new approach to managing food safety. Not only is it more effective at decreasing risks, but it can also be a bridge joining food safety and livelihood concerns.Like all dominant ideas, risk analysis is not without criticism. People argue that risk analysis is quantitative and reductionist and does not take into account people’s legitimate concerns, and that information emerging from risk assessments is meaningless or invalid. Some go even further, believing that risk assessment is part of a conspiracy organised by agro-business. While many of these concerns are refutable on technical grounds, this does not address underlying fears and concerns that lead many to reject, for example, vaccines, genetically modified food, pasteurised milk or fluoridated water.Based on previous analysis and research, incorporating participatory methodologies can improve stakeholder engagement in risk analysis. Since their introduction in the 1970s, participatory methods and techniques have become central tools for community development and been applied in a variety of contexts and sectors. These techniques are promoted on the basis that they are more effective, more sustainable, less costly and more ethical in their inclusion of the poor in the planning and decisions that affect them and have been extensively used in livestock research.

Hi there! We hope you're enjoying our article: Food hazards and risks
This article is part of our course: One Health: Connecting Humans, Animals and the Environment