Read about Hugh Quarshie's reflections upon the role of race in Othello. 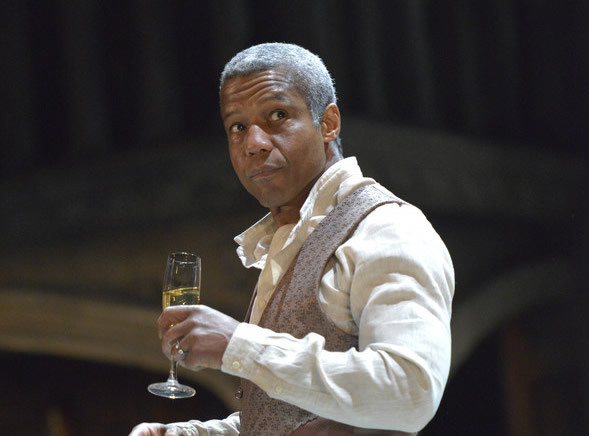 In Shakespeare’s time Londoners would have discovered that a new play was going to be performed by reading a playbill attached to a post in the district near to the theatres. They would have been told the name of the new play, Othello, The Moor of Venice, and little more. Today there is often a lot of publicity announcing a new production months in advance, and newspapers will often publish interviews with directors and actors to get people excited about a show before it hits the stage.Actors are often asked how it feels to be stepping into a role that many famous actors have played in the past, and directors are often asked whether they have been exploring any particular ideas during rehearsals. The fact that Hugh Quarshie had written an important essay about Othello seventeen years before he came to play the role proved particularly interesting to journalists in the run-up to the RSC production in 2015.In his essay “Second Thoughts About Othello” Hugh Quarshie examined Shakespeare’s presentation of the Moor and came to the conclusion that,

It is his credulity which diminishes Othello as a tragic hero and therefore diminishes the tragic effect. Of all the tragic flaws in Shakespeare’s characters – pride, procrastination, ambition, among others – credulity is the least likely to engage sympathetic understanding. It is Othello’s credulity which alienates him from our sympathy, as his colour alienates him from Venetian society. And Shakespeare seems to suggest that his colour and his race explain his credulity, his jealousy and his violence. (Quarshie, 14)

Quarshie argued that “Shakespeare did not explode but exploit the convention of the barbarous Moor for his dramatic ends” (Quarshie, 20), and feared that “by personifying a caricature of a black man” actors risked “giving it credence” (Quarshie, 18). Having clearly outlined some of the difficulties presented by this play he went on to suggest how these problems could be overcome:

I think it would be possible to produce a version of the play which shifts the focus away from race and onto character. It might still be impossible to avoid the conclusion that Othello behaves as he does because he’s black; but it might be possible to suggest that he does so not because of a genetic disposition towards gullibility and violent jealousy, but for compelling psychological, social and political reasons; that he behaves as he does because he is a black man responding to racism, not giving a pretext for it. (Quarshie, 21)

Writing at the end of the 20th century Hugh Quarshie was able to reflect upon some of the ways in which issues surrounding ‘race’ had played a major role in shaping audience’s attitudes towards this play over time. In order to enhance your understanding of Quarshie’s comments you might find it useful to view the following resources:

Having read the extracts above:
© Royal Shakespeare Company

Hi there! We hope you're enjoying our article: Second thoughts about Othello
This article is part of our course: Othello: In Performance